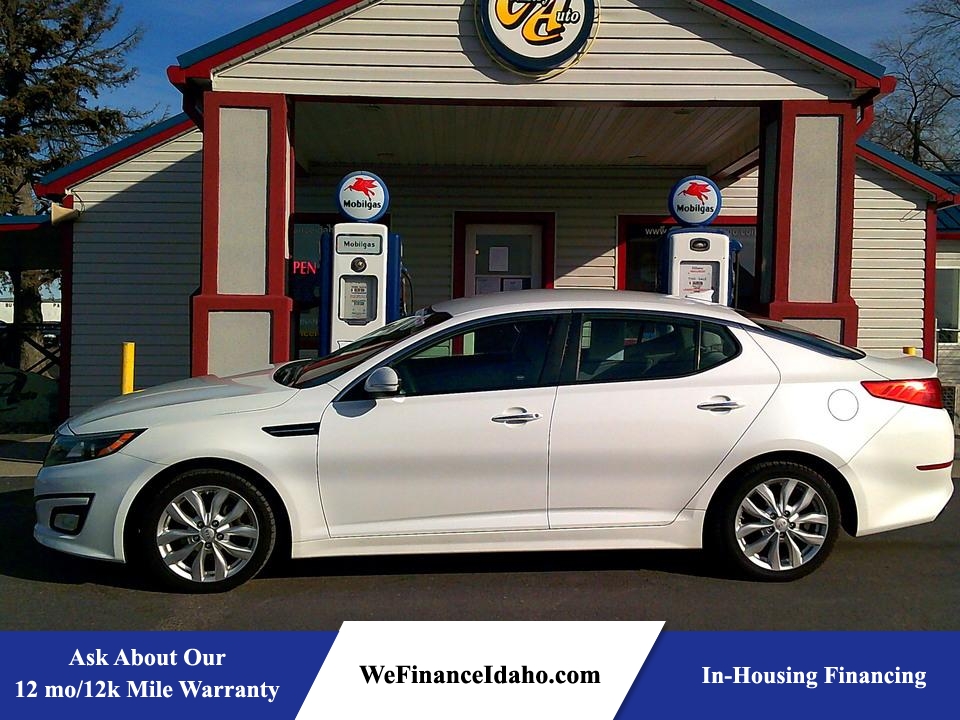 Thanks to evocative styling and an impressive set of features, the 2014 Kia Optima is one of our top picks for a midsize sedan.

The Kia Optima cruises into 2014 with a variety of small changes. On the outside, you'll find updated front and rear styling. Inside, Kia has improved the front seats for greater comfort and restyled the steering wheel. There are also some new features, including a blind-spot monitoring system, rear parking sensors and new display screens.

Family sedans have traditionally had a certain bland aesthetic as automakers have calculated that safe and inoffensive styling will appeal to the widest possible market. But a few years ago, Kia showed how it's possible to buck that conservative tradition with its stylish Optima. With sheet metal that's bold enough to be genuinely striking, the 2014 Kia Optima makes an assertive statement, and is an ideal choice for the buyer seeking family transportation that stands apart from the pack.

Of course, there's more to the Optima than its attractive fascia. There are two different powertrains available, including two gasoline-powered engines and one gas-electric hybrid, all of which are powerful and efficient. The Optima's modern cabin is pretty comfortable and can be fitted with rather impressive features such as ventilated front seats, heated rear seats and a voice-command system. Kia has upped the Optima's safety features this year as well, and that goes along nicely with the car's impressive safety scores. When you add in the Optima's very generous warranty, it becomes clear that this Kia represents a compelling value proposition.

Still, the Optima might not be the best choice for some buyers. Hybrid buyers will be hard-pressed to ignore the phenomenal mileage estimates from competitors like the 2014 Honda Accord Hybrid and 2014 Ford Fusion Hybrid that best the Optima Hybrid's numbers by up to 10 mpg. If you're looking for a standard gas-powered family sedan and you also want the roomiest cabin, the Kia Optima falls short of choices such as the Volkswagen Passat. Nor does the Optima have the lock on style and substance these days. The Hyundai Sonata (the Optima's mechanical twin), 2014 Mazda 6 and 2014 Nissan Altima are all very impressive from just about every facet. Nonetheless, the Optima's many strengths make it a solid pick, particularly if you're looking for family transportation that blends value with va-va-voom.

The Optima Hybrid LX is equipped similarly to the regular LX, but comes standard with automatic dual-zone climate control. The Convenience package items are also optional for the hybrid LX.

The Optima Hybrid EX has all the Premium package items as standard along with auto-leveling xenon headlights. Also standard is the navigation system, but it deletes the Uvo interface. Since navigation and a touchscreen are already standard on the Hybrid EX, the Technology package adds the panoramic sunroof, blind-spot monitor, rear cross-traffic alert and rear parking sensors. A White Interior package adds upgraded leather upholstery along with upgraded interior trim. The panoramic sunroof is also available as a stand-alone option.

Finally, at the top of the lineup there's the Limited, which gets all of the standard and optional equipment from the SX plus unique 18-inch wheels, unique interior and exterior trim, LED foglights, an electronic parking brake and premium leather upholstery.

Every 2014 Kia Optima is front-wheel drive. The gas-powered LX, EX and SX come standard with a 2.4-liter four-cylinder engine that produces 192 horsepower and 181 pound-feet of torque. A 2.0-liter turbocharged four-cylinder engine that produces 274 hp and 269 lb-ft of torque is optional on the SX and standard on the Limited. All models come with a six-speed automatic transmission.

Powering the 2014 Kia Optima Hybrid is a 2.4-liter four-cylinder gasoline engine paired with an electric motor and a six-speed automatic transmission. Combined power output is 199 hp and 235 lb-ft of torque. The Optima Hybrid EX gets an EPA-estimated 37 mpg combined (35 mpg city/39 mpg highway), while the LX model rates 38 mpg combined (36 mpg city/40 mpg highway). During Edmunds testing, a Kia Optima Hybrid went from zero to 60 mph in 8.7 seconds, which is a little below average for the segment.

In Edmunds brake testing, an Optima EX came to a stop from 60 mph in 121 feet, a distance that's a couple of feet shorter than the segment average. The turbocharged SX made this stop in 129 feet, a few feet longer than average but still acceptable for this class.

In government crash tests, the Optima earned a top five-star rating for overall safety performance, with five stars awarded for overall frontal- and side-impact tests. The Insurance Institute for Highway Safety gave the Optima a top score of "Good" in its moderate-overlap frontal-offset, side-impact and roof strength tests. The Optima earned an "Acceptable" rating (second highest) in the small-overlap frontal-offset crash test and a "Good" rating for its head restraints/seat whiplash protection in rear impacts.

First impressions of the 2014 Kia Optima's interior are usually favorable. There's a distinct European and modern look to the design, and overall interior quality is helped by an abundance of soft-touch materials. These impressions are further bolstered in the Limited trim level by the high level of standard equipment and premium leather upholstery.

Kia's Uvo (pronounced "yoo-voh") electronics interface system is similar to Ford's Sync system (both are powered by Microsoft). Uvo provides voice control of cell phones and MP3 players as well as other services, such as POIs and turn-by-turn navigation. In our testing of Uvo, we've found that it works quite well. The touchscreen interface in navigation-equipped Optimas is easy to use for navigation purposes and operating the stereo.

The Optima has a fairly spacious cabin, with comfortable seats and a useful amount of legroom front and rear. Headroom (particularly in back) is a bit tight due to the car's rakish, coupelike roof line. Taller consumers should definitely think twice about getting the optional panoramic sunroof, as it further decreases headroom. The Optima's 15.4 cubic feet of trunk space is about average for its class, but the Optima Hybrid's trunk offers considerably less space -- 10.8 cubic feet -- due to intrusion from the hybrid battery pack.

The 2014 Kia Optima rides comfortably without isolating you from the environment, although the car's numb steering (with its artificially high effort) is less praise-worthy. The overall driving experience is certainly pleasant and better than average for the segment. SX and Limited models come with a sport suspension that contributes to slightly sportier handling, though some may find ride quality in these models a little too firm.

The high horsepower ratings on both engines are tempered somewhat by the fact that acceleration times are relatively average. We've also found that the turbocharged engine is particularly sensitive to hot weather, and acceleration is noticeably slower in such conditions. But in general driving, the Optima feels suitably powered, and the transmission is responsive and shifts smoothly.

Most drivers will find the 2014 Kia Optima Hybrid's performance more than adequate as well. You'll scarcely notice the transitions between gas and electric power in traffic, and there's plenty of power for passing maneuvers. The biggest thing you'll have to get used to in the Optima Hybrid is the odd braking response: Due to the blending of the car's conventional brakes with the hybrid regenerative braking system, there's a small but noticeable delay between pressing the brake pedal and actually getting the desired braking force. There's plenty of braking power for repeated, hard stops but it's a peculiarity you'll have to live with.