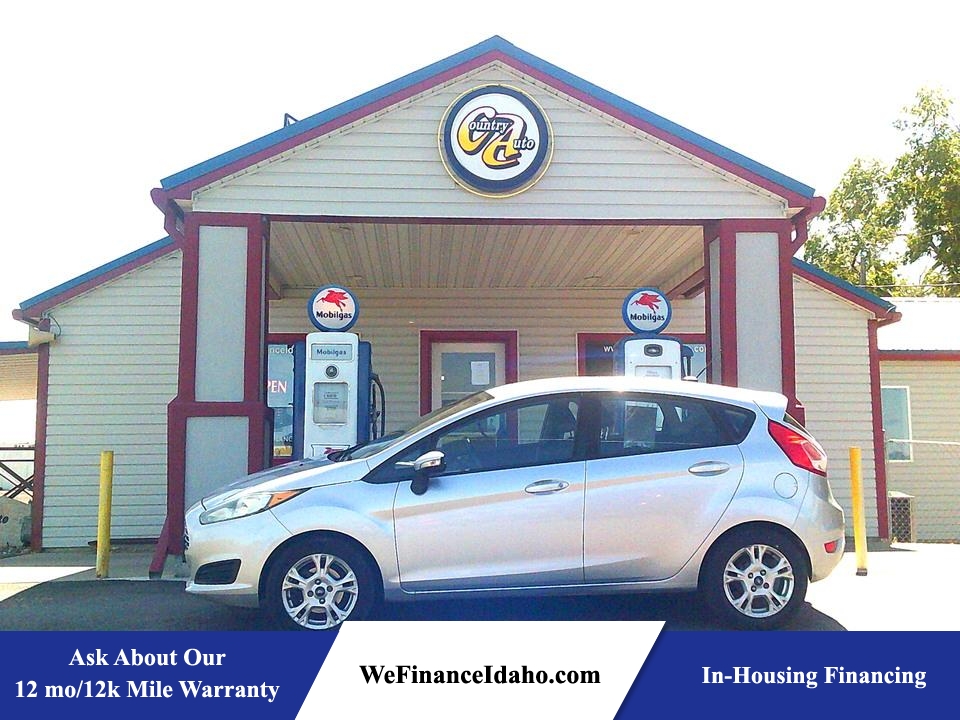 The 2014 Ford Fiesta is a fun-to-drive small car, with a nicely trimmed cabin, excellent build quality and plenty of connectivity features. If you're looking for an economy sedan or hatchback that feels like a more expensive car than it really is, the Fiesta deserves serious consideration.

For 2014, the Ford Fiesta receives a new Fiesta ST trim level that features a more powerful engine and sportier handling. For other Fiestas, there's an efficiency-oriented turbocharged three-cylinder engine as an option. Other changes for 2014 include updated exterior styling, additional standard features and the availability of the MyFord Touch electronics interface.

Since Ford reintroduced the Fiesta subcompact to the U.S. market in 2011, we have been big fans. Tiny but feisty, the Fiesta has an overall goodness that's disproportionate to its size, with a vast talent set that includes slick styling (freshened for 2014), snappy handling and a high level of refinement inside.

Both sedan and hatchback models receive mild face-lifts for 2014, and even base models boast an impressive number of standard features, including Bluetooth, an iPod interface and seven airbags. Bigger spenders can order Fiestas equipped with heated front seats, leather upholstery, a keyless ignition and the MyFord Touch touchscreen control interface (with or without a navigation system).

Responsive steering and sharp handling make the standard 2014 Ford Fiesta fun to drive. With the base engine, the Fiesta likely won't set anyone's heart ablaze when accelerating from a stoplight, especially with the sometimes-hesitant automatic transmission. Those looking for maximum fuel mileage should know about the newly available EcoBoost turbocharged three-cylinder engine that earns an impressive EPA estimated 36 mpg for combined city and highway driving. A Fiesta equipped with the EcoBoost engine was recently given an "A" Rating by the Edmunds.com staff. We found it to be a "terrific city vehicle with an interior that offers competitive quality."

The most exciting change for the Fiesta for 2014, however, is the arrival of the new Fiesta ST model. The ST features a turbocharged four-cylinder engine making 197 horsepower, a six-speed manual transmission, 17-inch wheels, sportier steering, performance-tuned suspension, upgraded brakes and sport seats (with real Recaro seats available as an option). Enthusiast buyers on a budget will certainly want to check out the Fiesta ST before plunking down their money on the Fiat 500 Abarth or Mini Cooper S.

With the additional content, freshened styling and newly available powertrain options for 2014, the Ford Fiesta appears poised to retain its popularity even in the face of formidable class competition, which includes the 2014 Chevrolet Sonic, 2014 Hyundai Accent and 2014 Kia Rio.

The Fiesta Titanium effectively comes with the contents of the SE Appearance and Comfort packages as standard, but wears a different set of 16-inch wheels, plus chrome exterior trim and a black grille. It also has a rearview camera, rear parking sensors, keyless ignition/entry, leather upholstery, upgraded Sony speakers, HD radio and an auto-dimming rearview mirror.

A sunroof and a navigation system are stand-alone options on SE, Titanium and ST models. Additional extras on the ST model include a unique Molten Orange paint color, cloth/leather-trimmed Recaro seats and gray-painted 17-inch wheels with red brake calipers.

The base engine for the 2014 Ford Fiesta is a 1.6-liter four-cylinder that produces 120 hp and 112 pound-feet of torque. A five-speed manual transmission is standard, but a six-speed automated manual known as "PowerShift" is optional. This type of "automatic" transmission still shifts for you, but it does a better job of maximizing engine power and efficiency than a traditional automatic.

In Edmunds performance testing, a manual-equipped Fiesta with the 1.6-liter engine went from zero to 60 mph in 9.4 seconds, which is an average time for the class. The PowerShift-equipped model did the same sprint in 10.6 seconds, which is average among entries equipped with automatic transmissions.

Newly available for the 2014 Fiesta SE is a turbocharged (EcoBoost) 1.0-liter three-cylinder engine, which is good for 123 hp and 125 lb-ft of torque. Mated only to a five-speed manual transmission initially, this engine puts up strong fuel economy numbers to the tune of 36 mpg combined (31 mpg city/43 mpg highway) along with fairly peppy performance. In Edmunds performance testing, a Fiesta equipped with the 1.0-liter turbocharged engine and the SFE package went from zero to 60 mph in 8.9 seconds, a quick time for the class.

The 2014 Ford Fiesta ST's turbocharged 1.6-liter four-cylinder pumps out 197 hp and an impressive 214 lb-ft of torque. A six-speed manual is the only transmission offered. At Edmunds' test track the Fiesta ST sprinted to 60 mph in 7.1 seconds, making it easily one of the quickest cars in its class. EPA estimates for the ST stand at 29 mpg combined (26 mpg city/35 mpg highway).

In Edmunds brake testing, a Fiesta SE with 15-inch wheels came to a stop from 60 mph in 136 feet, which is one of the longest distances in the segment. On the other hand, a Fiesta SES with 16-inch wheels stopped in 119 feet while the Fiesta ST stopped in just 112 feet. Those are two of the shortest distances we've seen for this segment.

In government crash testing, the Fiesta received four out of five stars for combined overall protection, with four stars for frontal protection. However, the 2014 Fiesta received only two out of five stars for side-crash protection -- with four stars for front passengers and two stars for the rear seat due to excessive intrusion into the rear cabin. The Insurance Institute for Highway Safety gave the Fiesta the highest possible rating of "Good" in the moderate-overlap frontal-offset, side-impact and roof-strength tests. In that agency's small-overlap frontal offset test (conducted on Fiestas built after August 2013), the Fiesta scored a second-lowest "Marginal" rating. The Fiesta's seat/head restraint design was rated "Good" for whiplash protection in rear impacts.

With its edgy style, soft-touch dash top, metallic accents and tight build quality, the Fiesta's cabin has a premium vibe that's unexpected in an economy car. Ford has upgraded some of the materials for 2014, and models with the MyFord Touch interface and new 6.5-inch touchscreen surrounded by piano-black trim look particularly upscale, although said black trim is overly smudge-prone. Ambient lighting in SE, Titanium and ST models gives the place a classy look at night, too.

The standard Sync system allows voice control over the audio system and your cell phone, and it also provides such features as voice-prompted turn-by-turn navigation (it works respectably well) and emergency assist. Another high-end feature not often seen in this segment is the available keyless entry/ignition system.

In the ST, the optional Recaro sport seats with their large side bolsters wrap around and hug both front occupants. As such, they hold you securely in place while you're hustling the ST along a curvy road. But those aggressive bolsters make getting in and out of the car a little harder, and larger folks may find the seats uncomfortable on long trips.

At 12.8 cubic feet, the sedan's trunk capacity is class-competitive. The Fiesta hatchback offers a bit less than that with its rear seat up. Unfortunately, the seats don't fold completely flat, and the Fiesta's 26 cubic feet of maximum cargo capacity is small even for this class of car.

The 2014 Ford Fiesta is one of the most rewarding cars to drive in its class. In the real world of stop-and-go traffic and freeway merging, the Fiesta's base 1.6-liter engine delivers ample punch down low and remains buttery-smooth even when taken to redline. The optional 1.0-liter turbocharged three-cylinder is also a great choice, as it's even stronger and more fuel-efficient. The ST's turbocharged engine takes those traits to a higher level, as it always feels ready to charge thanks to its impressively broad, muscular powerband.

If you like manual transmissions, the standard five-speed is an excellent example of the breed. There are wide intervals between shifts and we wish there was an available six-speed manual, but the five-speed boasts a linear clutch take-up and light throws. To get any useful power with the 1.0-liter EcoBoost engine, you'll have to rev the car pretty high, but in most daily driving situations it works just fine. The available six-speed automated manual transmission takes the place of a conventional automatic in the Fiesta. It definitely feels different at first, as it occasionally allows the car to roll back on hills and can make the Fiesta reluctant to creep forward when parking. Ford has been refining the transmission's behavior since the Fiesta's introduction, though, and most people get used to it.

There's nothing odd with the way the Fiesta drives down the road, however. Thanks to responsive steering and sophisticated suspension tuning, the Fiesta feels at once substantial and lithe. The car handles with rewarding precision, but ride quality is a bit firmer in the Fiesta than it is in some rivals. The 2014 Ford Fiesta ST is even more impressive. It's as lively and precise as the larger Focus ST when driving around corners, and ride quality, although firm, is not punishing.