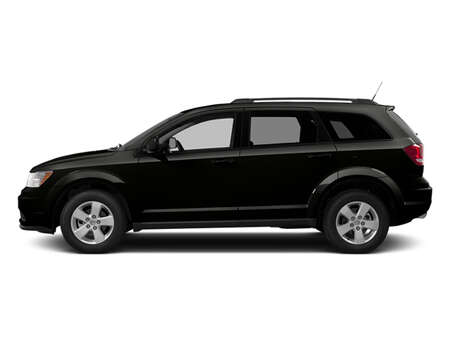 An available V6 engine and a third-row seat make the 2014 Dodge Journey a decent pick for families on a budget, but overall it falls short of newer crossovers with more powerful four-cylinder engines and better fuel mileage ratings.

The 2014 Dodge Journey is a roomy, versatile crossover SUV that straddles the divide between compact and midsize utility vehicles. It's one of the few remaining crossovers in its price range that offers both an available V6 engine and a third-row seat. In addition, its interior is pleasant, well-trimmed and comfortable. However, in a segment full of strong competitors, the Journey comes up short in a couple of critical areas.

A lackluster four-cylinder engine is by far the weakest link on the 2014 Dodge Journey. Not only is acceleration sluggish on this version but fuel economy is well below average, mainly due to Dodge's continued use of an outdated four-speed automatic transmission. If you're going to buy a Dodge Journey, it's worth springing for the optional 3.6-liter V6 -- something you'll have to do anyway if you want all-wheel drive, which isn't offered with the four-cylinder. The six-cylinder is potent and smooth, and paired with a more modern six-speed automatic transmission. Of course, equipping your Journey with the V6 also raises the price by several thousand dollars.

If you can get past those issues, the 2014 Dodge Journey can be more useful for families than some other compact SUVs. It has an optional third row of seating appropriately sized for two small children, and you can get built-in booster seats in the second row. There are useful storage areas, too. You can store snacks and cold drinks in bins built into the floor of the second-row seating area, and a compartment under the front passenger seat is handy for stashing valuables.

These conveniences are certainly nice to have, but consumers have plenty of choices for a compact or midsize utility vehicle. The popular 2014 Honda CR-V is one of our favorites and an excellent pick if you want a small crossover with a refined, fuel-efficient four-cylinder engine and don't need a third row of seating. Rivals like the Mazda CX-5 and Ford Escape feel sportier from behind the wheel and also offer superior fuel economy.

Among the seven-passenger vehicles in this price range, the newer 2014 Hyundai Santa Fe and 2014 Kia Sorento stand out for their smooth V6 engines, superior mpg ratings and slightly larger interiors. Base versions of the Kia are comparable in price to the Journey, but higher-line versions of the Sorento and Santa Fe cost significantly more. If you're on a tight budget but still need three rows of seating, the Mazda 5 minivan is a good alternative to the four-cylinder Journey.

Based on the strength of the competition, the 2014 Dodge Journey is not among our top picks for a seven-passenger crossover. However, if you run across a good deal on a V6 model, it's still worth a test-drive.

The R/T includes all the Limited features (minus the roof rails) and adds a monochrome exterior treatment, special 19-inch wheels, a sport-tuned suspension, black perforated-leather upholstery with red stitching and a premium audio system.

Many of the features on the Limited and R/T are available on the lower trims via option packages. Other available features (depending on trim) include the Blacktop package (gloss black 19-inch wheels, grille and exterior trim), a sunroof, rear parking sensors, a rearview camera, a folding and reclining third-row seat, three-zone automatic climate control (with rear air-conditioning), integrated second-row child booster seats, a rear-seat entertainment system, a navigation system (paired with the 8.4-inch touchscreen) and Wi-Fi connectivity.

The 2014 Dodge Journey AVP, SE and SXT are powered by a 2.4-liter four-cylinder engine that produces 173 horsepower and 166 pound-feet of torque. A four-speed automatic transmission is standard, and you can only get front-wheel drive with this engine. Fuel economy ratings are 21 mpg combined (19 city/26 highway) – well below average for a four-cylinder crossover.

Optional on the SXT and standard on the Limited and R/T is a 3.6-liter V6. It's good for 283 hp and 260 lb-ft and is matched to a six-speed automatic. Front-wheel drive is standard and all-wheel drive is optional. We recorded a 7.8-second 0-60-mph time in a front-drive, V6-equipped Journey, which is about average for a V6 crossover in this price range. Fuel economy stands at 19 mpg combined (17 mpg city/25 mpg highway) with front-wheel drive and 19 mpg combined (16/24) with all-wheel drive; both are below average for a V6-powered crossover in this price range.

Every 2014 Dodge Journey comes standard with antilock disc brakes, traction and stability control, active front head restraints, front side airbags, side curtain airbags and a driver knee airbag. Integrated second-row child booster seats and rear parking sensors are optional on every Journey. A rearview camera is available as an option on the SXT, Limited and R/T.

In Edmunds brake testing, a Journey V6 FWD came to a stop from 60 mph in 124 feet, an average performance for this class.

Inside, the Dodge Journey's materials are high in quality, the design is clean and modern and the available technology is pretty easy to use. We especially like the 8.4-inch touchscreen interface offered in all models except the SE. It's intuitive to use and is available with or without navigation.

Other strengths for the Journey include clever storage bins built into the floor, and options such as a fold-flat front passenger seat and integrated child booster seats for the second row that make life easier for families. Also helping that cause is the Journey's available third-row seat, which is bundled with a separate rear air-conditioner. This seat is far from adult-friendly, but if you need to take a couple extra kids to a T-ball game, it's handy.

The Dodge offers a total cargo capacity of 67.6 cubic feet with all its rear seats folded. That's a few cubes smaller than competitors likes the Sorento and CR-V, but more space than the Chevy Equinox.

The 2014 Dodge Journey has different personalities depending on which engine you choose. The four-cylinder engine is noisy and really doesn't have enough power to get this heavy crossover moving. The outdated four-speed automatic transmission that comes with this engine does the Journey no favors in the fuel economy department, either.

Accordingly, we'd avoid the four-cylinder entirely and step up to the 3.6-liter V6, which feels potent in any situation. Unfortunately, fuel economy is still below average, and the six-speed automatic transmission can be slow to respond when a downshift is needed.

Around town, the Journey provides a smooth ride. However, the steering is on the slow side, and you might find yourself having to make more hand movements than you would otherwise prefer. When driven harder through turns, the Journey's body leans noticeably. Overall, the Journey just doesn't present much in the way of confidence-inspiring handling.