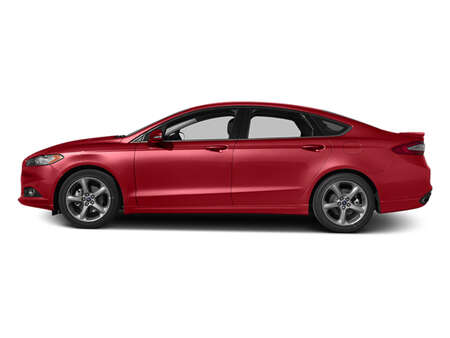 With solid power, excellent fuel economy, provocative styling and enhanced refinement, the 2013 Ford Fusion is a top choice for a midsize sedan.

The 2013 Ford Fusion is fully redesigned. Highlights include more dramatic styling, improved fuel economy and the addition of the MyFord Touch electronics interface.

For the SE and Titanium, Ford offers the Luxury Driver Assist package, which includes automatic high-beam control, a 110-volt power outlet, blind-spot monitoring, rear cross-traffic alert and lane departure warning and lane assist. Remote ignition is standard on the Titanium and optional on the SE.

A sunroof is optional for both the SE and Titanium. The rear parking sensors are optional for the SE, while the Titanium can be had with 19-inch wheels. With the Technology package selected, the Fusion SE and Titanium can also be ordered with a navigation system, an automated parallel parking system and adaptive cruise control with collision warning and brake intervention.

The Fusion S and SE come standard with a 2.5-liter four-cylinder engine that's rated at 175 hp and 175 pound-feet of torque. Power is sent to the front wheels through a six-speed automatic transmission.

For the SE, Ford also offers two additional engine options. The first is a turbocharged 1.6-liter four-cylinder that produces 178 hp and 184 lb-ft of torque. The second engine available is a turbocharged 2.0-liter four-cylinder generating 240 hp and 270 lb-ft of torque. The six-speed automatic is again standard, though the 1.6-liter can also be had with a six-speed manual transmission. The Fusion Titanium comes standard with the turbocharged 2.0-liter engine and automatic. All-wheel drive is optional for the Titanium as well.

Official EPA-estimated fuel economy stands at 22 mpg city/34 mpg highway and 26 mpg combined with the 2.5-liter engine. The 1.6-liter engine, which offers automatic engine stop-start functionality (like a hybrid), earns 23/36/28 mpg. Opting for the manual transmission improves fuel economy to 25/37/29. The front-wheel-drive 2.0-liter-equipped Fusions earn 22/33/26, while the AWD Titanium will lower by 1 mpg both highway and combined ratings.

In Edmunds brake testing, a Fusion Titanium stopped from 60 mph in 123 feet, an average distance for this class of car.

The Insurance Institute for Highway Safety gave the Fusion the highest possible rating of "Good" in its frontal-offset, side and roof strength crash tests.

Inside the cabin, a stylish interior with high-quality materials shows Ford's continuing dedication to improving the passenger environment. The dashboard and center stack are uncluttered and tastefully designed, although this look can also come across as a bit stark and uninviting, especially with the all-black interior.

With the highly adjustable power driver seat, just about everybody should be able to find a comfortable driving position. The passenger seat is just as supportive, while the split-folding rear seats are well contoured and have plenty of legroom. One might think that the Fusion's swoopy styling would cut down on rear headroom, but headroom is comparable to its competition, with enough clearance for normal-size adults. Even outward visibility to the front has been improved thanks to the new Fusion's relatively slender front roof pillars.

The MyFord Touch system is new to the Fusion this year. As is the case on other Fords, this interface consists of a main display, supporting gauge cluster displays and the ability to input commands for various audio, phone and navigation functions via voice (Sync), touch controls or buttons on the steering wheel. It's a smart idea in theory, and it does provide some nice customization possibilities. Unfortunately, there's a learning curve involved for the user, and even with Ford's recent updates, we've found the system is prone to glitches, somewhat slow to respond and has icons that are difficult to locate and press while on the move.

Trunk space stands at 16 cubic feet, which is slightly above average for this class.

Within the crowded segment of domestic midsize sedans, we had always complimented the Fusion for the most European-flavored driving experience. The 2013 Ford Fusion raises the bar even higher, combining a comfortable and controlled ride with engaging handling.

Electric-assist power steering now comes standard on all Fusion models. While we've typically found these systems notably lacking in feel, the Fusion's example proves remarkably communicative, and it's one of the better versions of this new industry-wide trend. This sedan is confident and composed when cornering, and very much at the top of its class. The Fusion is also remarkably quiet on the highway.

It's impossible to go wrong with any of the Fusion's three engine choices (not to mention the hybrid models). Even the base engine presents competitive power, while the two turbocharged engines both provide an appealing blend of fuel efficiency and ample torque. The 1.6-liter is the best bet for most buyers and feels quicker than our acceleration testing numbers would indicate.