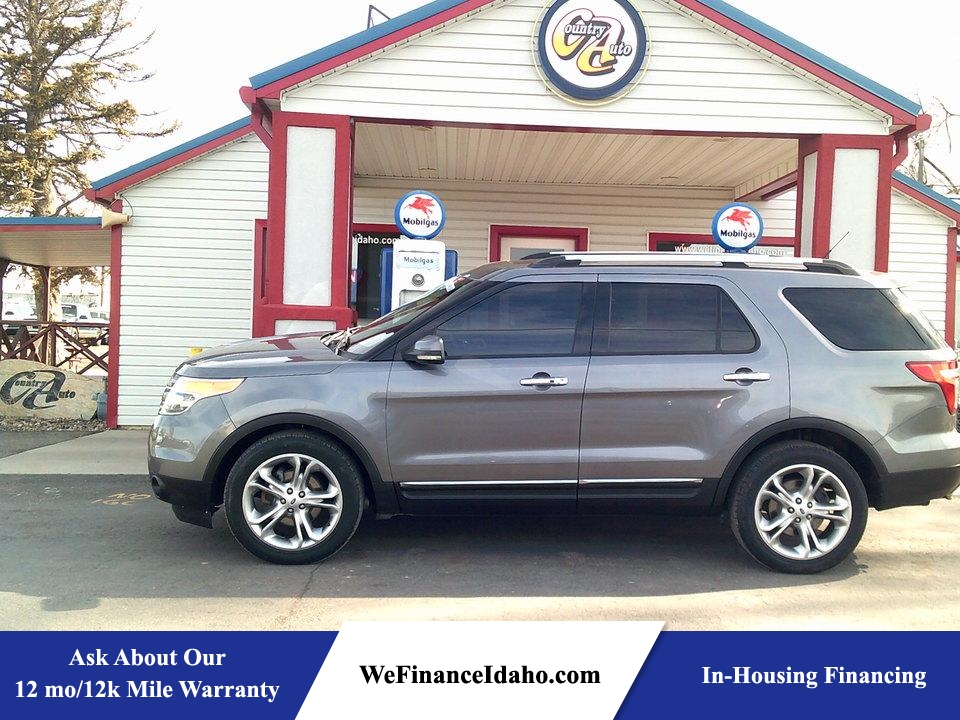 With solid on-road dynamics, decent fuel efficiency and an accommodating, high-class cabin, the 2013 Ford Explorer is a top pick for a large crossover SUV.

One could argue that the Ford Explorer started America's love affair with the SUV, and as times have changed, so has the Explorer. Thanks to a full redesign two years ago, the 2013 Ford Explorer is the most efficient and upscale Explorer yet. It's also become one of the most technologically advanced large crossover SUVs available, with dynamic qualities and a hushed cabin that would rival those of many luxury-brand models.

In the last redesign, Ford changed the Explorer's underlying architecture, going from the previous truck-based chassis to a unibody design for more usable interior space. This design brings with it a weight reduction, which results in better fuel efficiency and handling. Inside the cabin, the Explorer offers a stylish, well-finished space for up to seven passengers. There are a lot of advanced features, too, including the voice-activated Sync system, the touchscreen-based MyFord Touch and many safety features, including second-row seatbelt airbags, adaptive cruise control with collision warning and, for 2013, lane-departure warning and lane-keeping assist.

For power, the Explorer comes standard with a 290-horsepower V6. It's what most buyers go with, but Ford also offers a turbocharged EcoBoost four-cylinder engine as an option. Oddly, you have to pay more to get the four-cylinder, but it gives the Explorer best-in-class fuel economy and pays for itself in a few years thanks to reduced gas bills. Also, the Explorer's available Terrain Management, a selectable four-mode all-wheel-drive system, takes some of the guesswork out of properly operating a four-wheel-drive system.

If neither of the above engines suits you, there's also the turbocharged V6 that comes with the new Sport trim level this year. It's the same turbo 3.5-liter V6 Ford uses in the Flex and generates an estimated 365 hp. The Sport also comes with firmer suspension tuning, revised steering for a claimed improvement in road feel, different 20-inch wheels and special interior and exterior trim details.

While there's a lot to like about the 2013 Ford Explorer, we do have some reservations. The third-row seat, for instance, isn't as roomy as that of some competitors. And while the available MyFord Touch interface is a neat idea in theory, we've found it slow to respond and difficult to use. That leaves the door open for some other top choices, including the roomier Chevrolet Traverse, the more powerful Dodge Durango and the sportier Mazda CX-9. They're all quite desirable, but if upscale features and a high-quality interior are priorities for you, the Explorer is a great choice.

The 2013 Ford Explorer is a large crossover SUV available in base, XLT, Limited and Sport trim levels.

The Limited bundles the XLT's items with 20-inch wheels, keyless ignition/entry, remote engine start, power-adjustable pedals with memory, a 110-volt power outlet and a 12-speaker Sony sound system with HD radio. Optional for the Limited is the 301A package that includes a power liftgate, a power-folding operation for the third-row seat, an eight-way power passenger seat, ventilated front seats, a heated and power tilt-and-telescoping steering wheel and a navigation system. To this the 302A package adds xenon headlamps, automatic high beams, an automatic parallel-parking system, adaptive cruise control with collision warning and brake support, lane-departure and lane-keeping assist, a blind-spot warning system and inflatable seatbelts for second-row outboard passengers.

Some of the features in the XLT and Limited's optional packages can be added as individual options. Other stand-alone options include a dual-panel sunroof, second-row captain's chairs and a rear-seat entertainment system with dual headrest-mounted displays.

The 2013 Ford Explorer comes standard with a 3.5-liter V6 that produces 290 hp and 255 pound-feet of torque. A six-speed automatic transmission and front-wheel drive are standard. Four-wheel drive (there is no low-range gearing) is optional and includes Ford's Terrain Management System, a selectable four-mode system that optimizes traction electronically for different conditions. Hill descent control and hill start assist are also included.

In Edmunds testing, a 4WD Explorer with the base V6 accelerated from zero to 60 mph in 8.3 seconds, an average time for the class. A front-drive V6 Explorer returns an EPA-estimated 18 mpg city/25 mpg highway and 20 mpg combined -- also average for the class. Four-wheel drive lowers this to a still respectable 17/23/19. Properly equipped, a V6 Explorer (base or turbocharged) can tow 5,000 pounds.

The Explorer Sport comes with a turbocharged 3.5-liter V6 engine as well as four-wheel drive. It's rated at 365 hp and 360 lb-ft of torque. EPA-estimated fuel economy stands at 16 mpg city and 22 mpg highway.

Optional on all front-wheel-drive trims is the turbocharged 2.0-liter "EcoBoost" four-cylinder engine -- also paired with the six-speed auto -- making 240 hp and 270 lb-ft of torque. In Edmunds testing, an EcoBoost Explorer went from zero to 60 mph in 9.1 seconds, which is on the slow side for the class. Fuel economy, however, is best-in-class at 20/28/23.

Every 2013 Ford Explorer comes standard with stability and traction control, trailer sway control, front side airbags, side curtain airbags, a front passenger knee airbag and MyKey, which allows parents to specify limits for vehicle speed and stereo volume. The Explorer's stability control system also includes Ford's Curve Control, which can monitor speed carried into a corner and decelerate if necessary.

Optional on the XLT and above are a blind-spot warning system (includes cross-traffic alert) and inflatable seatbelts for outboard second-row passengers. The Limited and Sport can be equipped with collision warning and brake support and lane-departure warning/keeping. In Edmunds brake testing, a 4WD Explorer Limited came to a stop from 60 mph in 122 feet -- an average distance for the class. The EcoBoost model stopped in 130 feet.

The Explorer's impressive cabin features excellent build/materials quality within an attractive, upscale design. The dash feels soft to the touch, the switchgear operates with precision (or is touch-operated with the optional MyFord Touch) and the overall look is quite rich. A loaded Explorer is actually just as nice as any Lincoln.

Much of that upscale look comes from the MyFord Touch interface, which adds a high-resolution display screen (plus two additional screens for the gauge cluster) and touch-sensitive audio and climate "buttons." It's a neat interface in theory, particularly when you utilize the complementary Sync voice-activation system. But in practice, we've found that the buttons are difficult to identify at a glance, and too often get pressed accidentally or fail to respond properly, even taking into account Ford's latest software update.

The Explorer's cabin is certainly spacious, but still not quite as roomy as those of the Dodge Durango, Ford Flex and especially the GM triplets (Acadia, Enclave, Traverse). Its 80 cubic feet of maximum cargo space is the smallest of the group and the third row is a bit cramped by comparison, though it does easily accommodate children. The driving position is spot-on for most drivers, though the wide roof pillars and high dash make it seem bigger when trying to fit through tight spaces.

The 2013 Ford Explorer feels rock-solid at freeway speeds, well-damped over broken pavement and very confident when negotiating a corner. The responsive steering demonstrates Ford's skill at tuning an electric power steering system (a setup that improves fuel economy and accommodates the automatic-parking feature).

While this Ford doesn't offer a V8 option, the base V6 is quick enough and can handle the job for most recreational pursuits. We've yet to test an Explorer with the turbocharged V6, but based on our experiences with the similarly turbocharged Flex, expect swift acceleration and greater passing abilities when towing.

Don't be quick to dismiss the idea of a turbo-4 powering this none-too-small SUV. It may not be as quick as the V6, but in practice, the EcoBoost engine provides smooth response, more than adequate acceleration for daily use and, of course, better fuel mileage than you'd get with the V6.