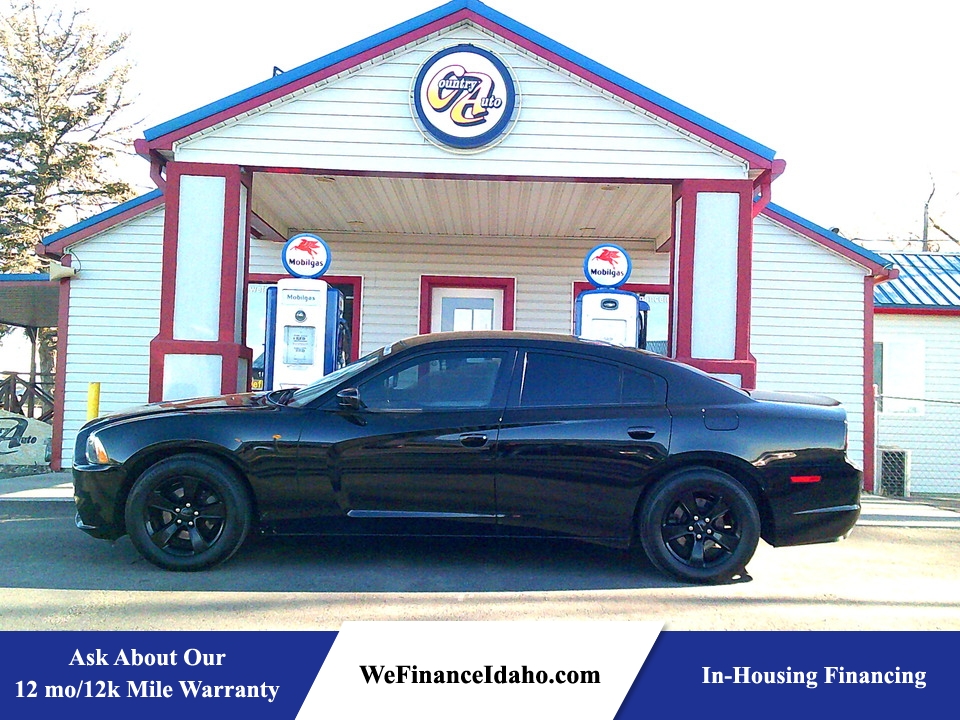 The 2013 Dodge Charger fares well enough as a large sedan. But factor in its potential performance value and the Charger has no peer.

While large sedans make a very logical choice for most shoppers, there's a case for occasionally being a bit illogical. This is especially true if you're looking at the 2013 Dodge Charger. With its bold looks and performance to match, nobody's going to say the Charger is just another sedan with a big backseat.

Almost all Dodge products emphasize performance, and the 2013 Charger is no exception. The standard V6 puts out a muscle-carlike 300 horsepower maximum, while the Charger's V8 options run 370 hp or a rollicking 470 hp. Rear-wheel drive creates an idealized handling setup just like an expensive European luxury car, while all-wheel drive is available for those who live amid inclement weather.

The Charger isn't only about performance, though. Fuel economy remains quite good with the V6, especially when paired to the advanced eight-speed automatic transmission common to most Charger configurations. And though the coupelike roof line does cut down on rear-seat headroom, the cabin is roomy, with a nicely trimmed interior that boasts a useful touchscreen interface.

In most respects, the Charger is in a class by itself. Setting aside the 2013 Chrysler 300, which largely trades performance for extra luxury, the 2013 Ford Taurus is the only other large sedan with performance credentials. Head-to-head, we greatly prefer the Charger given its superior performance and more distinct personality. While more typical large sedans are better suited to most buyers, the 2013 Dodge Charger earns its place as the choice for driving enthusiasts.

The SXT Plus package adds 18-inch wheels, leather upholstery, heated rear seats, additional power adjustment for the front seats and LED ambient illumination. The Rallye Appearance Group adds a power upgrade for the V6, 20-inch chrome-clad wheels, performance tires, a sport-tuned suspension and a 10-speaker sound system. The Blacktop package is the same but with painted wheels and a special blacked-out grille.

Starting with the SXT trim, the 2013 Dodge Charger also can be fitted with the Navigation Group, which includes a navigation system and back-up camera. Opt for the Driver Confidence Group and you'll get a blind-spot warning system with rear cross-path detection, the back-up camera, rain-sensing wipers and xenon headlights with automatic high-beam control. The same goes for the Driver Convenience Group, which contains heated and ventilated front seats, driver memory settings and power-adjustable pedals and steering wheel. A sunroof is a stand-alone option.

The R/T adds to the SXT's standard equipment a V8 engine, 18-inch wheels, performance tires, upgraded brakes, the same sport-tuned suspension as the Rallye (rear-wheel drive only), xenon headlights and front sport seats. The R/T Plus package brings the same optional equipment to the V8-powered Charger that is available for the SXT Plus, while the Charger R/T Road & Track package adds to the R/T Plus with a black grille, 20-inch alloy wheels, performance calibration for the engine and transmission, paddle shifters, ventilated front seats with driver-side memory and a power-adjustable steering column and pedals with memory.

The Super Track Pak -- available only for the Charger with the Road & Track package -- adds 20-inch wheels, a sport-tuned suspension, performance steering, upgraded brakes and a three-mode adjustable stability control system. Meanwhile, the all-out R/T Max package combines all the content of the Navigation, Plus, Driver Convenience and Driver Confidence packages as well as the content of the Adaptive Cruise Control group, which includes adaptive cruise control with forward-collision warning and a heated steering wheel. The Adaptive Cruise package also can be ordered for the Charger SXT Plus, R/T Plus and R/T Road & Track.

The SRT8 Super Bee is essentially a less luxurious, more affordable version of the SRT8. It has a smaller touchscreen interface and deletes a variety of features, including the adaptive suspension, xenon headlights and Harman Kardon stereo system. The Super Bee still has its own personality with yellow or black paint accented with Super Bee emblems and graphics, unique grille and hood treatments and special cabin features including striped cloth seats with embroidered Super Bee logos on the front headrests.

The 2013 Dodge Charger SE and SXT come standard with a 3.6-liter V6 that produces 292 hp and 260 pound-feet of torque. Add the Rallye Appearance Group or Blacktop package and engine and exhaust tweaks lift horsepower to 300 and torque to 264 lb-ft. A five-speed automatic is standard on the SE; an eight-speed automatic is optional for the SE and standard for all SXTs. Rear-wheel drive is standard, but the SXT can be equipped with all-wheel drive. The SE returns an EPA-estimated 18 mpg city/27 mpg highway and 21 mpg combined. With the eight-speed automatic, fuel economy jumps to 19/31/23 mpg. In Edmunds performance testing, a rear-drive SXT accelerated from zero to 60 mph in 7.1 seconds, an average time for a full-size sedan.

In Edmunds brake testing, a Charger SXT with the optional 20-inch wheels came to a stop from 60 mph in a very short 113 feet, about 10 feet better than average. An R/T was essentially the same, while the SRT8 managed an even shorter 108 feet.

Though the Charger is oriented toward performance and vibrant exterior styling, its interior is still nicely assembled of visibly richer materials in nearly every place your eye can see. The 8.4-inch touchscreen interface standard to all but the base Charger SE features large, well-marked virtual buttons, a concise menu structure and a navigation system that has addressed the bugs inherent in earlier versions.

Given that the Charger is a full-size car in most respects, everyone including those in the backseat will find a luxurious amount of space inside, though the car's slanting roof line restricts headroom for taller backseat passengers and limits rearward visibility. The driving position is excellent even in models without multiple adjustability options for the seat. The trunk's 15.4-cubic-foot volume is merely adequate for a large sedan, however, but 60/40-split-folding rear seatbacks are standard for occasions when you need more room.

The 300-hp 3.6-liter V6 in the base Chargers is anything but a dud, but it is particularly sweet when paired with the eight-speed automatic, which shifts crisply but smoothly, even when shifting near the husky V6's redline. You'll like the sound too, even if the 7.1-second run to 60 mph isn't that startling. The sonorous but only reasonably brisk acceleration uncovers one less-desirable aspect of the Charger's spacious footprint: with size comes weight. Just shy of 2 tons, the rear-drive 2013 Charger SXT is a formidable mass to move, even for 300 horsepower.

The alternative is the effortless shove of the Hemi 5.7-liter V8, although it's a disappointment this engine can't be linked to the more efficient and sophisticated eight-speed automatic transmission. Not that the V8 needs a lot of gears, but the multispeed automatic probably could help curb some of its thirst, particularly on the highway. Although the V8 makes for a dreamy highway cruiser, the efficiency difference runs to an 11-mpg deficit on the highway cycle. If fuel economy is a chief concern, the 2013 Charger is best fitted with the V6.

The 2013 Dodge Charger's suspension certainly gives up little to any similarly sized car. Rear-wheel drive typically makes for "cleaner," less inhibited steering and the Charger's steering is plenty useful and cooperative. Combined with a calm, composed ride that keeps the Charger's big body surprisingly well-checked, the Charger is a competent and rewarding full-size car to drive. The big-bore SRT8 is in yet another dimension, ramping up all the above to a racetrack-level performance spectrum.