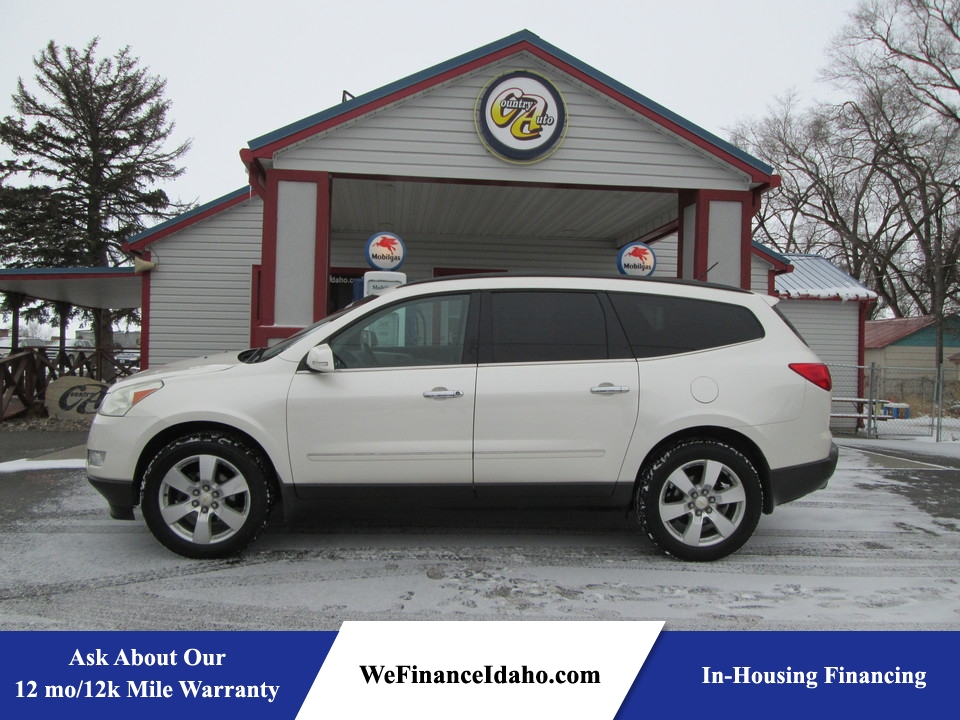 With its stylish good looks, spacious cabin, carlike ride and handling, plus decent fuel economy, the 2011 Chevrolet Traverse has much to offer SUV owners looking to downsize.

Aside from the audio system's relocated USB input and the addition of heated cloth seats to the options list for LT models, the 2011 Chevrolet Traverse remains largely unchanged.

Over the past couple of years, a lot of people have come to the realization that even though they like the practicality that a traditional SUV provides, they're not particularly fond of how unwieldy these lumbering, truck-based behemoths can be. If you're one of these people, we'd encourage you to check out the 2011 Chevrolet Traverse.

As a large crossover, the Traverse combines the people- and cargo-schlepping strengths of an SUV with the carlike ride and handling of a minivan. Granted, by choosing a crossover, you'll be giving up the heavy-duty towing capacity of those old-school sport-utes and the ultimate practicality of a minivan. Still, at the end of the day, the benefits offered by crossovers like the Traverse make them smart choices for many drivers.

While the Traverse is the least expensive of GM's three large crossovers built on the same underpinnings (the other two are the Buick Enclave and GMC Acadia), it's appealing in ways that go beyond the bottom line. Families will appreciate the roomy interior that offers comfortable seating for up to eight passengers; they'll also likely warm to the surprising number of upscale features found on the upper trim levels. Relatively decent fuel economy and high marks in government and insurance industry crash tests are also part of the deal.

The Traverse does have its faults, including less-than-optimal visibility and a third-row seat that's not quite as comfortable as the one in the 2011 Ford Flex. It's also no match for the 2011 Mazda CX-9 crossover in the handling department, nor does it offer as many advanced electronics as the new 2011 Ford Explorer. Just the same, folks in the market for a vehicle that offers the everyday usefulness of a traditional SUV or minivan without the associated downsides would do well to put the Traverse on their test-drive lists.

The Traverse LTZ ups the luxury ante with 20-inch wheels, leather upholstery, heated and ventilated power front seats (with driver memory settings), Bluetooth connectivity and remote ignition. Many of the standard features on upper trim levels can be added to the lower ones via option packages. Other highlights from the add-ons list include a trailer-towing package, a navigation system (with real-time traffic, a rearview camera and a USB port), dual sunroofs and a rear-seat DVD entertainment system (with USB port).

There is only one engine/transmission combination available for the Chevrolet Traverse -- a 3.6-liter V6 mated to a six-speed automatic with manual shift control.

In the LS and LT trims, the V6 produces 281 horsepower and 266 pound-feet of torque. In the more upmarket LTZ, output jumps to 288 hp and 270 lb-ft thanks to a dual-outlet exhaust. In our performance testing, a Traverse LT2 posted a sufficiently quick 0-60-mph time of 8.6 seconds.

Antilock disc brakes, traction and stability control, front seat side-impact airbags and side curtain airbags for all three rows are all standard on the 2011 Chevrolet Traverse, as is one year of GM's OnStar service, including turn-by-turn navigation and hands-free phone connectivity. In Edmunds brake testing, its Acadia twin came to a stop in 135 feet -- the Flex and CX-9 perform better.

In the government's new, more strenuous crash testing for 2011, the Traverse earned a top five-star rating for overall performance, with four out of five stars being given for front-impact protection and five stars for side-impact protection. The Traverse also aced the Insurance Institute for Highway Safety crash tests, where it got the highest rating of "Good" in both the frontal-offset and side-impact tests.

While the 2011 Chevrolet Traverse has a number of good qualities, its interior is the real selling point. The design is attractive, with an eye-catching two-tone color scheme, brushed aluminum and chrome trim and simple, easy-to-read gauges. There are a few low-quality plastics used in spots, and the audio and climate controls use too many small and similar-looking buttons, but overall, the Traverse's passenger cabin gets good marks for both style and function.

Depending on which trim level you choose, the interior offers seating for either seven passengers with the second-row captain's chairs or eight with the 60/40-split-folding second-row bench seat. Either way, first- and second-row passengers enjoy comfortable accommodations. The third row is much more adult-friendly than the ones you'll find in most traditional SUVs, though the Ford Flex still bests the Chevy in this regard.

While the 2011 Chevrolet Traverse rides more smoothly and handles better than most traditional SUVs, it won't exactly make you forget you're driving a plus-size vehicle.

Buyers looking at the top-of-the-line LTZ version should also bear in mind that its larger 20-inch wheels have a somewhat adverse effect on ride quality. The 3.6-liter V6 under the hood delivers wiling performance in a wide range of driving situations.