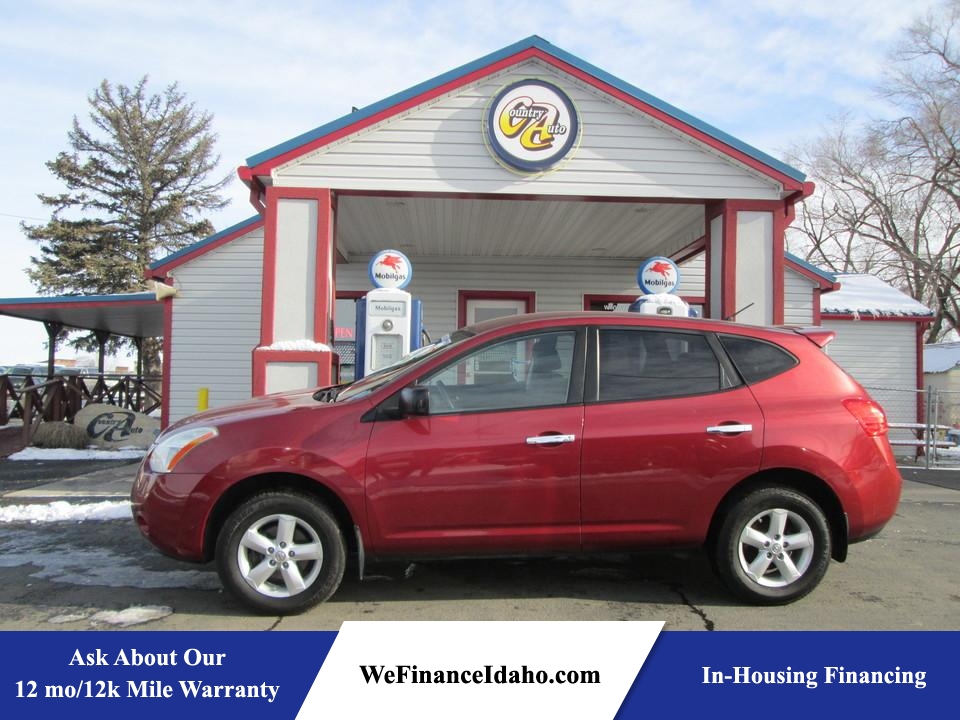 The 2010 Nissan Rogue is a comfortable, fun-to-drive compact crossover with an unusually nice interior. It's a strong contender unless you require maximum cargo space and rear-seat functionality.

The 2010 Nissan Rogue S model receives a new Value package that adds exterior styling enhancements and a back-up camera with a rearview-mirror-mounted display. The new Krom Edition adds a variety of styling elements that significantly alter the Rogue's appearance.

As an old religious saying goes, it's the fruits of the tree that matter, not the roots. That's a good approach to take when evaluating the 2010 Nissan Rogue compact crossover SUV. See, the Rogue is based on the plebeian Sentra, an also-ran in the compact sedan sweepstakes. But the way the Rogue looks and drives is more akin to its upscale crossover cousin, the sleek and sophisticated Murano. Those seeking the ultimate in compact crossover practicality should look elsewhere, but if you're willing to make some compromises in the name of style and driving pleasure, the Rogue is an intriguing proposition.

Compared to other compact crossovers, the Rogue stands out thanks to its carlike road manners, stylish skin and finely crafted interior. The steering is conveniently light in parking lots yet reassuringly weighty at speed, and the suspension takes bumps in stride while also reining in excess body roll through corners. The Rogue's slick exterior design is more European than Japanese, perhaps due to the influence of the Nissan-Renault alliance. Unlike most rivals, the Rogue boasts high-quality soft-touch dashboard materials, and the overall look is more upscale than we're used to seeing in this segment. Add it all up, and what you've got is a compact crossover with uncommon panache.

The Rogue's weak points are few but notable. Its four-cylinder engine produces enough oomph to keep up with the similarly conceived Honda CR-V, but the Rogue's mandatory continuously variable transmission (CVT) causes the engine to drone under hard acceleration. There's also no optional V6, leaving the Rogue and CR-V as the only two leading compact crossovers without one. Inside, the Rogue's rear seat doesn't slide or recline like those of some rivals, and rear visibility is a casualty of the upswept sheet metal around the rear windows.

Nonetheless, the 2010 Nissan Rogue still deserves a seat at the table with the perennial segment leaders, the Honda CR-V and Toyota RAV4. They have more cargo room and versatility, but the Rogue has a nicer interior, appealing driving dynamics and eye-catching styling. Another model to consider is the Mazda CX-7, which offers comparable style and athleticism along with an optional turbocharged engine. But in any case, after a taste of the Rogue's fruits, you're bound to forget about its humble roots.

The 2010 Nissan Rogue is a five-passenger compact crossover SUV available in S, S Krom Edition or SL trim. The base S comes standard with 16-inch steel wheels, cruise control, a tilt (but non-telescoping) steering wheel, air-conditioning, full power accessories, keyless entry and a four-speaker audio system with a CD player and an auxiliary jack. The S is also eligible for a Value package that includes 16-inch alloys, a rear spoiler, a chrome grille, tinted windows, a back-up camera with a rearview-mirror-mounted display and an auto-dimming rearview mirror.

The SL trim level starts with the S model's standard equipment and adds 17-inch alloy wheels, roof rails, tinted windows, a fold-down front passenger seat, a dual-level tray for the center console and a trip computer. Option packages for the SL include the Premium package, which bundles together foglights, a foldable cargo organizer, a cargo cover, keyless ignition/entry, Bluetooth and a seven-speaker Bose audio system with a six-CD/MP3 changer, satellite radio and steering-wheel-mounted audio controls. All-wheel-drive SL models equipped with this package also receive xenon headlights and manual shift control for the transmission. The SL's Leather package includes the expected leather upholstery plus heated front seats, a leather-wrapped steering wheel and shift knob, heated side mirrors, a six-way power driver seat, a one-touch up/down driver window and an auto-dimming rearview mirror. A sunroof is available as a stand-alone option.

The 2010 Nissan Rogue is available with either front- or all-wheel drive. It's powered by a 2.5-liter four-cylinder engine that produces 170 horsepower and 175 pound-feet of torque and employs a CVT. In our testing, an AWD Rogue SL took 9.2 seconds to reach 60 mph, which is competitive with other four-cylinder compact crossovers.

Likewise, fuel economy is similar to that of the competition. The front-wheel-drive Rogue has an EPA estimate of 22 mpg city/27 mpg highway and 24 mpg in combined driving. The AWD variant drops slightly to 21/26/23 mpg.

The 2010 Nissan Rogue boasts one of the nicest interiors of any compact crossover at its price point. The seats are comfortable front and rear, the controls are intuitive and the materials are top-notch, particularly the soft-touch dashboard covering, a rarity in this segment. Storage compartments are in relatively short supply, but the Rogue makes up for it with a substantial center console bin, a massive glovebox and a clever under-floor organizer.

Unlike the rear seats of competing crossovers, however, the Rogue's don't recline or slide fore and aft. There is also no rear center armrest. With the rear seatbacks upright, storage is limited to 28.9 cubic feet, an average figure for this class. With the seatbacks folded, cargo space jumps to 57.9 cubes, but that's significantly less than the competition offers.

Small crossovers are supposed to drive like cars, and the 2010 Nissan Rogue does them one better -- it drives like a car with great handling. Road bumps and imperfections are gobbled up with ease, highway stability is exemplary and handling is aided by good body control and precise, well-weighted steering. Power from the four-cylinder is adequate; it's the CVT that can be problematic, due to the constant engine drone it produces at full throttle. The SL trim's manual shift mode rectifies this situation somewhat by allowing the driver to cycle among six simulated gear ratios.