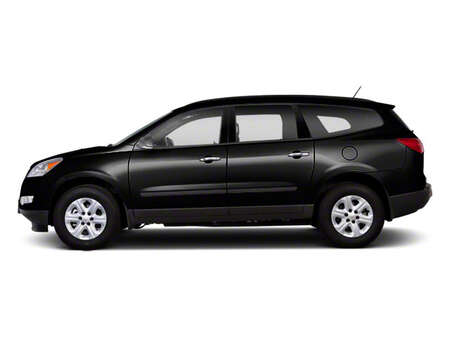 Its USB ports all around for the 2010 Chevrolet Traverse, as the handy connectors are fitted to audio, navigation and DVD entertainment systems. Beyond that and some minor equipment shuffling, the competent Traverse enters its sophomore year essentially unchanged.

As the entry-level model of its platform siblings, the 2010 Chevrolet Traverse doesn't give up much at all, providing a roomy, comfortable cabin and a pleasant-to-drive demeanor.

Volatile gas prices and altered priorities have forced many consumers to reconsider the need (or lack thereof) for a large, gas-thirsty, truck-based SUV. Without the need for massive towing capacity or off-road capability, these folks could be well served by the oh-so-practical and user-friendly minivan. Of course, many of them can't get around the minivan's less-than-flattering image.

Filling the breach is the large crossover SUV, a vehicle that combines nearly the same amount of family-focused functionality and car-based dynamics of a minivan with the ruggedly sporty appearance and personality of an SUV. And in this segment, the 2010 Chevrolet Traverse is one of the better vehicles for providing plenty of space, comfort and performance for an attractive price.

One of four GM quadruplets (that also includes the Buick Enclave, GMC Acadia and Saturn Outlook) built on the same "Lambda" platform, the Traverse was introduced just last year. Though it may seem like overkill to have four versions of essentially the same vehicle, they have all done well in the marketplace, with the Traverse being the value leader. As with its siblings, the Traverse boasts greater amounts of passenger and cargo space than a typical full-size, truck-based SUV while also delivering a more pleasant, car-like driving experience and superior fuel economy.

Though it's the entry-level Lambda, the Traverse doesn't necessarily look it. It shares some handsome styling cues with the well-received Malibu -- such as the split mesh grille outside and the dual-cockpit dash theme inside -- and generally makes a convincing argument for itself. True, it does have some faults, including relatively poor outward visibility and a third-row seat that's not as comfortable  as the Ford Flex's. Nor is it as comfortable to drive as the Mazda CX-9. But if you're looking for a well-performing people mover that hauls a lot of cargo and doesn't scream "mommy (or daddy) mobile", the Traverse deserves your serious attention.

The Traverse LTZ ups the luxury ante with 20-inch wheels, leather seating, heated and ventilated power front seats (with driver memory settings), Bluetooth connectivity and remote engine start. Many of the standard features on upper trim levels can be added to the lower ones via optional packages. Other option highlights include a trailering package, a navigation system (with real-time traffic, a rearview camera, and a USB port), dual sunroofs and a rear-seat DVD entertainment system (with USB port).

There is only one engine/transmission combination available for the Chevrolet Traverse -- a 3.6-liter V6 mated to a six-speed automatic with manual shift control. In the LS and LT trims, which have a single exhaust system, the V6 produces 281 horsepower and 266 pound-feet of torque. In the uplevel LTZ, output jumps up to 288 hp and 270 lb-ft thanks to a dual-outlet exhaust.

Antilock disc brakes, traction and stability control, front seat side-impact airbags and side curtain airbags for all three rows are all standard on every 2010 Chevrolet Traverse, as is one year of GM's OnStar service, including turn-by-turn navigation and hands-free phone connectivity.

In both frontal- and side-impact crash tests performed by the National Highway Traffic Safety Administration, the Traverse received a perfect five-star rating for its protection of occupants in head-on and side-impact collisions. The Traverse also aced the Insurance Institute for Highway Safety crash tests, where it got the highest rating of "Good" in both the frontal-offset and side-impact tests.

Inside the roomy cabin of the Traverse is an attractive layout in a two-tone color scheme with brushed aluminum and chrome trim. The instrument panel consists of dual gauges featuring bright white numbers on a black background that are simple and easy to read. Minor complaints include a few lower-grade interior plastics and audio and climate controls that consist of too many small and similar-looking buttons.

Depending on the configuration chosen, the Traverse seats either seven (with second-row captain's chairs) or eight (split-folding second-row bench seat) passengers in three rows. The first- and second-row seats are quite comfortable and supportive, and the split-folding third-row seat – which is often a kids-only zone in traditional SUVs -- can accommodate adults in reasonable comfort. Maximum cargo capacity is a generous 117 cubic feet with second- and third-row seats folded down, and even with all three rows of seating in use, there are still a useful 24 cubic feet of luggage space.

Like the other three large General Motors crossovers, the 2010 Chevrolet Traverse hits a happy medium between secure handling and a comfortable ride. However, you'll never forget that it's a big and heavy vehicle (4,925 pounds with all-wheel drive), and it feels a bit more cumbersome to drive than other large crossovers on the market. Opting for the larger 19- or 20-inch wheels can also degrade the vehicle's ride quality somewhat. We have no complaints about the 3.6-liter V6, as it provides peppy acceleration in almost all situations. Previously, the six-speed automatic transmission was often reluctant to downshift, but a reprogramming for 2010 has remedied the situation.