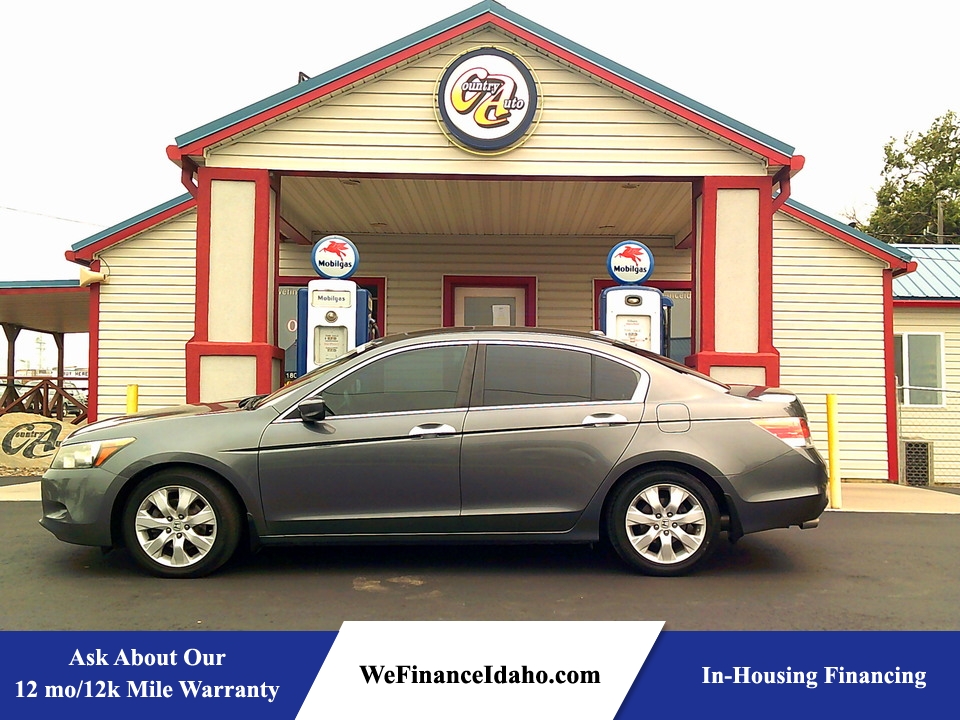 The 2009 Honda Accord offers an appealing combination of spaciousness, a relatively upscale feel and a reputation for reliability. However, its ride quality and overall performance are merely adequate for this segment.

Following a complete redesign last year, the 2009 Honda Accord carries over unchanged, though the V6's official engine output is up a smidge after further testing revealed slightly more power than previously measured.

For two decades now, there have been two perennial no-brainer choices for a midsize family sedan: the Honda Accord and the Toyota Camry. Both have legions of satisfied owners and top reputations for reliability and safety. Deciding between the two often came down to this: If you wanted a softly sprung car with superior isolation, the Camry was the way to go -- and if you wanted a sporty ride and could live with a tad less refinement, the Accord was the sedan of choice. There's still some truth to this adage for 2009, but things have changed rapidly in the midsize sedan segment. For one thing, the Accord has grown bigger and softer with its latest redesign; for another, the competition has caught up.

Here's how things shake out for the Accord in today's family sedan free-for-all. The Honda is now roughly the fourth-sportiest entrant, by our count, trailing the canyon-king Nissan Altima, the upsized but still capable Mazda 6 and the often-overlooked Ford Fusion/Mercury Milan twins. It's also still hampered by traditional Honda foibles like elevated road noise and exaggerated brake pedal vibration during hard stops. Performance is likewise uninspiring -- while the upgraded 2.4-liter four-cylinder in the EX is pleasant, the base engine is merely adequate, and the top-of-the-line 3.5-liter V6 is overmatched in terms of acceleration by many rival six-cylinder engines.

Don't get us wrong -- the 2009 Honda Accord remains an appealing car, for a variety of reasons. First of all, it's got an ace up its sleeve that most competitors don't: its sterling reputation for reliability. Also, the Accord has ballooned to such a degree that the EPA classifies it as a "large car," and it shows in the commodious cabin, which boasts one of the most accommodating backseats of any family sedan. The center stack is undeniably button-happy, but its premium look and feel evokes luxury sedans such as the Infiniti M series. Like most Hondas, the Accord feels extraordinarily well constructed, and its interior materials are a cut above the rival Camry's. Moreover, that reputation for reliability pays off when it's time to sell, as the Accord boasts one of the best resale values around.

The Accord is also one of the few family sedans that's available in a coupe body style, and we should note that the coupe is substantially sportier than the workaday sedan, particularly with the optional V6 and coupe-exclusive six-speed manual. Whichever style you prefer, the Accord remains a smart choice on the strength of its proven track record. However, unlike Accords of the past, it doesn't really elevate itself above the competition once you get behind the wheel. As before, you're not going to go wrong with the Accord, but we'd advise taking a close look at the above-mentioned competitors, along with the Hyundai Sonata and much improved Chevrolet Malibu before making your decision.

The 2009 Honda Accord is available in sedan and coupe body styles. The sedan comes in LX, LX-P, EX and EX-L trim levels, while the coupe comes in LX-S, EX and EX-L trims. The base LX sedan comes standard with 16-inch steel wheels, keyless entry, full power accessories, cruise control, a tilt-telescoping steering wheel, fold-down rear seats and a six-speaker stereo with a single-CD/MP3 player and an auxiliary audio jack. The LX-P sedan adds 16-inch alloy wheels, auto up-down front windows and a power driver seat. The coupe's base LX-S trim includes the LX-P's equipment with the exception of the passenger-side auto-up window and power driver seat, and it adds an in-dash six-CD changer.

Upgrading to EX trim nets 17-inch wheels and a sunroof for both body styles, while the EX sedan gains the in-dash six-CD changer and the EX coupe gets a premium stereo system with a subwoofer. The EX-L trim level adds leather upholstery, auto-on headlights, dual-zone automatic climate control, a leather-wrapped steering wheel, heated front seats and satellite radio. The EX-L sedan nabs the premium stereo system from the EX coupe, while the EX-L coupe gets the power driver seat.

The lone option is a navigation system. It's only available on EX-L models, and it includes voice-activated controls and Bluetooth connectivity.

The 2009 Honda Accord offers three engine choices. The LX and LX-P sedans are motivated by a 2.4-liter four-cylinder that generates 177 horsepower and 161 pound-feet of torque. An upgraded 190-hp version of that 2.4-liter engine powers EX sedans and all coupes. A five-speed manual is standard with the four-cylinder engines, and a five-speed automatic is optional. Available on the EX trim levels is a 3.5-liter V6 that produces 271 hp and 254 lb-ft of torque (251 lb-ft on manual-shift V6 coupes). Sedans with the V6 can only be had with a five-speed automatic, but a six-speed manual is a no-cost option on V6 coupes.

Acceleration is class-competitive with either of the four-cylinder engines, but the last V6 sedan we tested recorded a middling 7.5-second sprint from zero to 60 mph, well behind competitors like the Mazda 6 s and Nissan Altima 3.5 SE. In terms of fuel economy, four-cylinder Accords are about average, while V6-powered models receive slightly above-average ratings. Four-cylinder cars with automatic transmissions achieve 21 mpg city/30 mpg highway and 24 mpg combined, while the manual transmission bumps those numbers up to 22/31/25. The six-cylinder returns 19 mpg city/29 mpg highway (28 in automatic coupes) and 22 mpg combined with the automatic, though the manual-shift V6 coupe drops to 17/25/20, as its version of the V6 lacks cylinder-deactivation technology. Notably, we have had a hard time replicating the EPA's 29 mpg highway figure in a long-term test of a 2008 EX-L V6 sedan.

All Accords come standard with antilock disc brakes, stability and traction control, front side airbags and full-length side curtain airbags. In government crash tests, the Accord sedan received a perfect five stars for front passenger protection in frontal and side impacts; however, it received just three stars for rear passenger side-impact protection. The Accord coupe was perfect except for its four-star side-impact protection for front passengers. The Insurance Institute for Highway Safety gave the Accord its top rating of "Good" for both frontal offset and side-impact crash protection.

The 2009 Honda Accord features a tightly constructed interior with generally high-quality materials, though it's no longer head and shoulders above the competition in this regard. The center stack looks sophisticated, but it's overly cluttered with identical-looking buttons, in contrast to the user-friendly layouts in past Accords. The optional navigation system boosts the button tally further, but its voice commands, high-mounted screen and multipurpose knob are at least user-friendly. The top-of-the-line leather seats are polarizing -- some of us love their bold contours and firm support, while others have complained of numbness after long trips and excessive nonadjustable lumbar. This is by far the largest Accord ever, so expect a plentiful supply of passenger room, particularly in the sedan's rear compartment. However, the 14-cubic-foot trunk in the sedan is oddly small given the car's imposing overall size. The coupe's trunk offers a respectable 11.9 cubes.

With its latest redesign, the 2009 Honda Accord sedan has lost some of the sporty edge once attributed to it. In particular, the body rolls too much in corners, though we admire the Accord's nicely weighted and extraordinarily communicative steering. Notably, the Accord coupe's handling is significantly better. Around town, the ride quality isn't as comfortable as in the Camry or even the more firmly sprung Mazda 6, but most buyers won't find it objectionable. Another minor concern is the slightly higher amount of road noise than expected in this segment.

The base four-cylinder motor is unremarkable, providing leisurely and rather raucous acceleration, but the upgraded 190-hp version is more refined and offers the same fuel economy. The V6 lacks bottom-end torque, and Accords so equipped feel noticeably less swift than V6-powered versions of the Altima, Camry and Mazda 6, as well as 3.6-liter versions of the Malibu and Saturn Aura. The V6 coupe's exclusive manual transmission maximizes this engine's potential. Stopping power is certainly adequate, but the brake pedal vibrates harrowingly when you really stomp on it.