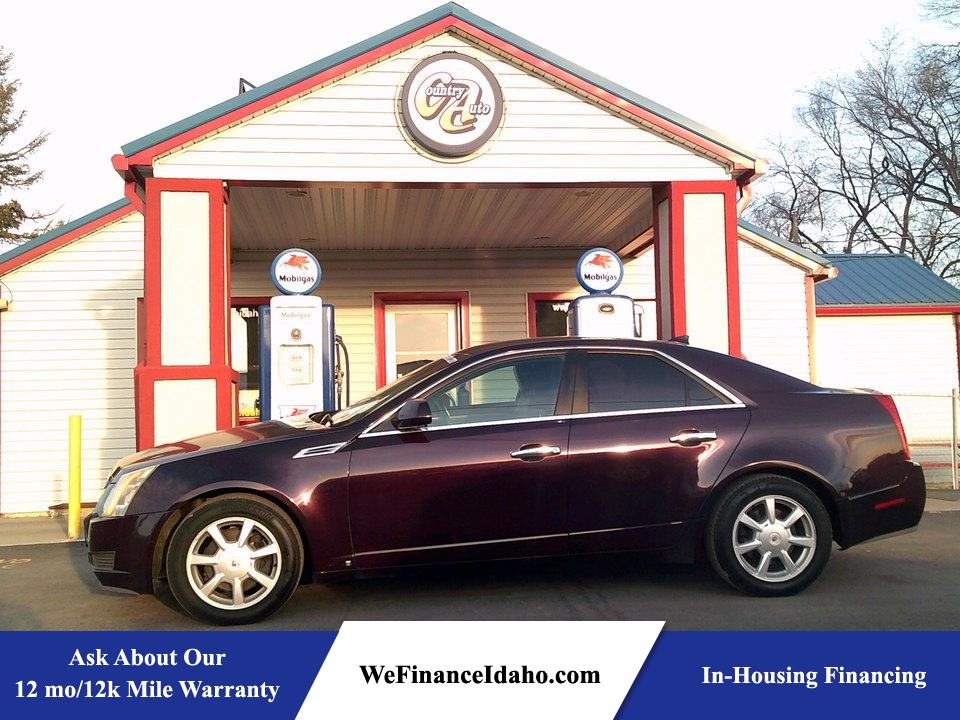 A brash American athlete that has benefited from schooling abroad, the 2009 Cadillac CTS has no problem going toe to toe against the top entry-level luxury sport sedans.

After its complete redesign last year, the Cadillac CTS rolls into 2009 with a singular change: the adoption of Bluetooth technology, which actually debuted late last year.

Much like a ruffian attending a ritzy summer camp, the original Cadillac CTS found itself in an awkward situation. Sure, this Caddy won respect, thanks to its decent athletic ability, but it lacked refinement -- a droopy-jeaned, scruffy-bearded interloper among the Polo-outfitted, impeccably groomed class. Being larger than the typical entry-level luxury sport sedan, that first CTS offered more cabin space than its rivals and wrapped it all up in edgy styling. The latter, however, was considered too busy by some critics due to its excessive number of character lines and oversized lights. But it was the cabin that hurt this "upscale" model the most, as its style and materials quality were far behind those found in Audi's A4 or BMW's 3 Series.

Last year's rebirth saw a determined effort to bring the CTS into the Polo-wearing crowd of guys named Chip. Not only is this one Caddy that actually zigs -- to pinch an old tag line -- by adding more power and improved driving dynamics, it also dons a new set of clothes via neatly tailored sheet metal and a much-improved cabin. The latter was not merely a leap over its predecessor but a complete moon shot, with a handsome design, state-of-the-art technology and top-notch materials fitted throughout. In the span of one generation, Cadillac has gone from a segment also-ran in this regard to arguably class-leading. Wisely, the company left the 2009 Cadillac CTS well enough alone, adding only Bluetooth connectivity to the car's impressive list of features.

In this case, "well enough" means a tuned suspension that graduated with honors from the Nürburging school of handling etiquette. It also means a pair of willing V6s -- the base 258-horsepower engine as well as the optional high-output version that features direct-fuel-injection technology and makes an impressive 304 hp. Furthering its appeal, the CTS can also be had with all-wheel drive.

Now, with a legitimate player in the sport sedan game, Cadillac's boastful old tagline "The Standard of the World" might actually be believable by those who don't have firsthand knowledge of the Eisenhower years. Certainly, the 2009 Cadillac CTS, with its dashing style, fine road manners and classy cabin, can more than hold its own against rivals from Audi, BMW, Infiniti, Lexus and Mercedes-Benz. If you're shopping for an entry-level luxury sport sedan, the CTS is worthy of serious consideration.

The 2009 Cadillac CTS is a midsize luxury sport sedan. Two trim levels are offered, which differ chiefly in the engine fitted. Both come with 17-inch wheels, leatherette seating, an eight-way power driver seat, dual-zone automatic climate control, OnStar and a CD/MP3 player with an auxiliary audio jack and satellite radio.

The navigation and surround-sound systems can be added individually on top of the other packages. Bluetooth connectivity is also included when you order one of the major packages.

The 2009 Cadillac CTS is available with one of two V6 engines. Standard power comes from a 3.6-liter V6 generating 258 hp and 252 pound-feet of torque, while the available 3.6-liter direct-injection (DI) V6 puts out 304 hp and 273 lb-ft of torque. A six-speed manual transmission is standard with the base engine, and a six-speed automatic is available. The DI engine has the automatic as standard and the manual as optional. A V6 DI CTS with the automatic that we tested accelerated from zero to 60 mph in 6.5 seconds.

The CTS is offered in both rear-wheel-drive and AWD configurations. The latter is only available with the six-speed automatic. Both engines get virtually the same gas mileage, with 18 mpg city/26 mpg highway and 21 mpg combined for the base engine and 17/26/20 mpg for the DI engine.

In Insurance Institute for Highway Safety crash tests, the CTS earned scores of "Good" (the highest possible) for both frontal-offset and side-impact tests. In government crash testing, the CTS earned four out of five stars for driver protection in head-on collisions. Front passengers received five-star protection. The CTS also received five stars for the side-impact protection of front and rear passengers.

The cabin of the Cadillac CTS is impressive both in design and in the quality of materials used. A pleasing mix of available wood accents, tasteful alloy trim and stitched soft-touch dash make the CTS interior one of the most elegant designs in its class. A telescoping steering column gives the driver a bit more space, while those in back enjoy a roomy backseat.

The screen of the optional navigation system retracts into the dash, but leaves the top inch visible as the touchscreen display for the audio system -- a slick touch. Another is the 40GB hard drive included with the premium Bose surround-sound audio system (which stores digital music) that also includes a well-designed iPod integration interface. With this setup, AM/FM and satellite radio can also be rewound, paused and resumed. TiVo junkies, rejoice. There are a few quibbles, however. Rear-seat entry and exit can be a bit tricky due to a low rear roof line, outward visibility to the rear is very poor and loading bulky items into the 13.6-cubic-foot trunk is hampered by a very short deck. Also, some have found the front seatbacks to be on the hard side, and several CTS test cars have all featured a driver seat bottom that squeaked in turns.

On the road, the 2009 Cadillac CTS is very stable and copes well with quick directional changes and weight transfer. The steering is still nicely weighted and precise. Overall, this Cadillac offers an excellent ride and handling balance that gives the Europeans a run for their money, especially when equipped with the sport-tuned suspension. That said, the CTS is larger than its like-priced competitors, and with a curb weight of almost 4,000 pounds, lacks the nimbleness of cars like the BMW 3 Series and Infiniti G35.

The new 304-hp direct-injection V6 certainly feels strong, but thanks to that hefty mass, acceleration isn't quite as quick as other 300-plus-hp cars in its class. The 258-hp base V6 and automatic transmission should still be very adequate for most consumers. The automatic is quick-shifting and can be manually controlled with a console-mounted shifter. The standard sport mode automatically holds onto revs longer during spirited driving and will downshift while braking. A major enhancement to the CTS lineup is its AWD option, which makes this Cadillac a viable option even in places with plenty of rain and snow.