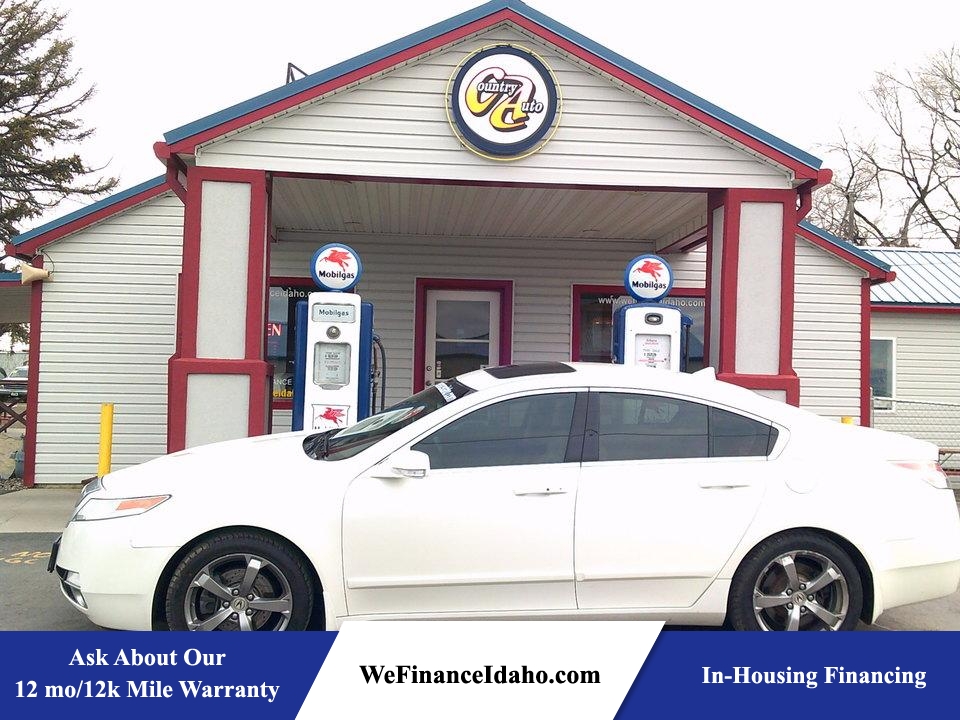 Acura addressed customer requests in its full redesign of the 2009 TL; it's now bigger, quicker and easier to maneuver at slow speeds. However, its controversial styling could be a hit or miss with consumers.

The 2009 Acura TL has been completely redesigned. It's bigger than last year's model and boasts a more powerful V6, available all-wheel drive and new technology features.

From now on, there will be no more chicken-(expletive) designs from Acura. At least, that's what one company official tells us. Acura's new goal is to be bold and brash, with aggressive lines and audacious details. The 2009 Acura TL accomplishes just that. Gone is the previous TL's wedge shape with side cut lines, replaced by prominent wheel arches and a new-look front end dominated by a shiny alloy grille. Some say the grille resembles a guillotine, or a vegetable slicer. Folks have gotten creative in their derision, but as BMW has proven, changing the status quo with a bold new styling direction can pay dividends. Acura is hoping to follow in those footsteps.

Underneath the midsize TL's radical new styling is a car that addresses many key customer complaints and requests. There's more interior room, a more powerful V6 engine, new technology features and lighter steering weighting to help with parking lot maneuvers. There are also two TL models available: the base car and the more athletic SH-AWD model. The latter's name indicates the sophisticated all-wheel-drive system that manages the model's 306 horsepower (the base car makes 280) by eliminating torque steer and providing impressive cornering abilities. Though last year's TL Type-S and its available manual transmission are no more, the SH-AWD carries on most of that car's finely tuned performance characteristics.

Like all Acuras, the TL is a showcase for the latest automotive gadgets. The base car comes standard with iPod and Bluetooth connectivity, and the optional Technology Package is a cornucopia of electronics goodies. An excellent hard-drive navigation system, real-time traffic and weather forecasts, adaptive climate control and a superb surround sound system will have technophiles playing around in their car while it's parked. Given the TL's price, it all comes at quite the bargain and Acura predicts most TLs will be so equipped.

Our opinion of the 2009 Acura TL varies depending on the model. The base TL with no options is really nothing more than a dressed-up Honda Accord V6, and as such, it's not the best choice. The Technology Package makes it slightly more persuasive, but we really think the SH-AWD model with its more powerful V6, better handling and all-wheel-drive traction is the one to get. But there are many other choices in the entry-level luxury sedan game such as the Audi A4, BMW 3 Series, Cadillac CTS, Infiniti G35 and Mercedes-Benz C-Class, along with non-luxury choices like the Hyundai Genesis, Nissan Maxima and Volkswagen CC. Acura's new TL stands out thanks to its roomy interior, competitive price, high-tech features and reputation for reliability, but we certainly suggest taking a good look around as each vehicle here has its own area of appeal.

The Technology Package available on both trims adds a hard-drive-based navigation system with voice recognition, real-time traffic, real-time weather forecasts, GPS-linked and solar-sensing adaptive climate control system, keyless ignition/entry, a rear spoiler, rearview camera and a 10-speaker Panasonic/ELS surround-sound system with DVD audio and 12.7 GB of digital music storage. All TLs can be equipped with more aggressive tires, while the SH-AWD can be equipped with 19-inch wheels.

The base model 2009 Acura TL is front-wheel drive and is powered by a 3.5-liter V6 that produces 280 hp and 254 pound-feet of torque. The all-wheel-drive 2009 TL SH-AWD gets a 3.7-liter V6 that makes 306 hp and 275 lb-ft of torque. The all-wheel-drive system is capable of transferring different levels of power to individual wheels to maximize traction and grip through turns and in inclement weather. Both TL models come standard with a five-speed automatic that includes automanual steering-wheel-mounted paddle shifters. Fuel economy for the 3.5-liter TL is 18 mpg city and 26 mpg highway, while the SH-AWD returns 17 city and 24 highway.

Along with the litany of standard and optional high-tech features, the 2009 Acura TL features a thoroughly high-tech design. The center stack juts out in a waterfall fashion toward the driver, which puts climate, audio and navigation controls right at hand. The steering wheel also features a number of buttons for audio, cruise control, the trip computer, Bluetooth and the Technology Package's large number of voice commands. With either trim (and its subsequent LCD display), a direct iPod interface is standard and one of the best available.

Interior quality and craftsmanship are quite good, but some may feel that it lacks the luxurious, glossy wood ambiance of competitors like the Lexus ES 350, Cadillac CTS and Hyundai Genesis. In particular, TLs without the Technology Package feature cheaper-looking metallic trim and audio switchgear, which gives the cabin the impression of belonging to a snazzied-up Honda Accord. On the flip side, the SH-AWD model's available two-tone color scheme, higher-quality alloy trim and contrasting stitching are a nice touch.

The TL's cabin is quite roomy, and drivers will appreciate the wide adjustment range for the well-bolstered driver seat. The rear seat is spacious and offers enough headroom for passengers more than 6 feet tall. Large flip-up headrests provide protection for occupants, while clearing rear vision when nobody's back there. The trunk holds 13.1 cubic feet of luggage, a bit less than typical for this class of car.

Since both 2009 Acura TL models feature different engines, different drive wheels, different wheel sizes and different electronic steering calibrations, they are very different to drive. The base TL is more for comfort-minded buyers who should find the 280-hp V6 more than ample for commuting. The steering's low-effort response, however, feels decidedly artificial, and the car lacks the previous TL's nimble nature.

The SH-AWD is a different story, as the "Super Handling" part of its acronym proves to be more than just hyperbole. By apportioning more power to the outside wheels during cornering (it's the same principle that makes a tank turn), the TL exhibits excellent grip and control. The SH-AWD TL's electric steering also exhibits more weighting and feedback, resulting in a more natural feel. It's not as communicative as the old TL's power hydraulic steering and the car doesn't feel as agile, but the newfound maneuverability at lower speeds is a trade-off most consumers should be happy to make. In addition to the inclement weather benefits of all-wheel drive, SH-AWD also allows for the model's 306 hp to offer lively thrust without the torque steer.