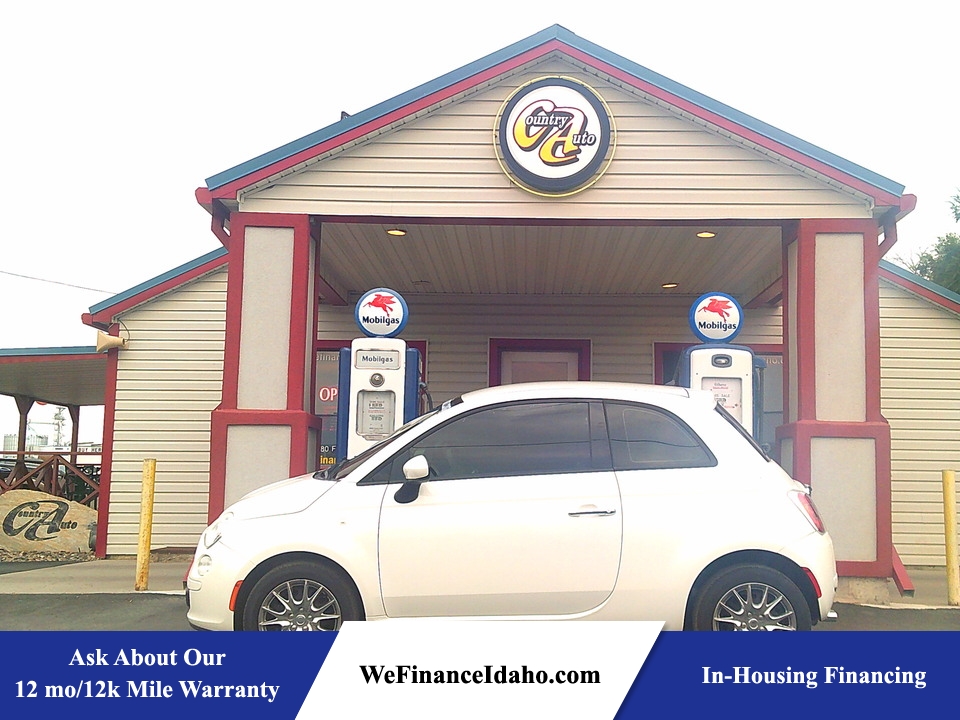 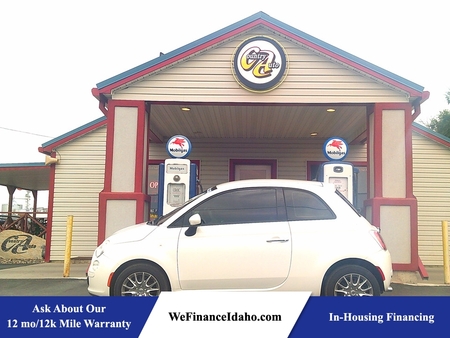 The 2015 Fiat 500 isn't the most practical or logical choice for an economy car. But what do you expect from something Italian? If you're shopping for a personable small car, the 500 is worth a look.

An automatic transmission is now available for the more powerful 500 Turbo and Abarth, while all 2015 Fiat 500 models (except the base Pop trim) get an upgraded instrument cluster. All 2015 500s also get Bluetooth audio streaming and an improved center console with an additional USB port.

The selection of fuel-sipping models has become quite diverse. Even with the expanding choices, however, few economy cars step out with as much flair as the 2015 Fiat 500. You don't have to be old enough to remember the 500's inspiration and spiritual predecessor, the Cinquecento ("500" in Italian), to appreciate its perky, fun-loving styling. Of course, you're also getting good fuel economy and easy-to-maneuver dimensions. What you might not expect is that within its pint-size body there's actually enough room for two adults to be quite comfortable.

Fiat also gives you a fair amount of variety with the 500. With hatchback and convertible body styles, five trim levels and three distinct engine choices, the 500 runs the gamut from efficiency-first commuter with an excellent 34 mpg in combined driving to the sporty Abarth version, which has a turbocharged engine, firmer suspension tuning and one of the best-sounding exhaust notes this side of a Ferrari.

Cheerful as the 500 is, it's not without compromises. Taller occupants will have to deal with limited headroom if they opt for the sunroof. The 500 convertible's cargo capacity is miniscule, and its top, when retracted, greatly restricts rear sight lines. The 500's quirky instrument panel has been improved for 2015 with a larger digital display and the center console has a better design, but the interior still is outfitted with mostly low-quality materials and almost laughably tight rear seats.

Nor is the Fiat 500 the only small car with a sense of style. The 2015 Mini Cooper and Volkswagen Beetle are direct competitors with generations of heritage and reputations for individuality. A base Mini is more fun to drive than a standard 500, and there are several interesting Mini body styles from which to choose. The Beetle's cabin is much more solidly finished than the 500 and has a lot more room, front and rear. If you'd like a dash of fun-driving character but place more value on practicality, the Chevrolet Sonic, Ford Fiesta and Honda Fit would all be better choices. Flawed as it is, though, the 2015 Fiat 500 still manages to cram a lot of style and fun into a small package.

The 2015 Fiat 500 is available either as a hatchback or convertible. The hatchback is offered in seven trim levels: Pop, Ribelle, Sport, Lounge, 1957 Edition, Turbo and Abarth. The convertible version, called the 500C, comes in Pop, Lounge and Abarth trims.

The Ribelle is essentially a version of the Pop with some retro styling features, including uniquely painted wheels; red paint for the roof, spoiler and mirror caps; gloss-black headlight housing; unique exterior paint colors; and specialized interior accents.

Much as the Ribelle is to the Pop, the 1957 Edition trim level mirrors the Lounge trim level with some retro styling added in. It gets specialized wheels, unique paint colors, a white roof and mirror caps, retro emblems and unique interior trim.

Equipment for the base-engine 500C convertible mirrors that of the hardtop Pop and Lounge trims, but the convertible also gets a three-position power cloth top and rear parking sensors.

The Sport and Turbo trims are eligible for the Comfort and Convenience package, which adds automatic climate control, satellite radio and heated front seats. A Luxury Leather package is available for Lounge models only and includes rear parking sensors, leather upholstery, heated front seats and an auto-dimming rearview mirror.

Fiat's signature Beats Premium Audio package can be added to the 500 Sport, Lounge, 1957 Edition, Turbo and Abarth; the package brings premium speakers with a trunk-mounted subwoofer and satellite radio. Some of the upper trims' features are available on the lower trims as options. Other options include a sunroof, various interior and exterior trim upgrades, an integrated TomTom navigation system and a wind deflector for convertibles.

At the top of the 500 food chain is the performance-focused Abarth. It is outfitted similar to the Turbo trim, but distinguishes itself with more power, unique wheels, distinctive exterior and interior styling tweaks and sportier suspension tuning. Seventeen-inch wheels with summer performance tires are available as an option.

Three engines are available on the 2015 Fiat 500. The Pop, Ribelle, Sport, Lounge and 1957 models receive a 1.4-liter four-cylinder that produces 101 horsepower and 97 pound-feet of torque. Power is sent to the front wheels through a standard five-speed manual transmission. A six-speed automatic is available as an option.

In Edmunds performance testing, a Fiat 500 Sport with a manual transmission went from zero to 60 mph in 10.5 seconds -- about a second slower than the typical economy car. An automatic-equipped 500C was even slower in our testing, needing 12.4 seconds to get to 60 mph. The EPA estimates fuel economy at an excellent 34 mpg combined (31 city/40 highway) for the manual. The automatic transmission cuts efficiency to 30 mpg combined (27/34).

The Fiat 500 Turbo adds a turbocharged version of the standard 500's 1.4-liter four-cylinder engine that increases power output to 135 hp and 150 lb-ft of torque. A five-speed manual transmission is standard and a six-speed automatic is optional. At Edmunds' test track, a manual-transmission Turbo posted a 0-60 time of 8.1 seconds, which is notably quicker than the base engine. Fuel economy is estimated at 30 mpg combined (28 city/34 highway) for the manual and 27 mpg combined (24/32) with the new-for-2015 automatic transmission.

The Abarth model's upgraded turbocharged engine increases power to 160 hp and torque to 170 lb-ft with the manual transmission. With the newly available six-speed automatic, those output figures change slightly to 157 hp and 183 lb-ft of torque. In Edmunds testing, the Abarth coupe with the manual transmission sprinted to 60 mph in 7.1 seconds, while a convertible with the automatic did it in 7.5 seconds. Those are respectable times for this segment, but a Mini Cooper S is still about a second quicker. Fuel economy estimates are identical to those for the 500 Turbo.

In Edmunds brake testing, a 500 Sport came to a stop from 60 mph in an impressively short 115 feet, while a 500C Lounge stopped in a still solid 124 feet. The Turbo was also in that range with a 125-foot distance. A Fiat 500 Abarth stopped in 123 feet, which is a longer braking distance than expected for a small car with summer tires.

In government crash tests, the Fiat 500 received four out of five stars for overall crash protection, with four stars for total frontal impact protection and five stars for total side impact protection. The Insurance Institute for Highway Safety awarded the 500 the top rating of "Good" in the moderate-overlap frontal-offset, side-impact and roof-strength tests. In the small-overlap frontal-offset test, however, the Fiat earned the lowest score of "Poor." The 500's seat and head restraint design was rated "Good" for whiplash protection in rear impacts.

Fiat initially favored a blend of retro and high-tech in form and function for the 500, and while aesthetics often is a matter of individual taste, we found simple functionality lacking. But the small, dim gauge cluster has been replaced (for all but the base Pop trim, anyway) by a bright digital display with large fonts and more easily deciphered menu logic. The center console is redesigned with better cupholders and an easily accessed second USB port.

The knobless radio remains a frustration, and we still find other aspects of this high-style interior less than ideal, including the controls for the standard (non-automatic) climate system. And despite the upbeat appearance and colors throughout, the quality of most materials is noticeably below the standard we've come to expect even for thrifty subcompact cars.

There's ample room in the front seats for taller occupants, thanks somewhat to the noticeably upright design of the seats. Be advised that the optional sunroof drastically cuts into the headroom, though. The convertible's folding canvas top stacks accordionlike on the rear deck when retracted, all but blocking your view directly behind. The rear seats for any 500 are pretty much what you'd expect: torture for those older than preschool age.

With just 101 hp, the standard 500's actual acceleration is undeniably on the slow side. But if it's equipped with the manual transmission, the car involves you so much in the effort that it doesn't feel all that tepid. The 500C's 12-second-plus 0-60 time, however, can't be called much else. The manual transmission shifter is pleasant to operate and the clutch action is light and linear, so shifting gears isn't a chore.

Pressing the Sport button on the dash sharpens the steering and throttle response for any model, but the firmer suspension tuning of the 500 Sport, Turbo and Abarth makes those the models to consider if you really want the most of the 500's sporty potential. Don't worry about the ride quality either, as the ride is still pretty comfortable whether driving over rutted city streets or cruising on the highway.

Speaking of the Abarth, its upgraded turbocharged engine puts a serious push in the 500's acceleration, allowing you to easily merge with fast-moving highway traffic or exploit gaps in suburban congestion. We again prefer the manual transmission, as the automatic can make the engine seem sluggish when accelerating from a stop.

The Abarth's handling is also a mixed bag. Most folks will likely find it a hoot while buzzing around town or hitting their favorite back roads thanks to its lively, agile nature. Hard-driving enthusiasts, however, will be disappointed with the somewhat top-heavy feel, which is emphasized with noticeable body roll when the Abarth is really pushed. The steering is accurate but  lacks feedback, while the car's large 37.6-foot turning circle is more like that of an SUV. That means some tight parking maneuvers and three-point turns aren't as easy as you'd expect.