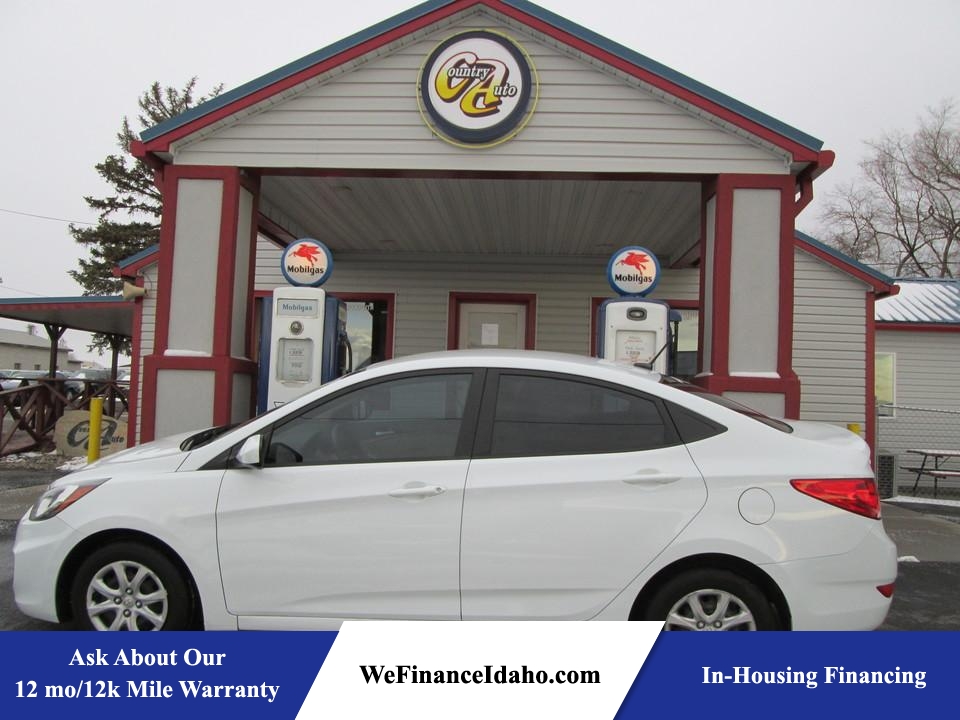 With handsome styling, above-average performance and solid build quality, the 2014 Hyundai Accent represents a strong choice for a small sedan or hatchback in the increasingly competitive subcompact car class.

All 2014 Hyundai Accents are equipped with sliding sun visors, a driver-side blind spot mirror and one-touch, triple-blink turn signals. In addition, GLS models with the Premium package and all SE models have new projector-type headlights with LED accents, approach lighting, a tilt-and-telescoping steering wheel and an auto-up driver-side window. A sport shifter kit is a new option on manual-shift SE models.

As traditional compact cars get bigger and more expensive, well-equipped subcompacts like the 2014 Hyundai Accent sedan and hatchback are moving in to take their place. Priced comfortably under $20,000 when new, the Accent is one of many strong contenders in its class. Although it's considered entry-level, this Hyundai seldom feels that way in normal driving, where you're more likely to notice its spacious interior, smooth ride and respectable acceleration.

Like many of its rivals, the 2014 Accent comes in both sedan and four-door hatchback body styles, and in either case, there's enough headroom and legroom for adults to sit comfortably in both the front and rear. Although Hyundai doesn't offer as many high-tech features as some competitors, the Accent's cabin is attractive and well built. It also stays pretty quiet during highway travel, contributing to the impression that this is a truly grown-up small car.

Typical for a subcompact car, power is provided by a rather small 1.6-liter four-cylinder engine. Acceleration is quicker than average for this class, though, and the available six-speed automatic transmission is a particular bright spot, as it shifts smoothly and unobtrusively. The Accent's EPA fuel economy ratings are also very good (it gets 31 mpg combined with either of its transmissions), but we've had difficulty hitting these mpg targets in our testing.

Of course, the 2014 Hyundai Accent isn't your only option for a subcompact sedan or hatchback. Cars like the 2014 Chevrolet Sonic and 2014 Ford Fiesta are more entertaining to drive (though neither can match the Hyundai's cargo space), while the pricier 2014 Toyota Prius C is worth considering if fuel economy is top priority. If cargo space is what you care about, the Honda Fit hatchback is a perennial favorite, thanks to its multi-configurable rear seats. Meanwhile, the Accent's mechanically similar Kia Rio cousin shares most of the Hyundai's advantages and offers a few more high-end features, including a navigation system, a sophisticated voice control interface and keyless ignition.

Ultimately, the Hyundai Accent sedan and hatchback represent a very good middle-of-the-road pick in this class. With its well-furnished interior, solid performance and attractive design, this car feels like more than the sum of its parts.

The 2014 Hyundai Accent is offered as a small four-door sedan or four-door hatchback, either of which seats five. The sedan is available only in base GLS trim, while the hatchback comes in GS and fancier SE trims.

The GS hatchback includes all of the standard GLS features along with a rear windshield wiper and, on automatic-transmission versions, cruise control. Stepping up to the SE hatchback adds a rear spoiler, a leather-wrapped tilt-and-telescoping steering wheel and the equipment from the Premium package. A sunroof is optional on automatic SE models, while manual versions are eligible for a sport shifter kit.

Powering every 2014 Hyundai Accent is a 1.6-liter direct-injection four-cylinder that produces 138 horsepower and 123 pound-feet of torque. The front-wheel-drive Accent is available with either a standard six-speed manual transmission or a six-speed automatic with a fuel-efficient Eco mode. In Edmunds performance testing, an Accent GLS sedan with the automatic went from zero to 60 mph in 9.2 seconds: a quick time for the class.

In Edmunds brake testing, an Accent sedan (with the optional rear disc brakes) came to a stop from 60 mph in 120 feet, an average distance for this class of car.

In government crash testing, the Accent received four out of five stars for overall crash protection, with four stars for overall frontal-impact protection and four stars for overall side-impact protection (although the government noted an increased risk of spinal injury for rear passengers involved in side-impact crashes). The Insurance Institute for Highway Safety gave the Accent the highest possible rating of "Good" in the moderate-overlap frontal-offset and roof strength tests and the second-best rating of "Acceptable" in the side impact test. In the small-overlap frontal crash test, the Accent earned the lowest rating of "Poor." Its seat/head restraint design was rated "Good" for whiplash protection in rear impacts.

Although it competes with other subcompacts, the Hyundai Accent is roomier than the norm, and its interior dimensions actually place it in the EPA's "compact" class. The spacious rear quarters offer enough headroom and legroom to allow even 6-footers to get comfortable in the outboard positions.

Up front, the well-shaped seats are roomy, and overall, the Accent feels upscale for a car in this class. The cabin has a friendly ambience thanks to its solid build quality, patterned upholstery, stylish dash design and tasteful materials.

Cargo space is also impressive, with the sedan offering a relatively large trunk with 13.7 cubic feet of capacity. The hatchback, meanwhile, provides 21.2 cubic feet of cargo volume with the rear seats up and a generous 47.5 cubic feet when they're folded down.

Although 138 hp doesn't sound like a lot, the 2014 Hyundai Accent is one of the quicker cars in the subcompact class. Its 1.6-liter engine responds energetically when you the hit the gas pedal, and there's plenty of power on tap for highway merging and passing maneuvers. Under hard acceleration, the engine remains smooth but can get rather noisy. Both the manual and automatic transmissions make good use of the engine's resources, but unless you're particularly fond of manual transmissions, it's hard to beat the convenience of the smooth-shifting automatic.

On the road, the Accent provides both a quiet, comfortable ride and decent handling. Although competitors like the Ford Fiesta have sportier steering and handling, the Hyundai feels balanced and composed and is well suited for daily commutes.