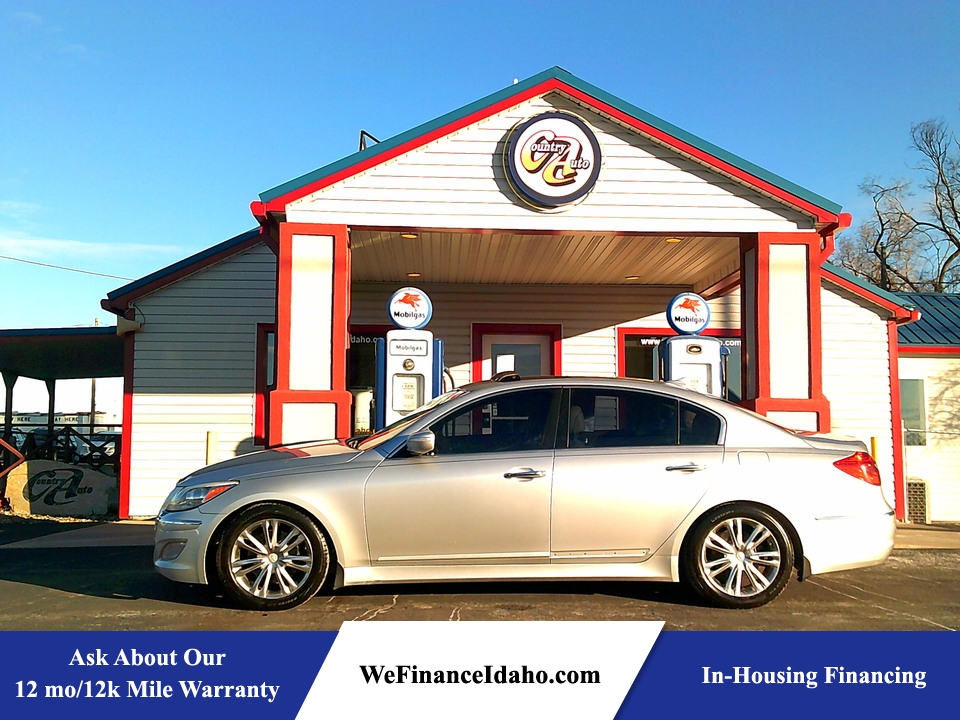 To many car shoppers, "luxury" is just another word for expensive. There are a few exceptions to this rule, however, and the most surprising is the 2013 Hyundai Genesis. It offers the power, technology and comfort of established luxury sedans from Germany and Japan, yet significantly undercuts those vehicles in terms of price.

This doesn't mean Hyundai has stripped out all the good stuff. Even in entry-level trim, the 2013 Genesis comes standard with leather upholstery, heated seats and a strong V6 engine. A V8 engine that packs quite a punch is also available. This year, however, the midrange levels are gone, leaving only the base V6 and range-topping V8. Between those two models, however, is a range of options including additional power accessories, navigation and upgraded audio systems.

From outward appearances, the Genesis delivers luxury without the expense. On closer inspection though, some of the sedan's slick veneer wears thin. The interior design looks as though it was pulled straight from a Lexus, but some materials and workmanship just miss the mark. The Genesis also lacks an all-wheel-drive option, and its non-folding rear seat limits cargo capacity. Of course, when you consider the significant value that the Genesis represents, these faults amount to a small sacrifice.

The 2013 Genesis delivers similar features and more interior space than comparably priced entry-level luxury sedans like the Audi A4, BMW 3 Series and Mercedes C-Class. Cost notwithstanding, the 2013 Hyundai Genesis is a legitimate alternative to the more expensive 2013 Audi A6, 2013 Cadillac XTS and 2013 Lexus GS 350. The Hyundai might not feel as special and lacks the brand cachet of its established rivals, but it delivers a premium luxury experience without the premium price.

The 2013 Hyundai Genesis is a full-size, rear-wheel-drive luxury sedan available in 3.8 and 5.0 R-Spec trim levels (the numbers denote engine displacement).

The Genesis 5.0 R-Spec includes all of the above, plus a more powerful V8 engine, 19-inch wheels, auto-dimming exterior mirrors, sport-tuned suspension and steering and unique exterior and interior R-Spec badging.

Powering the 2013 Hyundai Genesis 3.8 is a 3.8-liter V6 that produces 333 horsepower and 291 pound-feet of torque. The only transmission offered is an eight-speed automatic with manual shift control that sends power to the rear wheels. In Edmunds performance testing, this engine took the Genesis from zero to 60 mph in 6.4 seconds, which is a typical time for a midsize luxury sedan with a V6. EPA-estimated fuel economy is 18 mpg city/28 mpg highway and 22 mpg combined.

In Edmunds brake testing, the Genesis 3.8 came to a stop from 60 mph in 133 feet, which is significantly worse than most other luxury sedans. The R-Spec's 112-foot stop with its optional summer tires does, however, measure up to its competition.

The Insurance Institute for Highway Safety awarded the Genesis the best possible score of "Good" in its frontal-offset, side and roof strength tests.

If not for the sweeping "H" logo on the steering wheel of the Genesis, most people would think they're driving a Lexus. This is especially true of the fully loaded model, which offers a full complement of modern comforts and conveniences wrapped in interior materials that feel rich and well-built. The Genesis cabin clearly takes aim at the Japanese luxury standard-bearer, as even the crisp, bright electroluminescent gauges appear Lexus-like.

Controls are laid out very well, and it's easy to command the more complicated available electronic systems -- included with navigation -- with either a touchscreen or control knob and visual display. Physical buttons to control basic audio functions are new for 2013 (included only with the Technology package or 5.0 R-Spec model), but we still wish the Genesis offered stereo preset buttons. The multi-speaker Lexicon sound systems are also very impressive, and the 17-speaker version is one of the best systems in any car at any price.

Befitting a luxury touring car, the Genesis front seats provide plenty of driver and passenger comfort even on longer trips. The same can be said of the rear seats, which offer optional heaters, in addition to the ample head- and legroom. The rear seats don't fold down for additional cargo space, but a pass-through feature accommodates longer items that won't fit in the 15.9-cubic-foot trunk.

The soft ride of the 2013 Hyundai Genesis 3.8 indicates the car's luxury intentions, but thankfully this car isn't cursed with the disconnected floating sensation that characterizes other sleepy cruisers. When called upon, the Genesis can perform evasive maneuvers predictably and with little drama. The steering doesn't provide much feedback, but it's reasonably precise and suits the car's purpose. Thanks to extensive acoustic insulation, the Genesis is also a remarkably quiet car.

Engine power also more evenly matches other premium brands, with the Genesis 3.8's V6 delivering smooth and linear acceleration. The 5.0 R-Spec's V8, on the other hand, makes the car just downright fast, matching the acceleration potential of V8-powered sport sedans that cost thousands more. The trade-off is a firm ride that makes it less poised and controlled, especially over rough pavement, than its premium rivals.