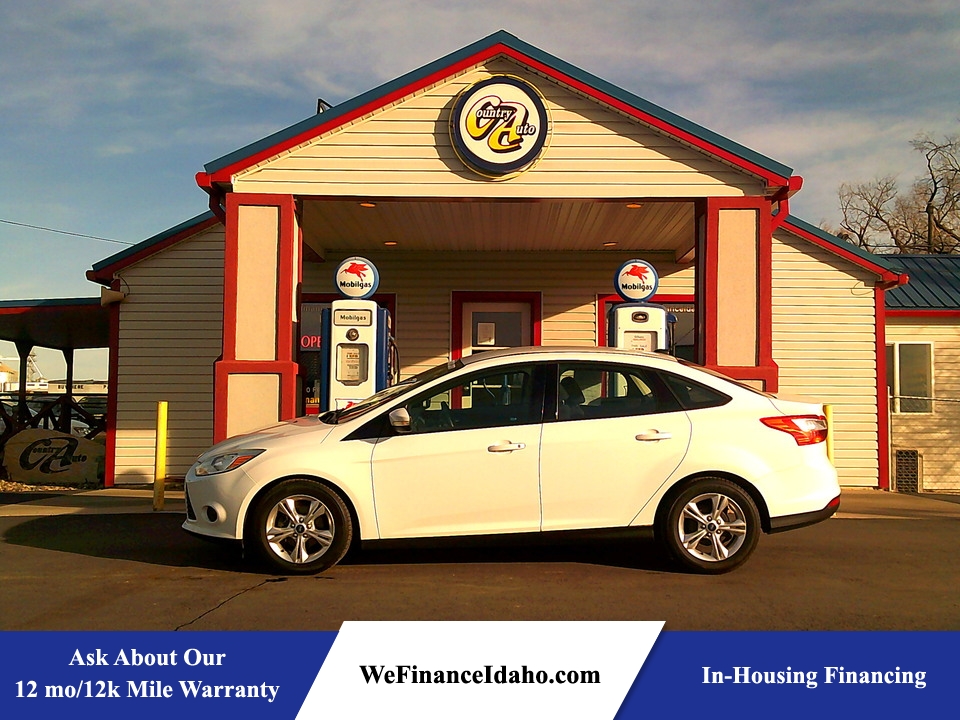 The well-rounded, well-built 2013 Ford Focus stands as one of the top choices in an increasingly competitive segment.

For 2013, Ford has adjusted the Focus' standard and optional equipment, with the main changes being the discontinuation of the SEL trim level and SE Sport package.

Debuting more than a decade ago, the original Ford Focus impressed us with its performance, value and versatility. It really was a keen choice for a small car. But as the years went on, the Focus became less desirable as newer and more refined small cars were introduced. Thankfully, Ford completely revamped the Focus last year, bringing about a much-improved interior, higher fuel economy and new features. As such, the 2013 Ford Focus stands as one of the best small cars you can buy.

All the boxes are checked here, as the Focus offers eye-catching styling, sedan or hatchback body styles, a comfortable and well-trimmed cabin, refined performance, high fuel economy and a wealth of available convenience features. Add in a wide range of trim levels that include all-electric and high-performance variants and it's easy to see why this is one of our favorite small cars.

As far as those available features, they rival those you'd usually find only in much more expensive models, and they range from a rearview camera to an automated parallel parking system that can neatly slip the car into a curbside spot without the driver ever touching the steering wheel. There's an abundance of "infotainment" features as well, such as the Sync voice control system and the MyFord Touch configurable control screens. These systems have taken a hit from a usability perspective, and although Ford has improved these systems through software updates, they do remain rather complicated.

There's more high-tech in the form of the Focus Electric, which is strictly battery-powered like Nissan's Leaf. Propelled by a 107-kilowatt (143-horsepower) electric drive motor and fueled by a 23kWh lithium-ion battery pack, the Focus Electric can be recharged in about four hours from a 240-volt power source, which is about the same amount of time as this year's updated Leaf. Owners can also keep tabs on their electric Focus' charging state via smartphone integration.

The 2013 Ford Focus nonetheless has some serious competition in the form of the well-made 2013 Chevrolet Cruze, stylish 2013 Hyundai Elantra and well-rounded 2013 Mazda 3. Yet even in this solid grouping, the Ford Focus impresses by being a sophisticated, highly refined and fun-to-drive small car that earns one of the highest compliments we can pay a car -- it looks and feels as if it should be priced higher.

The 2013 Ford Focus is a compact car that's available in sedan and four-door hatchback body styles. There are three main trim levels available -- S, SE and Titanium -- as well as the Focus Electric. The high-performance Focus ST is reviewed separately.

The S model, which is only offered as a sedan, comes with 15-inch steel wheels; keyless entry; air-conditioning; power front windows, power locks and mirrors; a height-adjustable driver seat; a tilt-and-telescoping steering wheel and a four-speaker sound system with a CD player and auxiliary audio jack. Move up to the SE and you get 16-inch steel wheels, automatic headlights, cruise control, power rear windows, a trip computer, a six-speaker sound system, Ford's Sync voice-activated phone and audio player interface, and steering-wheel-mounted audio controls. The hatchback is pretty similar but gets a 60/40 split-folding seatback (versus one solid folding seatback) and a removable cargo cover.

Spring for the Titanium model and you get the SE Appearance package, the Winter package and the MyFord Touch package (minus navigation) as standard. The Titanium also has 17-inch alloy wheels, upgraded exterior and interior trim, rear parking sensors, keyless ignition/entry and a rearview camera.

The front-wheel-drive 2013 Ford Focus has a 2.0-liter four-cylinder engine that puts out 160 hp and 146 pound-feet of torque. Entry-level S and SE models get a five-speed manual transmission standard, while a six-speed automatic transmission that Ford has dubbed "Powershift" (technically, it's a dual-clutch automated manual) is optional. The automatic comes standard on the Titanium, though the manual transmission is still available.

In Edmunds performance testing, a Focus Titanium with the automatic went from zero to 60 mph in 8.7 seconds -- a bit quicker than the norm for this class of car. With the manual, that drops to 8.3 seconds. Official EPA estimates for fuel economy stand at 28 mpg city/38 mpg highway and 31 mpg combined with the automatic transmission. These lower to 26/36/30 with the manual. The Super Fuel Economy option package raises those estimates to 28/40/33, which we confirmed to be accurate in extensive Edmunds fuel economy testing.

The Focus Electric has a 107-kilowatt (143 hp) electric drive motor that draws power from a 23kWh lithium-ion battery pack. (For reference, the Leaf has an 80-kW motor and a 24kWh battery.) Power is applied to the front wheels through a single-speed direct-drive transmission. The EPA gives the Focus Electric an energy efficiency equivalent rating (MPGe) of 110 mpg city/99 mpg highway and 105 mpg combined. The EPA also estimates the Focus Electric has an effective range of about 76 miles between charging. But as with all electric cars, actual performance will be highly dependent on driving style and environment. With a 240-volt home charger, Ford says the Electric can be recharged in 4 hours. In Edmunds performance testing, the Electric went from zero to 60 mph in 9.6 seconds, which is about the same as the Leaf.

The 2013 Ford Focus gets a long list of important safety features as standard equipment, including antilock brakes (rear drums on S and SE; rear discs on others), stability control, front side airbags and side curtain airbags. The Ford Sync system, which is available on all Focus models, also includes an emergency crash notification feature that automatically dials 911 when paired with a compatible cell phone. Ford's MyKey system, which can be used to set certain parameters for teen drivers, is standard on every Focus except the S sedan.

In Edmunds brake testing, a Focus Titanium with the Handling package and summer tires came to a stop from 60 mph in 110 feet, an expected distance for a small car with summer tires, but impressive nonetheless, as few competitors offer a summer tire option. A Focus with the SFE package stopped in 117 feet, which is impressive considering its low-rolling-resistance tires. A regular Focus SE with rear disc brakes and standard all-season tires stopped in a below-average 130 feet. The Electric took 126 feet.

While the handsome exterior of the Focus might be what initially sets the hook, it's the upscale passenger cabin that will reel you in. The interior is attractive and quiet, and the materials are best-in-class. However, the layout of gauges and controls is a little complicated even on lower trim levels. The optional MyFord Touch system, with its large central display and two smaller gauge-cluster displays, provides some neat customization possibilities. But in real-world operation, we've found that the virtual buttons are difficult to identify at a glance, and too often get pressed accidentally or fail to respond properly. Make sure to try it out on a test-drive. At the very least, though, technologies like MyFord Touch, Sync, HD radio and the available automatic parking system set the Focus apart from the pack.

The front seats are supportive and comfortable over long distances. The rear seats offer adequate headroom, but come up a little short on legroom when compared with larger competitors. The sedan's 13.2-cubic-foot trunk is on par for this class, but the hatchback model is still the better choice for the practically minded, with 23.8 cubic feet of space with the 60/40-split rear seats up and 44.8 cubic feet with them folded down. Official cargo dimensions for the Focus Electric haven't been released, but the rear battery pack does take up much of the luggage area. Don't expect to fit much more than a duffel bag or two.

The 2013 Ford Focus feels like a European car in the way it's been tuned to provide both sharp handling and a refined ride. There's very little body roll in corners, while the sharp, communicative steering is a revelation given that it's electrically assisted. The 2013 Focus is a fun car to drive, especially with the Titanium Handling package.

The 2.0-liter engine isn't as much of a standout, but it offers competitive performance and fuel economy. The five-speed manual transmission works well enough and gives the car a sportier feel, though we found ourselves wishing for a sixth gear on the highway.

You won't find such issues with the 2013 Ford Focus Electric. Its electric motor and direct-drive transmission result in a smooth power delivery. Acceleration is impressive at low speeds, but tapers off considerably. Ford put in extra effort at making the Focus Electric quiet, and indeed this is one of the quietest small cars you'll find. Handling is noticeably dulled compared to a non-Electric Focus, but compared to other electric vehicles, the Focus Electric makes a good showing.