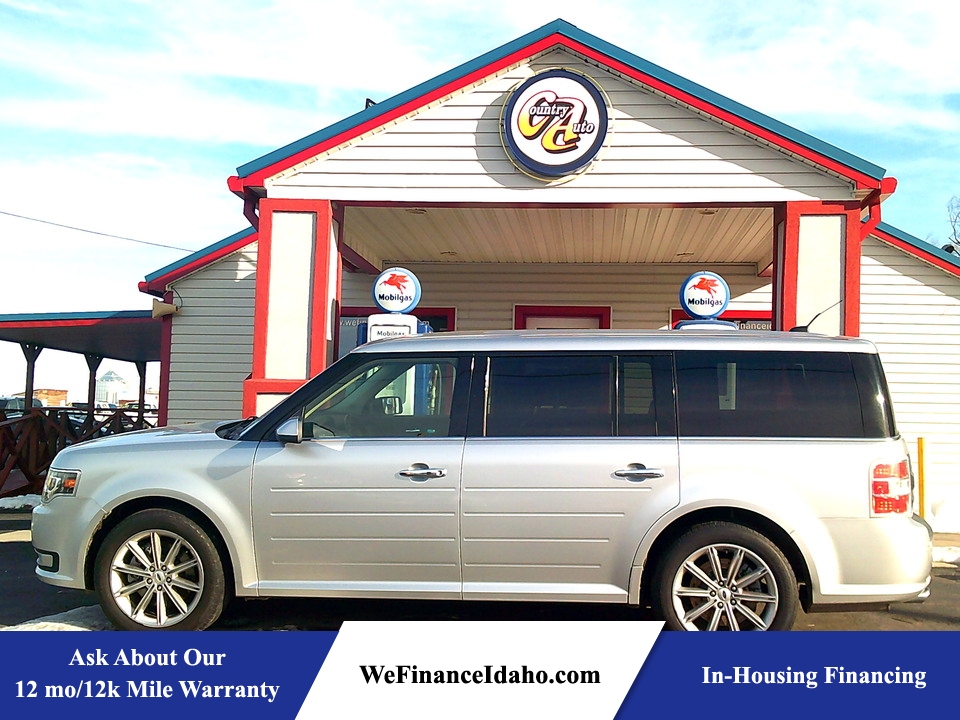 The 2013 Ford Flex has the space, the versatility, the features and the driving dynamics to make it a top choice among large family crossovers.

The 2013 Ford Flex receives a significant update this year. In addition to bolder exterior styling, Ford has added a lot of new standard or optional features, including ventilated front seats, the (updated) MyFord Touch electronics interface, automated parallel parking assist, adaptive cruise control, keyless ignition/entry, blind-spot monitoring, a power tilt-and-telescoping steering wheel and inflatable second-row seatbelts. Mechanical changes this year include a more powerful base V6 engine and electrically driven power steering on all models. Finally, the Titanium trim level has been retired, but much of its equipment is still available.

Since it was introduced four years ago, the Ford Flex seemed like something out of a retro-futurist comic book. We've always liked how it looks, but even more how it works. The 2013 Ford Flex sports an even more avant garde look with a whole new front fascia, headlamps and sleek new trim. Even the traditional blue oval Ford logo was removed from the new, minimalist grille. While this piece of rolling industrial design might not be your thing, there's little debate regarding the Flex's inherent utility, versatility and standard/optional technology.

Seating as many as seven with room to spare, the iconic Ford Flex provides nearly as much interior space and seating/cargo flexibility as a minivan but without the stigma. Access to the Flex's three rows of seating isn't as easy as a minivan's, but it is certainly better than the typical large crossover SUVs thanks to the Flex's lower, more wagonlike stance and standard second-row one-touch tumble feature. Opting for second-row captain's chairs reduces the Flex's seating capacity to six, but the added sliding feature not only increases comfort in that row, but expands legroom in the third row. As such, the 2013 Ford Flex is the rare crossover that allows 6-footers to comfortably fit in (and reach) all three rows.

Many have commented that the Flex seems a tad expensive, but note that even base models are generously equipped with a bevy of comfort and convenience features. Climbing up the trim levels not only adds a dizzying array of technology, but also available high-end interior treatments and cutting-edge safety features that rival those offered in many luxury cars. New options this year include an automated parking system, radar-based adaptive cruise control and collision warning with active brake intervention.

There are a couple downsides to the Flex, however, foremost being the Flex's boxy styling, which some shoppers find off-putting. If that is a problem, the Ford Explorer is mechanically related and similarly equipped. While it can't match the Flex's space and versatility, it does counter with a very similar driving experience. Outside of the Ford family, GM's large crossovers (Acadia, Enclave and Traverse) have room for eight and are long-distance champs. And, of course, a greater amount of practicality can be gained from minivans like the Nissan Quest. But if it were our money, we'd still choose a 2013 Ford Flex.

The 2013 Ford Flex is a large crossover/wagon available in six- or seven-passenger configurations. There are three trim levels: SE, SEL and Limited.

Most of the Limited's extra features are available on the SEL within option groups 201A and 202A. The Titanium package (SEL and Limited) is essentially an appearance group that adds 20-inch wheels, a black-painted roof, different exterior and interior trim, and faux-suede upholstery inserts.

Optional on every trim level are roof side rails, second-row inflatable seatbelts and sliding-and-reclining second row captain's chairs with a center console. The SEL and Limited can be equipped with multipanel rear sunroofs (Vista Roof) and a tow package. Stand-alone options for the Limited include a refrigerated compartment in the optional second-row console and heated second-row captain's chairs. The Limited further offers exhaustive options within groups 301A and 303A. These features include 20-inch wheels, an automatic parallel-parking system, adaptive cruise control, collision warning with brake support, a one-touch power-fold and -tumble third row, second-row heated seats, 10-way power front seats with ventilation and a power tilt-and-telescoping steering column.

Every 2013 Ford Flex comes standard with a 3.5-liter V6 that produces 285 horsepower and 255 pound-feet of torque (up from 262 hp and 248 lb-ft in 2012). Front-wheel drive and a six-speed automatic transmission with manual shift control are standard. All-wheel drive is optional on the SEL and Limited. EPA-estimated fuel economy is anticipated to be 18 mpg city/25 mpg highway and 20 mpg combined with front-wheel drive. Expect AWD to lower those estimates to 17/23/18.

Optional on the Flex Limited is a turbocharged 3.5-liter V6 (dubbed EcoBoost) that produces 355 hp and 350 lb-ft of torque. This engine is paired exclusively with all-wheel drive and a six-speed automatic with steering-wheel-mounted paddle shifters. The last EcoBoost-equipped Flex we tested hit 60 mph in a swift 6.6 seconds. Fuel economy drops to 16/21/18.

Properly equipped, both powertrains are rated to tow up to 4,500 pounds.

The 2013 Ford Flex comes standard with antilock disc brakes, stability and traction control, front side airbags, side curtain airbags and rear parking sensors. A blind-spot warning system with cross-traffic alert is optional on the SEL and standard for the Limited. Optional for both are second-row inflatable seatbelts. The Limited is also available with collision warning with brake support.

In Edmunds brake testing, both a Flex Limited with the standard 3.5-liter engine and an EcoBoost model stopped from 60 mph in 128 feet -- average for the class.

The 2013 Ford Flex interior retains its generous proportions and high quality, following the trend set in both the recently all-new Explorer and refreshed Edge with a dashboard design makeover incorporating the available MyFord Touch system. This interface consists of three display screens and the ability to input commands for various audio, phone and navigation functions via voice, touch controls or buttons on the steering wheel. It's a smart idea in theory, and it does provide some nice customization possibilities. Unfortunately, there's a learning curve involved, and even with this year's update, we've found the system can be slow to respond and the touchscreen's icons are difficult to locate and press on the move.

Overall, the Flex's interior is great, with abundant soft-touch materials and an attractive, upscale design. The spacious layout comfortably affords seven-passenger seating rivaling that of a minivan. Even the third row is accessible and sufficiently scaled for adults. The optional reclining and heated second-row captain's chairs reduce seating capacity to six, but comfort increases. Their ability to slide forward also expands third-row legroom. With either configuration, the standard power-tumbling mechanism for the second row makes getting into the third row a snap. The Flex can hold a maximum of 83 cubic feet of stuff behind the first row. While this may be less voluminous than some minivans and several large crossovers, the Flex's conveniently boxy shape makes the most of what it has.

The 2013 Ford Flex isn't all that inspiring from behind the wheel, but it certainly is not disagreeable, either. The ride is always comfortable -- even with the bigger wheels -- soaking up bumps in the road with luxury car ease. The base V6 is adequate for a vehicle this size, motivating the Flex with enough gusto to keep up with competing crossovers. The twin-turbo EcoBoost V6, meanwhile, invigorates the Flex Limited with more of a sport wagon demeanor thanks to its extra power and tighter suspension tuning. An uncharacteristically responsive electric-assist power steering system has been incorporated into all 2013 Flexes, providing for easy parking chores as well as excellent stability on the open road.