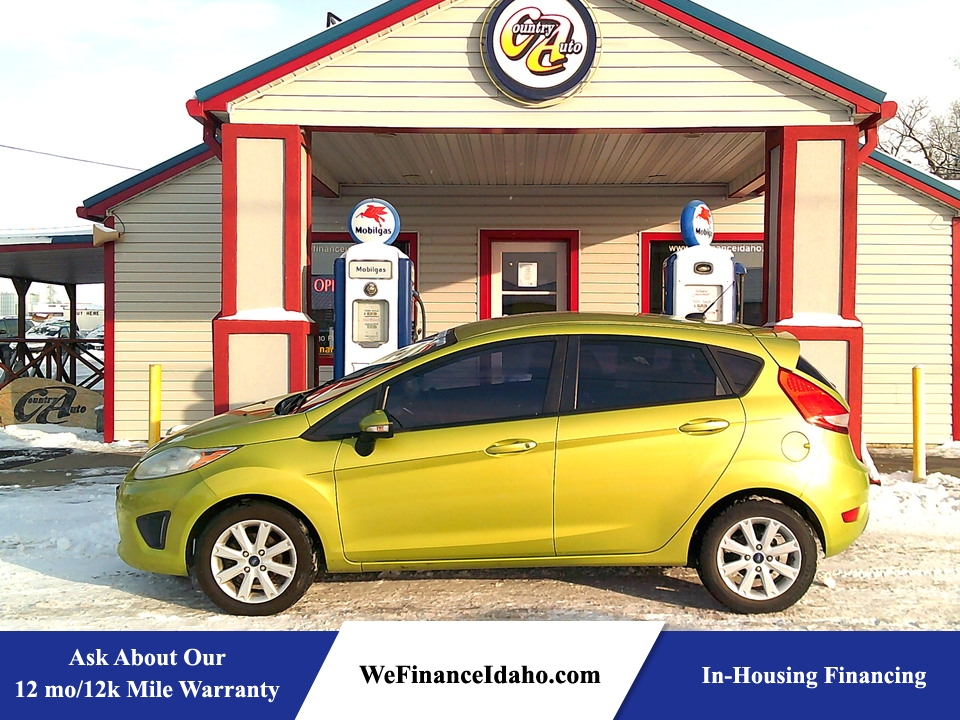 For 2013, the Ford Fiesta gets a rearranged trim and options structure, bringing it into line with the buying tendencies of past customers. As an example, the sedan and hatchback now get the same trim levels and equipment.

A 6-foot-3 man climbs out of a bright yellow 2013 Ford Fiesta. This isn't the beginning of a joke, but instead a sight we witnessed at Hertz Rent-a-Car. You see, the subcompact Fiesta is a real car, with real front seats that adjust enough for our lofty friend and a telescoping steering wheel that reaches far out to greet him. Just because the Fiesta is small doesn't mean its driver must be similarly small.

At the same time, the Fiesta still proves perfectly friendly for tall guy's much shorter wife, who appreciates that this small car feels more refined than its dimensions and price would suggest. The ride is composed, the cabin is surprisingly quiet and there is a general sense of solidity lacking from subcompacts of both the past and present. The Fiesta's appeal is further enhanced by an impressive amount of available equipment, including Sync, as Ford's Sync system, keyless ignition/entry, heated seats and even two-tone leather upholstery further enhance the Fiesta's appeal.

Our happy couple appreciates the Fiesta's fuel-efficient engine, which proves they didn't need to buy that hybrid in order to save fuel. Though it lacks electric motors, battery packs and a trendy badge, the Fiesta still manages a very thrifty 33 mpg in combined driving. That's among the best in the subcompact class.

Of course, that class does consist of other appealing sedans and hatchbacks our couple could've considered. The Kia Rio boasts a cabin that actually betters the Fiesta in terms of quality, functionality and value. The Rio isn't as spirited to drive, however, and if that's important, the turbocharged Chevy Sonic is a prime pick. Meanwhile, none of the above can compare to the versatile Honda Fit when it comes to dropping the backseats for hauling stuff.

With such worthwhile competitors, the 2013 Ford Fiesta is certainly not a slam-dunk choice. But whether you're tall, short or somewhere in between, it goes to show that subcompact is not synonymous with subpar.

The 2013 Ford Fiesta is a subcompact car available in four-door sedan and hatchback body styles. Both are available in S, SE and Titanium trim levels.

The base S comes standard with 15-inch steel wheels, power locks and mirrors, air-conditioning, a tilt-and-telescoping steering wheel and a four-speaker sound system with an auxiliary audio jack. The Convenience package adds keyless entry and a CD player.

The Fiesta Titanium is essentially an SE with the SE Appearance package, but gets 16-inch alloy wheels, chrome exterior trim, keyless ignition/entry, leather upholstery, heated front seats and an auto-dimming rearview mirror. A sunroof is a stand-alone option. The Black Sport Appearance package adds a dose of black trim to the exterior, while there are two Interior Style packages -- Race Red and Arctic White -- that provide special interior color combinations and trim.

Every 2013 Ford Fiesta is powered by a 1.6-liter four-cylinder that produces 120 horsepower and 112 pound-feet of torque. A five-speed manual transmission is standard, but a six-speed automated manual known as "PowerShift" is optional. This type of "automatic" transmission still shifts for you, but it does a better job of maximizing engine power and efficiency than a traditional automatic.

EPA-estimated fuel economy is 29 mpg city/39 mpg highway and 33 mpg combined with both transmissions. When you opt for the Super Fuel Economy (SFE) package, the highway number gets bumped up to 40 mpg, but the other estimates remain the same. It's hard to justify the package's extra cost for such a minuscule return.

In government crash testing, the Fiesta received four out of five stars for combined overall protection, with four stars for frontal protection and five stars for side crash protection. The Insurance Institute for Highway Safety gave the Fiesta the highest possible rating of "Good" in the frontal-offset, side and roof-strength tests.

With its soft-touch dash top, metallic accents, edgy styling and tight build quality, the Fiesta's cabin has a premium vibe that's unexpected in an economy car. The Titanium trim and its available Interior Styling packages go even further in making this subcompact look and feel special.

The available Sync system furthers the Fiesta's appeal as it provides voice control over the audio and Bluetooth phone systems as well as features such as voice-prompted turn-by-turn navigation (it works respectably well) and a direct connection to a 911 operator. Only the Kia Rio offers a similar degree of voice control. However, sometimes you don't want to use voice controls -- say, when surfing through an iPod playlist -- and in those moments the Fiesta's physical buttons and controls aren't as intuitive as those in the Rio and others. Even the base Fiesta's audio system prioritizes form over function in its design. Thankfully, the three-knob climate control system couldn't be easier to use.

At 12.8 cubic feet, the sedan's trunk capacity is competitive within its class. The Fiesta hatchback offers a bit less than that with its rear seat up. Unfortunately, the seats don't fold completely flat, and the Fiesta's 26 cubes of maximum cargo capacity fall considerably short of the Fit and Rio.

We can say without hesitation that the 2013 Ford Fiesta is one of the most rewarding cars to drive in its class. Though its acceleration is just average, in the real world of stop-and-go traffic and freeway merging, the Fiesta's engine is a pleasure. The eager-to-rev 1.6 delivers ample punch down low and remains butter-smooth even when taken to redline.

The manual transmission is precise and easy to shift, boasting a linear clutch and light throws. The available six-speed automated dual-clutch transmission is another unusual perk in this class, although its behavior at low speeds can seem quirky, occasionally rolling slightly back on hills or being reluctant to creep forward when parking. It's definitely different, but Ford has been refining its behavior since the car's introduction and you're likely to get used to it.

There's nothing odd with the way the Fiesta drives down the road, however. Thanks to responsive steering and sophisticated suspension tuning, the Fiesta feels at once substantial and lithe. The car handles with rewarding precision, yet the ride quality remains supple, and bumps and ruts are swallowed without drama.