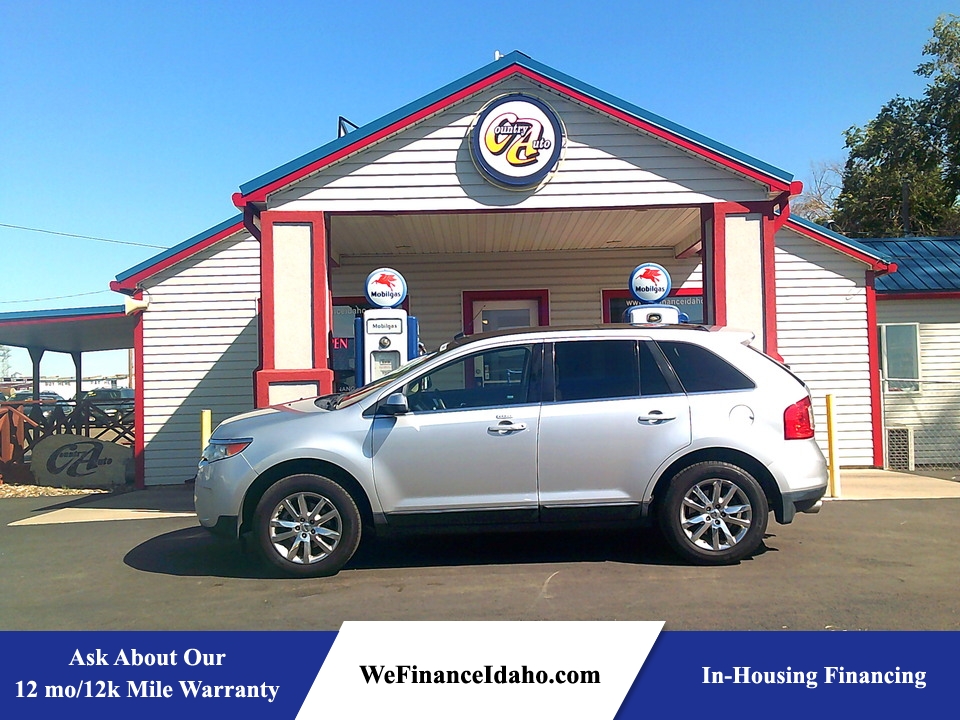 Thanks to its well-rounded nature, the 2013 Ford Edge is one of the top choices for a midsize crossover SUV.

For the 2013 Ford Edge, some features are shuffled, and the base SE trim level is now available with all-wheel drive.

Deciding on what size of crossover to buy can be tricky. Do you get a large crossover for maximum interior space and roomy third-row seating? Or do you get a small crossover for easier urban maneuverability and higher fuel economy? For some people, the middle ground is the way to go, which is why the 2013 Ford Edge midsize crossover should resonate with many shoppers.

The Edge also boasts an overall driving experience that seems European in character, with a feeling of solidity and low road noise. A 285-horsepower V6 engine is standard, and a fuel-efficient, turbocharged four-cylinder engine is optional. Oddly, you have to pay extra to get the four-cylinder, but it simultaneously produces strong power and impressive fuel economy (30 mpg highway). With these fuel savings alone, it would take an estimated four years for this "EcoBoost" engine option to pay for itself.

The 2013 Ford Edge does have a couple downsides, the most notable being the aforementioned MyFord Touch electronics interface that's drawn criticism from consumers and our editors alike for being difficult to figure out and frustrating to use. There are also a few other crossovers that might appeal more, including the off-road-capable Jeep Grand Cherokee or the similarly upscale Nissan Murano. But the Edge is a respectable choice and is worth a look if you want something that's not too big or too small.

The 2013 Ford Edge is a midsize crossover SUV that seats five passengers. It is available in SE, SEL, Limited and Sport trim levels.

From there, the Edge lineup forks into two directions. The Edge Limited comes with most of the above equipment plus 18-inch chrome wheels, heated mirrors, an eight-way power passenger seat and a 12-speaker Sony sound system with HD radio. The Driver Entry package includes keyless ignition/entry, remote ignition and a power liftgate (available separately on the SEL). Also optional are 20-inch wheels, xenon headlamps and adaptive cruise control with a collision warning system.

The Edge Sport, in contrast, essentially comes with all of the SEL's standard and optional equipment along with a more powerful V6 engine, 22-inch wheels, a sport-tuned suspension, special exterior styling and the Sony sound system.

All but the SE can be equipped with several other options. The Vision package adds automatic wipers and a blind-spot warning system with cross-traffic alert. The voice-activated navigation system includes real-time traffic, weather and other information through the satellite radio feed. There is also a panoramic sunroof and a rear-seat entertainment system with dual headrest displays. A towing package with trailer-sway control is available only on V6-powered SEL and Limited models.

The 2013 Ford Edge comes standard with a 3.5-liter V6 that produces 285 hp and 253 pound-feet of torque. A six-speed automatic transmission and front-wheel drive are standard, but all-wheel drive is optional. EPA-estimated fuel economy stands at 19 mpg city/27 mpg highway and 22 mpg combined. That drops to 18/25/21 with all-wheel drive.

Optional on all but the Edge Sport is a 2.0-liter turbocharged four-cylinder (dubbed EcoBoost) that produces 240 hp and 270 lb-ft of torque. A six-speed automatic paired to front-wheel drive is the only configuration available. In Edmunds performance testing, the Edge EcoBoost went from zero to 60 mph in 8.4 seconds -- a bit slower than average but not unreasonably so. EPA-estimated fuel economy is an impressive 21 mpg city/30 mpg highway and 24 mpg combined.

The Ford Edge Sport gets a 3.7-liter V6 that produces 305 hp and 280 lb-ft of torque. A six-speed automatic transmission (with shift paddles) and front-wheel drive are standard, but all-wheel drive is optional. In Edmunds performance testing, an Edge Sport AWD went from zero to 60 mph in 7.5 seconds -- a good time for the segment. EPA-estimated fuel economy is 19/26/22 with front-wheel drive and 17/23/19 with AWD.

Antilock disc brakes, stability control, front-seat side airbags and full-length side curtain airbags are all standard. Also standard is the programmable Ford MyKey system, which allows parents to limit vehicle speed and stereo volume for teen drivers. Optional on all trims except the SE is a Vision package that includes blind-spot and cross-traffic warning systems. The Limited can be equipped with a collision warning system.

In Edmunds brake testing, an all-wheel-drive Ford Edge Sport stopped from 60 mph in a better-than-average 122 feet. That was with giant wheels and sticky summer tires, but an Edge EcoBoost with regular wheels and rubber still managed to stop in 124 feet. That's still better than average and monumentally better than Edges of the past.

In the most recent government crash tests, the Edge received an overall rating of four out of five stars. Within that score, it received three stars for overall frontal protection and five stars for overall side protection. In Insurance Institute for Highway Safety crash tests, the Edge scored the highest possible rating of "Good" in the frontal-offset, side-impact and roof strength tests.

The 2013 Ford Edge features a modern-looking interior, especially on models equipped with MyFord Touch. This interface consists of three display screens and the ability to input commands for various audio, phone and navigation functions via voice, touch controls or buttons on the steering wheel. It's a smart idea in theory, but in practice we've found the buttons difficult to identify at a glance and too easy to press accidentally.

The Edge's front seats provide excellent support on longer trips. In back, the reclining outboard seats are nicely shaped and offer satisfactory legroom, but headroom can be tight if you order the dual-pane "Vista Roof" option. Furthermore, the middle seat is for short trips only due to its slablike seatback. Should you need a third-row seat, we highly recommend the Ford Flex.

Without the power liftgate, the Edge's rear hatch can be hard for shorter drivers to close. Cargo capacity is a respectable 32 cubic feet with the backseat in use; folding it down opens up a not-so-flat cargo floor and a max capacity of 69 cubes. That's more than a Nissan Murano can manage, but less than the Explorer or larger crossovers like the Flex and Chevy Traverse.

The 2013 Ford Edge is most notable for its comfortable, well-composed ride and a cabin stuffed full of sound insulation that provides an ultra-quiet, vaultlike environment. Handling is solid and secure, with a less cumbersome feel around corners and in parking lots than its larger Ford crossover siblings. The Sport model is, indeed, slightly sharper and more agile, but its enormous wheels degrade ride quality to the point where we doubt many drivers will accept the compromise.

The use of a four-cylinder engine in the heavy Edge may seem foolish, but this turbocharged power plant produces more torque than the base V6 and gets considerably better fuel economy. It's also surprisingly quiet in operation, and really, if it was the only engine available we wouldn't complain. Still, the base V6 is nevertheless a solid mill that few people should find wanting for power. The Edge Sport exists for those few, but that model's heavier curb weight largely negates its power advantage. The standard six-speed automatic attached to all of the above is optimized for fuel efficiency, and as such can be slow to downshift.