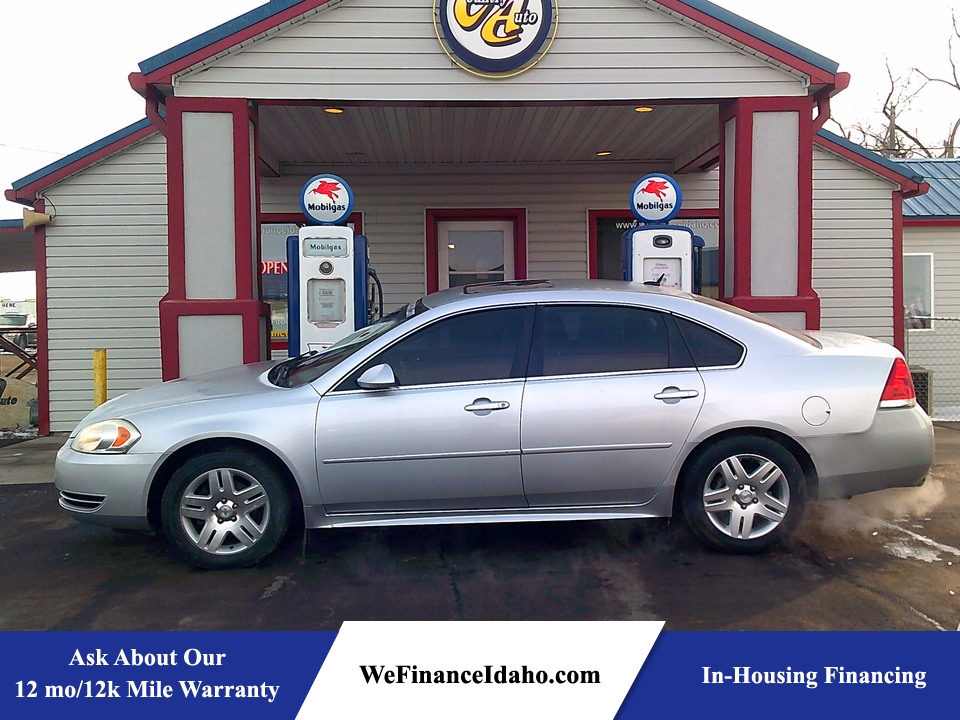 Despite a spacious cabin and comfortable ride, the 2013 Chevrolet Impala is outdone by most competitors, especially the upcoming all-new 2014 Impala. You can do better.

With a new model just around the corner, the 2013 Chevrolet Impala gets just a few minor changes, including a new Luxury Edition package.

It's been seven long years since Chevy's flagship sedan has enjoyed a major overhaul and even longer since it was redesigned from the ground up. That alone makes the 2013 Chevrolet Impala difficult to recommend, but it gets even harder when you realize that an all-new, dramatically improved replacement is on its way.

While this year's Impala still offers a roomy interior and good reliability, the full-size sedan segment is crowded with competing models that best this long-in-the-tooth model in terms of styling, performance, quality and refinement. The minor upgrades for 2013 include a new Luxury Edition package that bundles leather upholstery, heated power-adjustable front seats, a premium Bose audio system and a few other niceties, yet these enhancements aren't nearly enough to tip the scales in its favor.

Instead we strongly suggest full-size sedan shoppers have a look at more up-to-date competitors including the Buick LaCrosse, Chrysler 300, Ford Taurus and Hyundai Azera. Each is better to drive, more refined, nicer inside and generally more modern. Or you could wait a bit for the impressive new Chevrolet Impala that's just around the corner.

The 2013 Chevrolet Impala full-size sedan is offered in three trim levels: LS, LT and LTZ. Five seats are standard, but an optional 40/20/40 bench seat on the LS and LT trims brings the total to six.

Moving up to the LT gets you 17-inch alloy wheels, a rear spoiler, remote ignition, dual-zone manual climate control, a leather-wrapped shift knob, a trip computer and a folding rear seat with a center armrest.

Options include a sunroof (available on LT and LTZ only) and a new Luxury Edition package that adds many of the LTZ's extras to LT models.

The 2013 Chevy Impala comes only with a 3.6-liter V6 that puts out a healthy 300 horsepower and 262 pound-feet of torque. A six-speed automatic transmission and front-wheel drive are standard. EPA fuel economy estimates are 18 mpg city/30 mpg highway and 22 mpg combined.

The Impala earns respectable scores in government crash tests including an overall rating of four stars (out of five) in both frontal and side impacts. The Insurance Institute for Highway Safety awarded the Impala the top ranking of "Good" in both its frontal-offset and side-impact tests, but the second-best rating of "Acceptable" in the roof strength test.

The 2013 Chevrolet Impala offers a spacious passenger cabin with room for five. Opt for the available front bench seat and you have a sedan with seating for six, something that's a rarity nowadays. And in this world of ever-increasing technological complexity, the Impala's simple stereo will certainly be welcomed by many.

However, the fact remains that the Impala simply lacks many of the bells and whistles that make more modern cars technologically complex in the first place. The cabin's design is also outdated compared to most of its competitors, while the materials don't measure up to those found in many of GM's more recent models. One glimpse at the upcoming all-new Impala will reveal just how behind the times the current model is.

While the Impala's trunk offers a generous 18.6 cubic feet of cargo room, the fold-down rear seatback is optional and doesn't split 60/40. This means that sooner or later you'll have to choose between carrying a rear seat passenger and bringing home that extra-long Bjorgen box from Ikea.

The 2013 Chevy Impala's performance is something of a mixed bag. The 300-hp V6 (just introduced last year), delivers acceleration on par with many of its competitors, plus respectable fuel economy besides.

How you'll feel about the Impala's suspension calibration depends on your priorities. Ride comfort is quite good, but the car's handling is mediocre at best. Though some buyers will find this trade-off acceptable, we think you'll be happier with the more refined level of ride and handling offered by many of the Impala's competitors.