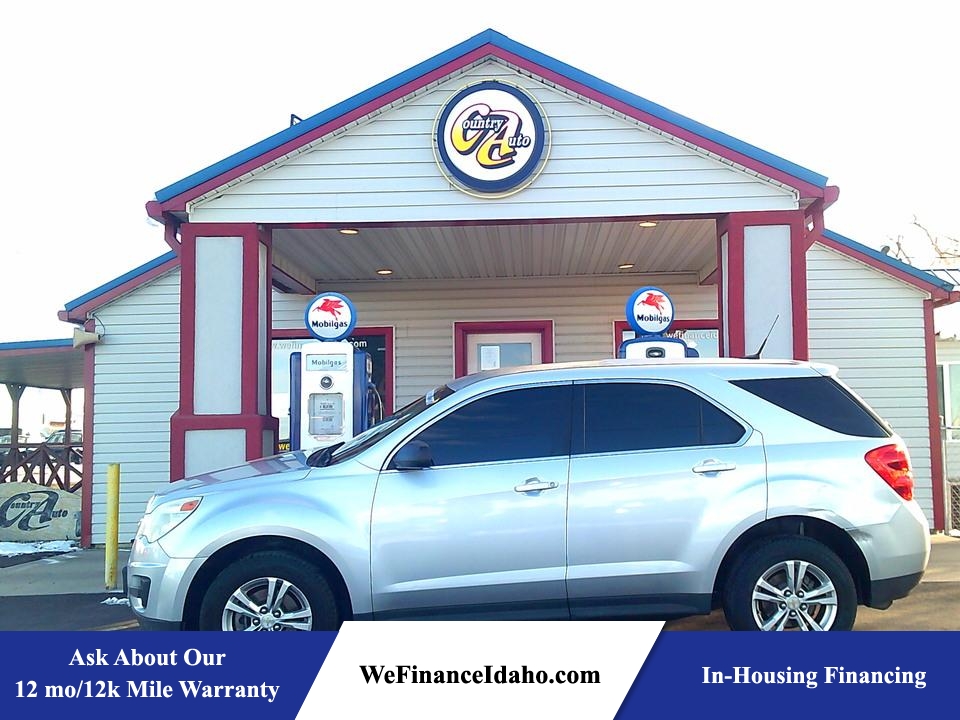 Stylish and comfortable, the 2013 Chevy Equinox is one of our top choices in the highly competitive segment of compact crossovers.

For the 2013 Chevrolet Equinox, a 3.6-liter V6 replaces the previous 3.0-liter V6 as the optional engine. There are also a few new available features, including a revised touchscreen interface, smartphone app integration (Chevy's MyLink), a rear-seat entertainment system, a power passenger seat and a remote garage door opener.

Premium look inside and out; quiet cabin with lots of storage bins; spacious and adjustable backseat; comfortable highway ride.

In an attempt to stand out in a crowded field, the 2013 Chevrolet Equinox goes tire-to-tire with its competition, including long-standing segment favorites from Honda and Toyota. It offers style, refinement, functionality and comfort, plus additional high-tech features for 2013 that help it stand out in this increasingly electronics-heavy world.

One of the best traits of the Equinox is its expandable (and expansive) rear passenger quarters. A sliding second-row seat does the trick, allowing limolike legroom for those second-row passengers. Additionally, the Chevy's quiet, comfortable ride seems more like that of a full-size crossover rather than a compact. Indeed the Equinox stretches the definition of "compact crossover," measuring up to 10 inches longer than its like-priced rivals.

In addition to the entry-level four-cylinder engine, the Equinox offers a V6, which is bigger and more powerful this year. The 182-horsepower inline-4 provides adequate performance and high EPA fuel mileage estimates, though in practice we've found those to be rather optimistic. The muscle-bound 301-hp V6 provides strong acceleration, while its mileage estimates are understandably quite a bit less.

Like its GMC Terrain twin, the 2013 Chevy Equinox does have a few minor weaknesses. Despite its greater exterior size, it doesn't match the generous cargo capacity of some competitors, such as the Hyundai Santa Fe, Honda CR-V and Toyota RAV4. It also comes up a bit short in terms of maneuverability when measured against sportier compact crossovers like the Ford Escape, Kia Sportage and Volkswagen Tiguan. These quibbles aside, the 2013 Chevrolet Equinox's well-rounded nature makes it one of the top choices in this segment.

The 2013 Chevrolet Equinox is available in LS, LT and LTZ trim levels.

Many of the standard features found on the upper trim levels can be added to less expensive models via optional packages. Other options include 18- and 19-inch chrome-clad alloy wheels, a sunroof, a navigation system with MyLink smartphone app integration (includes Bluetooth audio) and a dual-screen rear-seat entertainment system. The Safety package includes rear parking sensors, and collision and lane departure warning systems.

Every 2013 Chevrolet Equinox comes standard with a 2.4-liter four-cylinder engine with 182 hp and 172 pound-feet of torque. All Equinoxes regardless of engine come with a six-speed automatic transmission and front-wheel drive; all-wheel drive is optional.

In Edmunds testing, a front-drive Equinox with the four-cylinder went from zero to 60 mph in 9.3 seconds, an average number for this segment. EPA-estimated fuel economy is 22 mpg city/32 mpg highway and 26 mpg combined with front-wheel drive and 20/29/23 with all-wheel drive. In our experience, the Equinox has fallen short of these impressive estimates, especially on the highway.

The 2013 Chevy Equinox comes standard with antilock disc brakes, traction and stability control, front seat side airbags and side curtain airbags. Also standard is GM's OnStar emergency communications system, which includes automatic crash notification, an emergency assistance button, remote door unlock and stolen vehicle assistance. A rearview camera is standard on all trims except the LS. Standard on the LTZ are rear parking sensors and warning systems for frontal collision and lane departure.

In Edmunds brake testing, an Equinox came to a stop from 60 mph in 122 feet -- an average distance for this type of vehicle.

In government crash tests, the Equinox received an overall score of four stars out of a possible five. Within that rating, it received four stars for overall frontal crash protection and five stars for overall side protection. In frontal-offset, side-impact and roof-strength crash testing conducted by the Insurance Institute for Highway Safety, the Equinox earned a top "Good" rating.

The Chevy Equinox boasts a stylish cabin filled with premium touches. The available two-tone color schemes are eye-catching, and perfectly complement the dashboard's elegant, swooping dual-cowl design. Granted, the materials themselves are only average in terms of quality, but all in all the Equinox's interior looks more deluxe than those of most others in this segment.

This year's Equinox benefits from a new touchscreen infotainment interface (on LT and LTZ) that features customized menu features just like a smartphone. It can also be enhanced with the optional MyLink system, which uses Bluetooth streaming audio to enable integration of smartphone apps such as Pandora and Stitcher. MyLink's menus are well organized, but the occasional sluggish or non-registered responses to touch inputs can be annoying.

The Equinox boasts a nice expanse of passenger room, with 60/40-split rear seats that slide back to provide substantial rear legroom. The rear seatbacks also recline, meaning second-row occupants may have the best seats in the house. But that space does come at the expense of some cargo capacity. The 31.4 cubic feet behind the rear seats and 63.7 cubic feet with the rear seatbacks folded down should still be sufficient for most buyers, but it is less than a few rivals and something to keep in mind if maximum cargo capacity is important to you.

Deciding which of the 2013 Chevrolet Equinox's two engines is right for you depends on your priorities. The 2.4-liter four-cylinder delivers decent acceleration while returning strong fuel economy (although, as noted above, we've found it difficult to match the EPA's estimates). The 3.6-liter V6 delivers significantly better performance in everyday driving, while also increasing the towing capacity from 1,500 to 3,500 pounds.

Otherwise, driving the Equinox is an unremarkable experience, with so-so handling and a vague feel to the steering compared to some sharper competitors. But realistically, we suspect this won't be an issue for most buyers. More likely, the lack of rear visibility and the poor video quality of the rearview camera will provoke complaints. On the plus side, the Equinox's quiet cabin, comfortable ride quality and highway stability make it a great choice for long road trips. For those downsizing from a larger SUV, the Equinox is certainly worth considering.