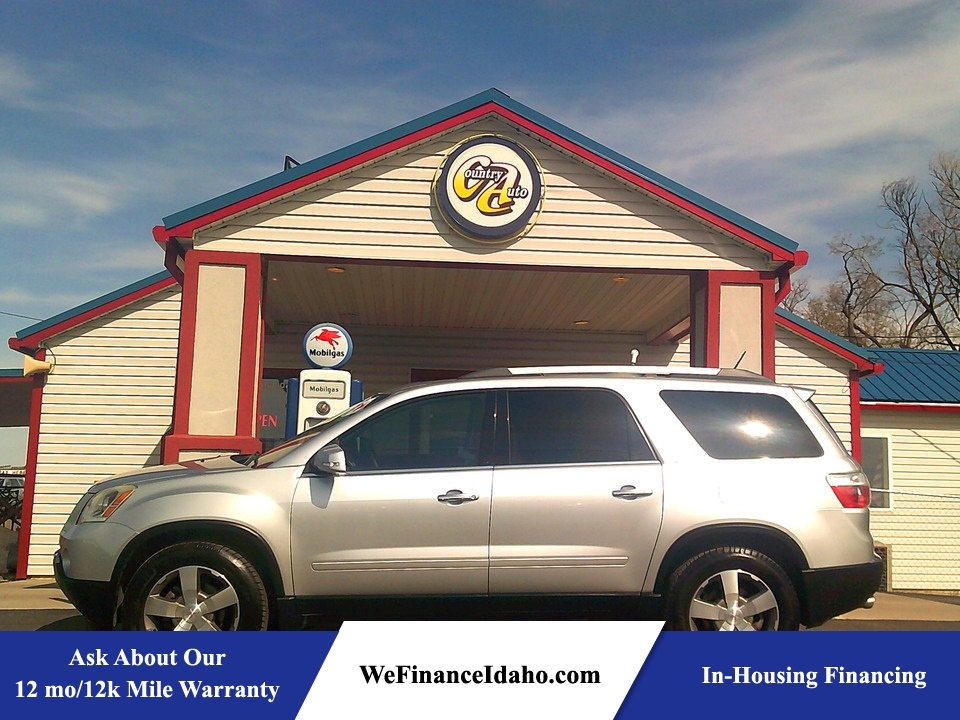 Like almost identical models from Buick and Chevy, the three-row 2012 GMC Acadia offers a winning combination of comfort, features, cargo space and performance in a utility-style package.

Other than receiving some minor feature changes, the GMC Acadia carries over unchanged for 2012.

The family hauler has changed a lot over the years, with wagons making way for minivans and then truck-based SUVs. Today, crossovers have combined the attributes of minivans and SUVs and then adopted the visual cues of the wagon. One of the best of these modern family haulers is the 2012 GMC Acadia, a large crossover that boasts a refined ride and an enormous cabin that can fit up to eight adults.

The Acadia's carlike unibody architecture means it's lighter and more space-efficient than heavier, trucklike SUVs like the GMC Yukon. As such, the Acadia offers more passenger and cargo space than its GMC stable mate, along with a more pleasant driving experience, better maneuverability, higher fuel economy and more secure handling. The Acadia is roomier than other competing large crossovers as well.

It's important to note that the 2012 GMC Acadia is one of three GM vehicles with this body style and a 288-horsepower V6. The Buick Enclave and Chevy Traverse differ in styling, interior design, some feature availability and the quality of some cabin materials, reinforcing Buick's luxury identity and Chevrolet's plain-spoken utility, while the GMC promotes its truck heritage. Mechanically, these vehicles are essentially identical. When it comes to picking one, the decision really comes down to style, price and which dealer treats you best.

Still, you'd be wise to check out the more athletic Mazda CX-9 or our top choice, the well-rounded Ford Flex. The Ford Explorer and Dodge Durango don't offer quite as much interior space as any of the above models, but each is certainly desirable in its own right. All these choices may make your search for a family hauler a little tougher, but with crossovers like the GMC Acadia around, at least it's hard to go wrong.

The Denali includes all of the SLT-2's optional items, plus unique styling flourishes inside and out, 20-inch chrome-clad wheels, increased sound deadening, a wood-trim steering wheel and a panoramic sunroof.

Every 2012 GMC Acadia is powered by a 3.6-liter V6 that produces 288 hp and 270 pound-feet of torque. A six-speed automatic and front-wheel drive are standard, but all-wheel drive is optional.

In Edmunds performance testing of a mechanically identical front-wheel-drive Chevy Traverse, it took 8.2 seconds to go from zero to 60 mph. According to EPA estimates, a front-drive Acadia will return 17 mpg city/24 mpg highway and 19 mpg combined. Opting for all-wheel drive drops this to 16/23/19.

Antilock disc brakes, traction and stability control, front seat side-impact airbags and side curtain airbags for all three rows are all standard on the 2012 GMC Acadia. Also standard is one year of GM's OnStar service, including turn-by-turn navigation and hands-free phone connectivity.

The Acadia also aced the Insurance Institute for Highway Safety crash tests, where it earned the highest rating of "Good" in both the frontal-offset and side-impact tests.

Inside the spacious cabin, the 2012 Acadia has an attractive layout, with a two-tone color scheme highlighted by accents of chrome trim (the Denali also includes wood-grain accents). Unfortunately, this trim is prone to reflect the sun into the eyes of the driver and front-seat passenger. Two other downsides include small and indistinct buttons for the audio and climate controls, and outward visibility that's more compromised than that of other competing vehicles. But in general, build quality is strong and the materials used in the Acadia are a bit better than those in its Chevy Traverse sibling.

Maximum cargo capacity is enormous at 117 cubic feet with the second- and third-row seats folded down. Even with all three rows of seating in use, there are a useful 24 cubic feet of luggage space. In total, the Acadia is a far more practical vehicle for people and cargo than the bigger GMC Yukon.

Like the other large crossovers from General Motors, the 2012 GMC Acadia delivers a nice balance between secure handling and a comfortable ride. Even so, you're always reminded that this is a large, heavy vehicle (it weighs nearly 5,000 pounds with all-wheel drive), and it feels a little more cumbersome than other large crossovers on the market. Still, compared to the truck-based GMC Yukon, the Acadia is a much nicer and easier vehicle to drive. We have no complaints about the 288-hp V6, as it provides willing acceleration in almost all situations and achieves pretty good fuel economy.