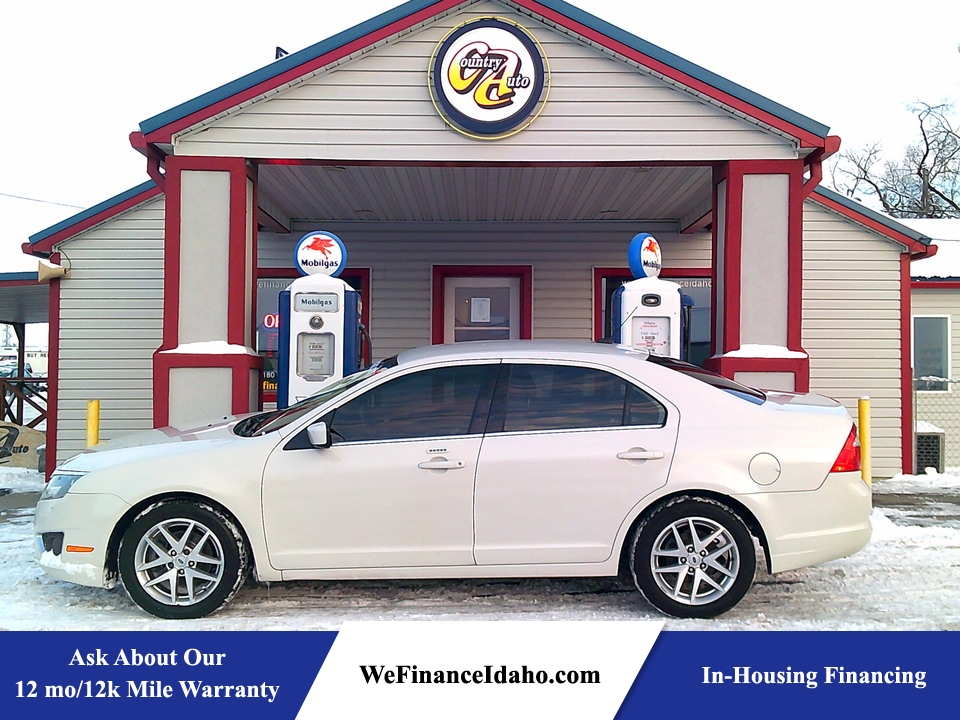 The well-rounded 2012 Ford Fusion is one of our top picks for a midsize family sedan.

There are no significant changes for the 2012 Ford Fusion.

Two years ago in a family sedan comparison test, we declared: "How about that, folks? The best family sedan can now be found at a Ford dealership." It wasn't a close contest, as the Ford Fusion received universal praise from us for a well-rounded nature that included an engaging driving demeanor, comfy ride, ample features and a spacious, well-built cabin. Of course, two years can be a lifetime in the car biz, but the 2012 Ford Fusion continues to stand tall as a top choice nevertheless.

It all starts with a vehicle architecture that gives the Fusion a great balance between a comfortable ride and agile handling. You feel connected to the road, but this doesn't come at the expense of ride comfort the way it can in so many other cars. The Fusion's interior isn't especially flashy, and its climate controls are mounted too low, but quality is strong both in terms of materials and construction. The spacious cabin is also filled with all the expected bells and whistles in this class, plus a few high-tech extras.

Under the hood, the Fusion is a tad different from its competition. Its base 175-horsepower four-cylinder is pretty much the norm, but there are two V6 engine upgrades available rather than the typical one. The more common 3.0-liter V6 produces only 240 hp, which is considerably less than its rivals. The Fusion Sport, however, gets a more competitive 263-hp V6 that gets nearly the same fuel economy as the smaller six-cylinder. In other words, if you want V6 power in your Fusion, we'd suggest the Sport.

The 2012 Ford Fusion Hybrid, meanwhile, comes with a 2.5-liter four-cylinder gasoline engine paired with an electric motor that, combined, generates 191 hp. The EPA estimates you'll get 41 mpg city and 36 mpg highway, excellent numbers for midsize hybrid sedan segment. The Fusion Hybrid is also notable in that its driving dyanmics are pretty much vice-free; it drives pretty much just like a regular Fusion.

Despite our high praise for the Ford Fusion, we still recommend checking out the new 2012 Hyundai Sonata and 2012 Kia Optima; both offer strong value, available hybrid models, distinctive styling and hard-to-beat engines. Those interested in the Fusion's available all-wheel-drive capability would also be wise to check out the 2012 Subaru Legacy or 2012 Suzuki Kizashi, as neither one requires a thirstier six-cylinder in order to get all-weather traction. Summed up, the Fusion isn't quite the runaway champ it was a couple years ago. But a truly great family sedan can still be found at a Ford dealership.

The 2012 Ford Fusion is a five-passenger midsize sedan available in S, SE, SEL and Sport and Hybrid trim levels.

Stepping up to the Fusion SE gets you 17-inch alloy wheels, automatic headlamps, foglamps, an eight-way power driver seat (with manual lumbar adjustment) and a six-speaker audio system with steering wheel controls and satellite radio. Optional is Ford's Sync system, which allows you to control Bluetooth phones, iPods and other media players through voice commands and the car's controls. The Sun & Sync package bundles Sync with a sunroof and an auto-dimming rearview mirror.

The Fusion Hybrid is equipped similarly to the SEL, with the main differences being that the Hybrid has a specialized gauge cluster and leather seating as an option.

The Fusion Sport reverts back to the SE's standard equipment but gains a sport-tuned suspension, sport-tuned steering, 18-inch wheels, the top-of-the-line V6 engine, unique exterior and interior trim, a deck-lid spoiler, a leather-wrapped steering wheel and shifter, power-adjustable driver lumbar, Sync and an auto-dimming rearview mirror. The Comfort package adds most of the SEL's extra luxury and convenience features.

The Monochrome Appearance package available on the SE and SEL includes a sport-tuned suspension, a body-colored grille, a rear spoiler, unique interior trim and special cloth upholstery. You can also get this package with the regular chrome grille.

There are several options available on both the SEL and Sport. The Moon & Tune package adds a sunroof and a 12-speaker Sony surround-sound audio system. The Driver's Vision package adds a blind-spot warning system, a rearview camera and automatic wipers. A navigation system is optional and includes HD radio, digital music storage and Sirius Travel Link (real-time traffic, weather and other information). Rear parking sensors are also available.

The 2012 Ford Fusion comes standard with a 2.5-liter four-cylinder that produces 175 hp and 172 pound-feet of torque. A six-speed automatic transmission is standard on every Fusion except the base S, which gets a six-speed manual standard and the automatic optional. In Edmunds performance testing, a Fusion with the four-cylinder went from zero to 60 mph in 8.9 seconds -- an average time for a four-cylinder midsize sedan. EPA-estimated fuel economy with the automatic is 23 mpg city/33 mpg highway and 26 mpg combined.

Optional on the SE and SEL is a 3.0-liter V6 that produces 240 hp and 228 lb-ft of torque. This engine comes standard with front-wheel drive (like all Fusions), but all-wheel drive is an option. In performance testing, a front-drive SEL with this engine hit 60 mph in 7.3 seconds -- a tad pokey for a V6-powered midsize sedan. EPA-estimated fuel economy is 20/28/23, while adding all-wheel drive drops that to 17/24/19.

The Ford Fusion Hybrid utilizes a 2.5-liter four-cylinder gasoline engine that produces 156 hp and 136 lb-ft of torque. It is paired with an electric motor that helps bump power output up to 191 hp. Power is sent to the front wheels through a specialized continuously variable automatic transmission (CVT). The result is acceleration to 60 mph from a standstill in 8.7 seconds, which is reasonably quick for a hybrid. Fuel economy is an EPA-estimated 41 mpg city/36 mpg highway and 39 mpg combined.

Every 2012 Fusion comes standard with stability and traction control, antilock disc brakes, front side airbags and side curtain airbags. Also standard is Ford's MyKey, which allows parents to set speed and stereo volume limits when their kids drive the car.

In government crash testing, the Fusion scored an overall score of four stars out of a possible five, with three stars for front protection and four stars for side protection. In testing by the Insurance Institute for Highway Safety, the Fusion received the best possible rating of "Good" in the frontal-offset, side impact and roof strength tests.

In Edmunds brake testing, the Fusion SEL came to a stop from 60 mph in 130 feet -- a bit longer than average for this segment. The Fusion Sport fared a bit better with its 123-foot stopping distance.

The 2012 Ford Fusion's cabin features soft-touch materials and solid build quality. The center stack is a bit busy, however, with a lot of similar-looking and low-mounted buttons. The available Sync system works great, integrating audio and Bluetooth functionality with voice-recognition technology to provide hands-free operation of cell phones and portable MP3 players. Its functionality improves with the optional navigation system and its touchscreen, which we've found easier to use than the newer MyFordTouch system found in the Edge, Explorer and Focus.

The Fusion Hybrid gets a distinctive gauge cluster dubbed SmartGauge, featuring a pair of color display screens flanking a traditional speedometer. There's a wealth of information displayed and the graphics are pleasant and modern. There's even one that shows animated leaves and branches -- the more economically you drive, the fuller and greener your shrubbery becomes.

There's plenty of room for passengers in the Fusion. While Ford's midsizer isn't the largest car in its class, its generous interior dimensions prove you don't really need much more. The driver seat is especially friendly for tall drivers, the rear seat is roomy enough for a pair of adults and storage space is adequate. The 16.5-cubic-foot trunk is one of the largest around, and the split-folding rear seat enables larger items to be carried inside the car. Because of its battery pack, the Fusion Hybrid has a smaller truck, with 11.8 cubic feet of capacity.

The 2012 Ford Fusion is one of the more engaging family sedans from the driver's perspective. Even with the Hybrid model, body control through corners is impressive, yet the ride remains comfortable and hushed. The Sport model feels particularly buttoned-down thanks to its sport-tuned suspension, though ride quality is never remotely harsh. We've also found the Sport's hydraulic power steering to be more responsive and natural-feeling than the electric power steering found in all other Fusions.

The base four-cylinder offers adequate performance, but it can make unpleasant droning noises under a heavy foot. While the revised 3.0-liter V6 is down on power compared to its rivals, it's plenty capable for most shoppers in this segment. Should you find the 3.0-liter unit lacking, the 3.5-liter V6 is a good match for competing V6s and doesn't suffer a significant fuel economy penalty compared to the smaller 3.0-liter V6.