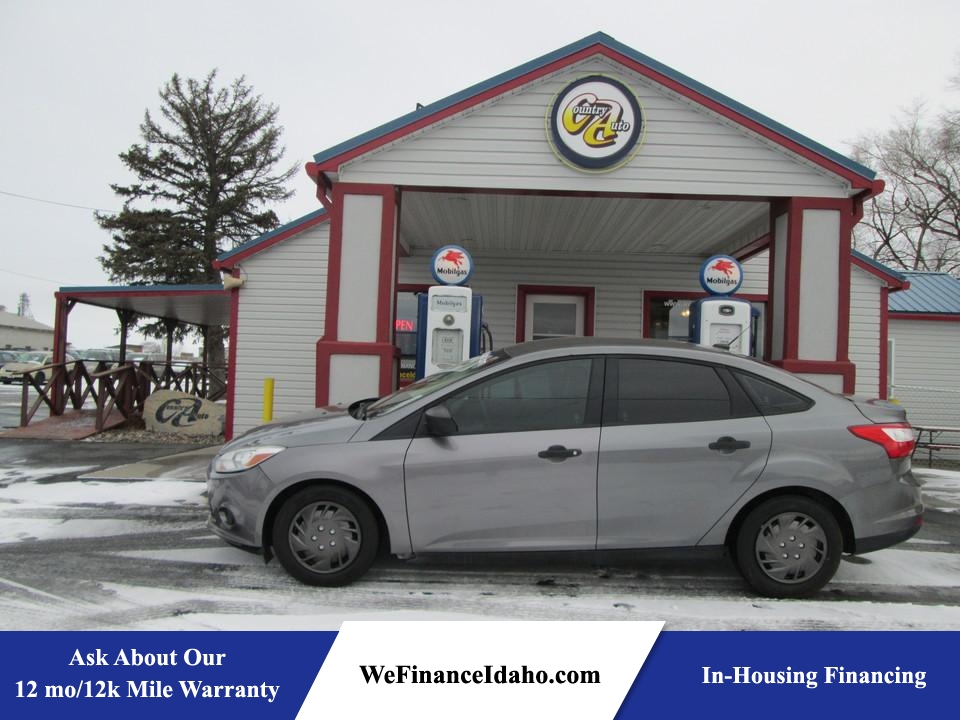 After a very long wait, American buyers finally get a world-class small car from a Detroit label. The 2012 Ford Focus is the segment's new benchmark.

The Ford Focus has been completely redesigned for 2012. An all-electric-drive version of the Focus is also new.

Of all the things for which the Ford Motor Company has become known over the years, building great small cars has not been one of them. When the Ford Focus debuted more than a decade ago, a great design was compromised by assembly issues, but once quality improved, the Blue Oval neglected the Focus, merely warming it over with midlife refreshes while other automakers rolled out successively superior models. Well, the debut of the 2012 Ford Focus finally puts Ford back in the game. And this time it's got an all-star player.

You can forget what you knew about the previous Focus -- the 2012 car is a monumental improvement. Available in four-door sedan and hatchback body styles, the new Focus benefits from eye-catching styling and a sharply designed interior dressed up with high-quality materials. It also comes with a new four-cylinder engine that's more fuel-efficient, and a suspension that delivers both above-average handling and a refined ride.

What really sets the 2012 Focus apart, however, is the wealth of new technology offered here. This includes a number of items usually found only on much more expensive models, ranging from a rearview camera to Ford's excellent Automated Parking Assist, which can neatly slip the car into a curbside spot without the driver ever touching the steering wheel. On top of this there's the latest evolution of Ford's hands-free Sync technology and the new MyFord Touch system that largely does away with buttons and knobs in favor of a large center touchscreen and voice commands.

Technology is also on display with the all-new 2012 Ford Focus Electric. Fully electric just like a Nissan Leaf, the Focus Electric uses the same underpinnings as a standard Focus, but will instead gain motivation from a 107-kilowatt (141-horsepower) electric drive motor and a 23kWh lithium-ion battery pack. Ford also says that it can be recharged in just 3-4 hours on a 240-volt charger. Through smartphone integration, owners will also be able to remotely monitor charging functions, and Ford is working with Best Buy to launch readily available home charging stations.

In what is perhaps bad news for Ford but great news for shoppers, the new Focus has arrived at a time when there are plenty of great small cars available. The upscale Chevrolet Cruze, stylish Hyundai Elantra and enjoyable Mazda 3 are all worthy of test-drives. Nevertheless, the Ford Focus impresses by being a well-balanced and highly refined small car that seems as if it should cost more than it actually does. Desirable and fun to drive, the new 2012 Ford Focus is a special car, one that offers the features and sophistication of a large car in a small, practical package.

The S model, which is only offered as a sedan, comes with 15-inch steel wheels; keyless entry; air-conditioning; power front windows; power locks and mirrors; a height-adjustable driver seat; a tilt-and-telescoping steering wheel; and a four-speaker sound system with a CD player and auxiliary audio jack. Move up to the SE and you get 16-inch steel wheels, automatic headlights, front foglights, a rear spoiler (hatchback only), rear power windows, a trip computer, steering-wheel-mounted audio controls and Ford's MyKey parental controls. The hatchback is pretty similar but gets a 60/40 split-folding seatback (versus one solid folding seatback) and a removable cargo cover.

The SEL model adds one-touch up/down power windows, multicolor ambient lighting and most of the SE's optional features. Spring for the Titanium model and you get 17-inch alloy wheels, a sport-tuned suspension, upgraded exterior and interior trim, a rear spoiler (sedan), keyless ignition/entry, MyFord Touch technology with an 8-inch center touchscreen and Wi-Fi capability, and a 10-speaker Sony audio system with satellite radio and HD radio. MyFord Touch and the Sony system are optional on the SEL.

Optional on all but the S is the Winter package, which adds heated front seats and heated mirrors with side marking lamps. The SEL and Titanium can be had with the Parking Technology package, which adds front and rear parking sensors, a rearview camera and an automated parallel parking system. Optional only on the SE sedan is a Super Fuel Economy (SFE) package, which adds 16-inch steel wheels with aero wheel covers, low-rolling-resistance tires, rear disc brakes and a rear spoiler.

The Focus Electric (BEV) will only be available as a four-door hatchback. In terms of equipment, it's similar to the Titanium trim model. For now, availability is limited to a few select states.

Under the hood, the front-wheel-drive 2012 Ford Focus has a new 2.0-liter inline four-cylinder engine that puts out 160 hp and 146 pound-feet of torque. Entry-level S and SE models get a five-speed manual transmission standard, while a six-speed automatic transmission that Ford has dubbed "Powershift" (technically, it's a dual-clutch automated manual) is standard on SEL and Titanium trim levels. It is optional on the S and SE.

In Edmunds performance testing, a Focus Titanium with the automatic went from zero to 60 mph in 8.7 seconds -- on par with similarly powered cars in the class. With the manual, that drops to 8.3 seconds. Official EPA estimates for fuel economy stand at 26 mpg city/36 mpg highway and 30 mpg combined with the manual transmission. The automatic has a 28/38/31 mpg estimate. The Super Fuel Economy option package raises those estimates to 28/40/33, which we confirmed to be accurate in extensive Edmunds fuel economy testing.

The Focus Electric has a 107-kilowatt electric drive motor that draws power from a 23kWh lithium-ion battery pack. (For reference, the Leaf has an 80-kW motor and a 24kWh battery.) Power is applied to the front wheels through a single-speed direct-drive transmission. The EPA gives the Focus Electric an energy efficiency equivalent rating (MPGe) of 110 mpg city/99 mpg highway and 105 mpg combined, which is slightly better than the Leaf. Ford promises an effective range of about 76 miles between charging. But as with all electric cars, actual performance will be highly dependent on driving style and environment. With a 240-volt home charger, Ford says the Electric can be recharged in 4 hours.

The 2012 Ford Focus gets a long list of important safety features as standard equipment, including antilock brakes (rear drums on S and SE; rear discs on others), stability control, front side airbags and side curtain airbags. The Ford Sync system, which is available on all Focus models, also now includes an emergency crash notification feature that automatically dials 911 when paired with a compatible cell phone. Ford's MyKey system, which can be used to set certain parameters for teen drivers, is standard on every Focus except the S sedan.

In Edmunds brake testing, a Focus Titanium with the Handling package and summer tires came to a stop from 60 mph in a remarkable 110 feet. That's better than many luxury sport sedans, but a Focus SE with regular tires stopped in 130 feet, which is longer than average. Curiously, the Focus SFE and its low-rolling-resistance tires split the distance at 117 feet.

While the handsome exterior of this new Focus might be what initially sets the hook, it's the total transformation of the passenger cabin that will reel you in. The interior is attractive and quiet, and the materials are best-in-class. The layout of gauges and controls is a little complicated even on lower trim levels, while the touchscreen controls in MyFord Touch can make things even more head-scratching. However, a midyear software update has improved MyFord Touch considerably and we highly encourage potential buyers to confirm that the Focus in question has been updated accordingly. At the very least, though, technologies like MyFord Touch, Sync, HD radio and the available automatic parking system set the Focus apart from the pack.

The front seats are supportive and comfortable over long distances. The rear seats offer adequate headroom, but come up a little short on legroom when compared with some of the competition. The sedan's 13.2-cubic-foot trunk is on par for this class, but the hatchback model is still the better choice for the practically minded, with 23.8 cubic feet of space with the 60/40-split rear seats up and a generous 44.8 cubic feet with them folded down. Official cargo dimensions for the Focus Electric haven't been released, but the rear battery pack does take up much of the luggage area. Don't expect to fit much more than a duffel bag or two.

The 2012 Ford Focus feels like a European car in the way it's been tuned to provide both sharp handling and a refined ride. There's very little body roll in corners, while the sharp, communicative steering is a revelation given that it's electrically assisted. The 2012 Focus is a fun car to drive, especially if it's the Titanium trim level with the Titanium Handling package.

The 2.0-liter engine isn't as much of a standout, but it offers competitive performance and fuel economy. The five-speed manual transmission works well enough and gives the car a sportier feel, though we found ourselves wishing for a 6th gear on the highway.

You won't find such issues with the 2012 Ford Focus Electric. Its electric motor and direct-drive transmission result in a smooth power delivery. Acceleration is impressive at low speeds, but tapers off considerably. Ford put in extra effort at making the Focus Electric quiet, and indeed this is one of the quietest small cars you'll find. Handling is noticeably dulled, however, a result of the extra weight of the electric batteries and components. The Nissan Leaf feels a bit livelier behind the wheel, thanks in no small part to the fact that all of its major masses are centralized low down between the wheels. Because the Focus Electric is an adaptation of an existing car, Ford had to put the heavy stuff where it fit, which means not only does it have to carry another few hundred pounds of weight, it's all where you don't want it, at the far ends of the car.