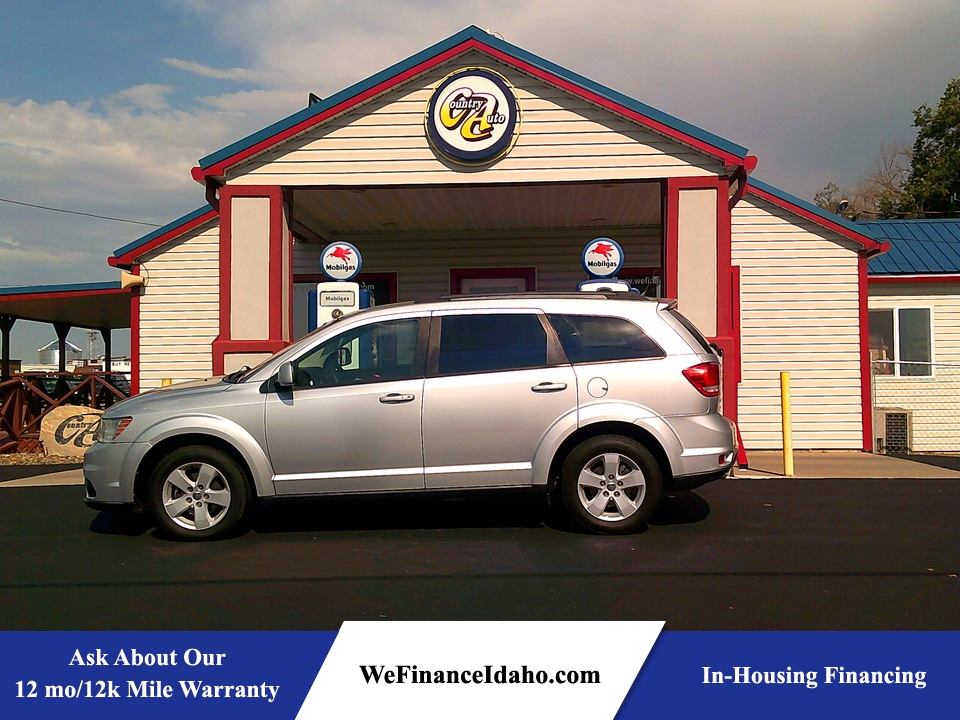 Though not quite a class leader, the 2012 Dodge Journey has enough positive attributes to make it worthy of consideration.

Besides changes to its trim names and structure, the 2012 Dodge Journey is essentially unchanged.

Once, the Dodge Journey was only a good idea compromised by half-hearted execution. Slow, ponderous and inefficient on the highway, it was further flawed by an interior that didn't fit the human form and seemed poorly made besides. Usually it takes an entirely new model to turn around such a wayward ship, but Dodge managed to bail out its midsize crossover with a bold makeover last year. The result is a compact sport-utility that suddenly is worth considering as a family hauler.

The 2012 Dodge Journey slots into the crossover SUV fray alongside tweener-sized vehicles like the Chevrolet Equinox, Honda CR-V and Toyota RAV4. Like the RAV4, the Journey offers a small third-row seat that is useful for occasionally taking on a couple of extra kids. With or without the third row, however, the Journey strikes a right-sized balance for shoppers looking for something to schlep the family around without stepping up to costlier, thirstier and more cumbersome models like the Dodge Durango and Toyota Highlander.

While the base-model Journey's four-cylinder engine remains underpowered and not especially fuel-efficient, the 3.6-liter V6 is one of the more robust engines in this vehicle segment and offers decent fuel economy. Changes made to the steering and suspension last year also make the Journey much better to drive. The most notable improvement to the Journey is within the cabin, where higher-quality materials, a pleasing design and Chrysler's latest (and very good) technology features are on display. Meanwhile, the wealth of good ideas still remains, including clever hidden storage bins and available integrated child seats.

Thanks to its well-rounded nature, the 2012 Dodge Journey easily earns our approval. Of course, its competition remains tough to beat. Both the Honda CR-V and Toyota RAV4 are fully redesigned this year, boasting higher fuel economy and more refined driving dynamics than last year's versions. You might also want to check out the Chevrolet Equinox and Subaru Forester. But overall the Journey is a smart pick for a small crossover, particularly with the V6 engine.

The Comfort/Convenience Group available on both the SE and SXT adds a six-way power driver seat with four-way power lumbar adjustment, a fold-flat passenger seatback and a storage bin under the passenger seat. The Premium Group available on the SE is identical, but includes satellite radio as well. The Popular Equipment Group includes all of the above plus remote ignition, a leather-wrapped steering wheel and shifter, an outside temperature gauge, a compass, and on the SE, 17-inch alloy wheels. Also available is a larger infotainment touchscreen.

These optional items come standard on the Crew, which also gets automatic headlamps, 19-inch wheels, chrome-like exterior trim, dual-zone automatic climate control, an auto-dimming rearview mirror, a premium audio system and Bluetooth (stand-alone option on SE and SXT). Optional on the Crew are a sunroof, a rear-seat entertainment system and leather upholstery that brings with it heated front seats.

The R/T (which arrives later in the model year) will add a monochrome exterior, special 19-inch wheels and black leather upholstery with red stitching. Otherwise, it is equipped similarly to the Crew.

The Flexible Seating Group available on every Journey adds a folding/reclining third-row seat and three-zone automatic climate control with rear air-conditioning. Integrated second-row child booster seats are also optional on every Journey, while a navigation system is available on all but the SE.

The 2012 Dodge Journey SE is powered by a 2.4-liter four-cylinder engine that produces 173 horsepower and 166 pound-feet of torque. A four-speed automatic transmission and front-wheel drive are standard. Its EPA-estimated fuel economy is 19 mpg city/26 mpg highway and 22 mpg combined -- not great given its anemic acceleration and thriftier competitors.

The Journey SXT and Crew get a 3.6-liter V6 good for 283 hp and 260 lb-ft of torque. It gets a six-speed automatic and front-wheel drive standard, but all-wheel drive is optional. At the track we recorded a 7.5-second 0-60-mph time for a Journey V6 FWD, an average time for the class. Its fuel economy stands at 17/25/20 with front-wheel drive and 16/24/19 with all-wheel drive. These are on par with the Chevy Equinox, but worse than other V6-powered small crossovers.

Every 2012 Dodge Journey comes standard with antilock disc brakes, traction and stability control, active front head restraints, front side airbags, side curtain airbags and a driver knee airbag. Integrated second-row child booster seats are optional on every Journey. In Edmunds brake testing, a Journey V6 FWD came to a stop from 60 mph in 121 feet, an average performance for its segment.

In government crash tests, the Journey received four out of five stars for overall crash protection, with four stars awarded for frontal impact protection and five stars for overall side impact protection. In crash testing by the Insurance Institute for Highway Safety, the Journey received the top score of "Good" in the frontal-offset, side-impact and roof-strength tests.

Last year's overhaul transformed the Journey's interior from one of the worst among compact/midsize crossovers to one of the best. The materials are better in quality and texture, the design is clean and modern, and its up-to-the-minute technology is pretty easy to use. We especially like the extra-large touchscreen interface available on most models.

Ongoing strengths for the Journey are its clever storage bins and integrated child seats that make it decidedly family-friendly. Also helping that cause is a versatile seating arrangement. While the sliding and reclining second-row seat is now the norm for this size of crossover, its optional third-row seat is not. Like the Toyota RAV4's, this seat is far from adult-friendly, but if you need to take a few extra kids to a T-ball game, it should come in handy.

In terms of storage space, the Journey offers a total capacity of 68 cubic feet with all rear seats folded. That's a few cubic feet smaller than the RAV4 and CR-V, but bigger than the Chevy Equinox. For smaller items, the Journey does its best Millennium Falcon impersonation with storage bins hidden under the second-row floor as well as under the passenger seat.

The four-cylinder engine found in the base 2012 Dodge Journey SE just doesn't have enough power to get this heavy crossover moving. It also doesn't provide the fuel economy to justify its dawdling pace. As such, we'd avoid it and step up to the SXT and its 3.6-liter V6. This engine is quickly spreading throughout the Chrysler lineup, and for good reason: It offers smooth, robust power and decent fuel economy. Unfortunately, its six-speed transmission can be slow to respond when a downshift (or two) is needed. On the move, the Journey is competent for the class, with a smooth ride and secure handling.

The interior wasn't the only thing that was overhauled last year. Changes to the suspension and steering gear completely transformed the driving experience. Handling feels much more confident, and the steering is now much more precise and predictable, with a light but still nicely weighted feel to it. So it's improved, although a Honda CR-V will likely feel more agile around town, while the Chevy Equinox provides an even more comfortable and quiet ride on the freeway.