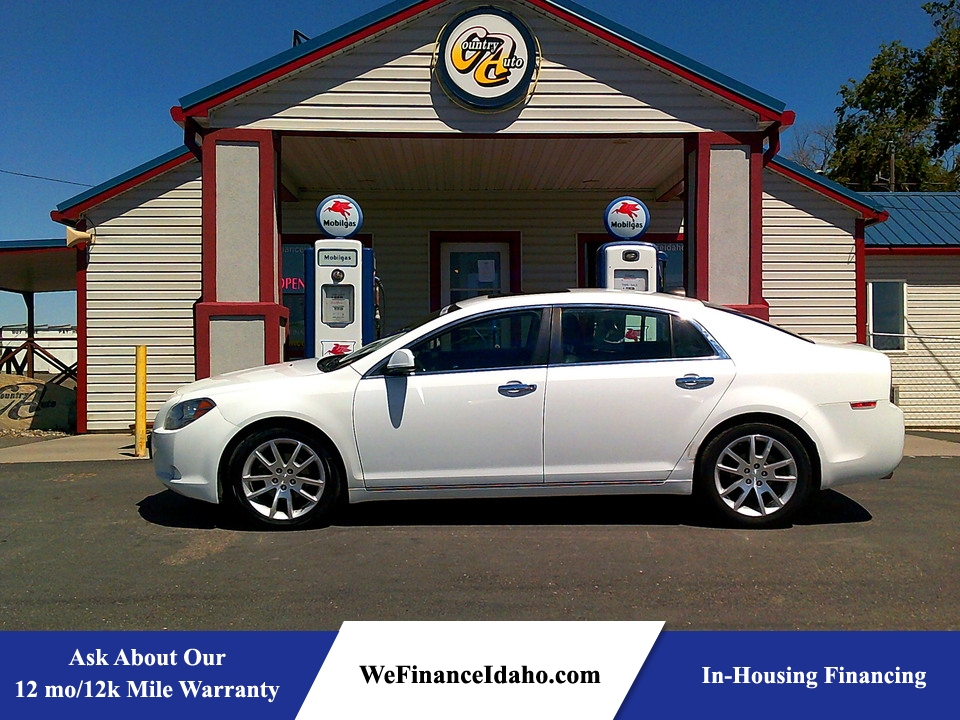 Considering the number of superior midsize sedans on the market and the fact that an all-new Malibu is just around the corner, the 2012 Chevrolet Malibu is hard to recommend.

With an all-new 2013 model waiting in the wings, the 2012 Chevy Malibu gets only minor changes including a few new options packages.

Like the fleeting careers of many celebrities who call Malibu (the place) home, the story of the 2012 Chevrolet Malibu (the car) is a lesson in just how fast things can change. It was just four years ago that this then-new seventh-generation midsize sedan took home the prestigious North American Car of the Year award. And while the Malibu is still a fine car, the landscape in the midsize sedan category has changed so dramatically in recent years that this one-time media darling no longer quite measures up to the competition.

To its credit, the Malibu still has some strengths, including attractive styling, nicely balanced ride and handling qualities and quick acceleration with the V6 engine. But these merits are overshadowed by a cramped rear seat, the use of some subpar quality interior materials and the lack of popular convenience and safety features available on competitive models.

Most of all, however, the Malibu has been bettered by an onslaught of competitor models. The sleek Hyundai Sonata and related Kia Optima offer excellent engines, attractive style and loads of value for the money. The Volkswagen Passat is now cheaper and larger than before, while the highly regarded Ford Fusion and sporty Nissan Altima are both very strong contenders. Complicating matters further is the fact that an all-new eighth-generation Malibu will debut as a 2013 model in the early months of 2012, and it looks very impressive. Put all this together and we have a hard time recommending the 2012 Chevrolet Malibu.

The 2012 Chevrolet Malibu is offered in three basic trim levels -- LS, LT and LTZ -- that are then broken down into several sub-models.

The next step up is the LT, which is subdivided into 1LT, 2LT and 3LT models. High points here include 17-inch alloy wheels, body-color outside mirrors and side moldings, steering-wheel-mounted audio controls and a USB audio jack. The 2LT and 3LT come with all that plus upgraded upholstery, remote ignition, additional power driver seat adjustments, heated front seats, Bluetooth and a rear-seat 110-volt household-style AC power outlet.

Spring for the range-topping LTZ and you'll get 18-inch alloy wheels, foglamps, heated outside mirrors, a sunroof, LED taillights, automatic climate control, leather upholstery, upgraded instruments, an auto-dimming rearview mirror and an eight-speaker Bose audio system. Many of these features are also grouped into options packages that can be added to the lower trim levels. In addition, a sunroof is available on all models except the LS.

The standard engine for the 2012 Malibu is a 2.4-liter four-cylinder that puts out 169 horsepower and 160 pound-feet of torque. Power is sent to the front wheels via a six-speed automatic transmission with manual shift control. Estimated fuel economy for this powertrain is 22 mpg city/33 mpg highway and 26 mpg combined. In Edmunds performance testing, a four-cylinder Malibu reached 60 mph in 9.1 seconds, which is about average for four-cylinder-powered sedans in this class.

A 3.6-liter V6 good for 252 hp and 251 lb-ft of torque is available on LT and LTZ models. The six-speed automatic is standard here as well. Fuel economy is estimated at 17/26/20 mpg. Our test of a V6-equipped Malibu resulted in a 0-60-mph sprint in just 6.7 seconds, making it one of the quicker V6 sedans in its category.

In government crash testing the Malibu earned an overall rating of four stars out of a possible five, with four stars for overall frontal crash protection and five stars for overall side impact protection. The Insurance Institute for Highway Safety awarded the Malibu its highest rating of "Good" in its frontal-offset and side-impact testing. In Edmunds brake testing, a V6 Malibu impressed us by stopping from 60 mph in a short, fade-free 122 feet.

While the interior of the 2012 Chevrolet Malibu looks good, the overall effect is cheapened somewhat by the use of low-quality materials in a few places. The layout of gauges and controls is refreshingly simple, however, and the use of acoustic insulation gives the space a pleasant hush.

Up front, the seats are both comfortable and supportive, though wider folks may find the pronounced side bolsters make it hard to get settled. The rear seat is passable for a couple of adults, but it's a snug fit for three people or even a pair of larger folks compared to some other midsize sedans.

Out back, the trunk offers a healthy 15.1 cubic feet of cargo room that's made more flexible by the 60/40-split-folding rear seatbacks. That said, the space here is shallow and the opening is on the small side, making loading and unloading larger objects a bit challenging.

Behind the wheel, the 2012 Chevrolet Malibu impresses with its smooth, quiet ride and confident handling. Steering feel is generally good for a mainstream sedan, though several of our editors actually preferred the electric-assisted power steering used to help boost fuel efficiency in four-cylinder models to the more conventional hydraulic steering assist that comes with the V6 engine.

Which powertrain is right for you depends on your driving style and expectations, but most buyers should be happy with the combination of the four-cylinder engine and six-speed automatic transmission. Not surprisingly, the V6 is a better choice for those looking for stronger acceleration, provided they can live with the significantly lower fuel economy that comes with it.