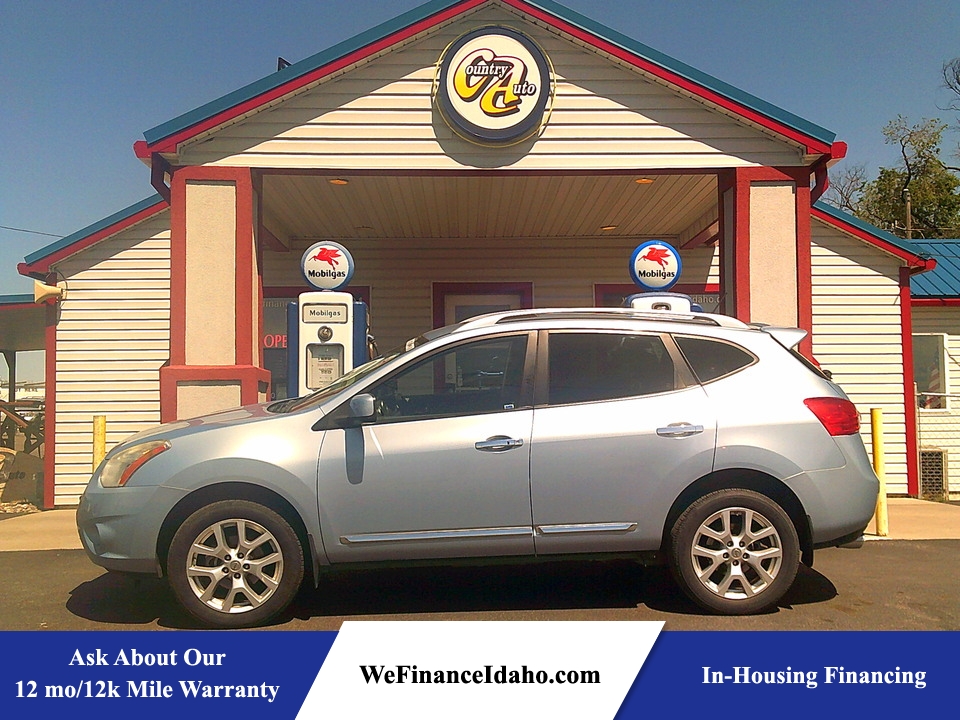 The 2011 Nissan Rogue is a comfortable, fun-to-drive compact crossover with an unusually nice interior. It's a strong contender unless you require maximum cargo space and rear-seat functionality.

For 2011, the Nissan Rogue gets a refresh that includes revised front and rear styling, newly available luxury features, slightly improved fuel economy and a shuffling of trim levels.

At a glance, one may confuse the 2011 Nissan Rogue for its bigger and fancier brother, the Nissan Murano. And with this year's mild refresh bringing a slightly more upscale look to the compact crossover SUV, we're sure the closer resemblance is intentional. Yet the Rogue is based on a more humble Nissan product, the plebeian Sentra sedan. But before you write off the Rogue as a sheep in wolf's clothing, take one for a test-drive and you'll likely be impressed with its sporty demeanor.

This year's refresh brings updated styling thanks to a new grille, bumpers, standard front and rear spoilers and additional chrome trim (most notably along the lower body sides). The cabin gets updated instruments along with a new color display for the audio system (on upper trims). A number of high-end features debut this year as well, including 18-inch alloy wheels, a navigation system, iPod integration, automatic climate control and auto on/off headlights. Fuel mileage improves slightly thanks to lower-rolling-resistance tires and an underbody panel that improves aerodynamics. Lastly, trim levels and packages have been revised.

Thanks to its stylish sheet metal and agile road manners, the Rogue isn't like most compact crossovers. The steering is light during low-speed maneuvers, yet weights up reassuringly at speed. And the suspension takes bumps in stride while also providing a reassuringly stable attitude through the corners. Unlike most rivals, the Rogue features high-quality, soft-touch dashboard materials that contribute to the relatively upscale feel of the cabin.

The Rogue does have a few weak points, however. Though its performance is more than competitive among its four-cylinder peers, the mandatory continuously variable transmission (CVT) causes the engine to drone under hard acceleration. Unlike many of its chief competitors, the Rogue doesn't offer a V6 option, which may concern those who live in mountainous regions or who plan on towing with their small crossover. Within the cabin, the rear seat doesn't offer the slide and recline features that some rivals do. And you'll pay for the swoopy, Murano-inspired styling with compromised rearward visibility and a smallish maximum cargo capacity.

Nonetheless, the 2011 Nissan Rogue still deserves a seat at the table with the perennial segment leaders, the 2011 Honda CR-V and 2011 Toyota RAV4. The Honda and Toyota offer more cargo room and versatility, but the Rogue has a nicer interior, more appealing driving dynamics and arguably more attractive styling. The Rogue's chief competitors are the 2011 Hyundai Tucson, 2011 Kia Sportage and 2011 Mazda CX-7, which similarly offer a sporty drive and styling at the expense of greater practicality. You'll likely want to look at all these models, but for a crossover with a high degree of carlike agility the Rogue is certainly a solid pick.

The SV also qualifies for a couple of available packages. The Premium package bundles together a sunroof, a navigation system with real-time traffic, automatic climate control and auto on/off headlights. The SL package includes the equipment from the Premium package and adds 18-inch alloy wheels, xenon headlights, foglights, heated side mirrors, leather upholstery, heated front seats, an auto-dimming rearview mirror and a premium Bose audio system with a subwoofer.

The 2011 Nissan Rogue is available with either front- or all-wheel drive. It's powered by a 2.5-liter four-cylinder engine that produces 170 horsepower and 175 pound-feet of torque and employs a CVT. In Edmunds testing, a front-drive Rogue took just 8.6 seconds to reach 60 mph, which is quick for a four-cylinder compact crossover.

Fuel economy is similar to most of the competition. The front-wheel-drive Rogue has EPA estimates of 22 mpg city/28 mpg highway while the AWD variant drops slightly to 22/26 mpg.

The 2011 Nissan Rogue boasts one of the nicest interiors of any compact crossover at its price point. The seats are comfortable front and rear, the controls are intuitive and the materials are top-notch. Storage compartments are in relatively short supply, but the Rogue makes up for it with a substantial center console bin, a massive glovebox and a clever under-floor organizer.

Unlike the rear seats of competing crossovers, however, the Rogue's don't recline or slide fore and aft. There is also no rear center armrest. With the rear seatbacks upright, storage stands at 28.9 cubic feet, an average figure for this class. With the seatbacks folded, cargo space jumps to 57.9 cubes, but that's significantly less than the competition offers.

Small crossovers are supposed to drive like cars, and the 2011 Nissan Rogue does them one better -- it drives like a car with great handling. Road bumps and imperfections are gobbled up with ease, highway stability is exemplary and handling is aided by good body control and precise, well-weighted steering. Power from the four-cylinder is ample, but the CVT can be annoying due to the constant engine drone it produces at full throttle.