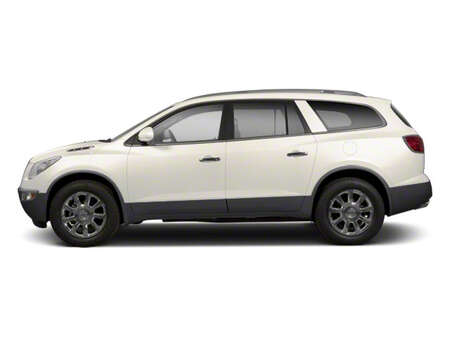 The three-row 2011 Buick Enclave crossover SUV is an excellent choice for families who want minivan functionality along with classy styling and a luxurious interior.

For 2011, the Buick Enclave sees only very minor changes. Its 2-Way Advanced Remote Start feature has been deleted as an option, and a six-month subscription to OnStar's Directions and Connections joins the standard features list.

Sleek design inside and out; smooth and quiet ride; all three rows are spacious; ample cargo space; top crash-test scores.

Despite remaining mostly unchanged in its four years on the market, Buick's full-size three-row crossover continues to be a very appealing choice in a very competitive segment. The 2011 Buick Enclave is essentially the same vehicle we saw last year -- and we're fine with that. Although it shares its platform (dubbed "Lambda") with a pair of GM cousins known as the Chevrolet Traverse and GMC Acadia, the Buick Enclave sports its own identity. That is, it offers a luxurious, stylish and upscale take on the family-friendly crossover.

Among the Buick Enclave's many strengths are its powerful V6, comfortable and quiet ride, massive cargo capacity and excellent crash-test scores. Buyers can choose between a seven- or eight-passenger setup within the handsome, well-appointed cabin. The former features a pair of captain's chairs in the second row while the latter features a three-passenger bench. These amenities are beautifully housed within the Enclave's attractive, curvaceous sheet metal.

Despite its ample measure of functionality, it's true that the 2011 Buick Enclave still can't match a minivan when it comes to practicality; the Enclave offers less cargo space, and its lack of sliding doors makes it more difficult to load rear passengers. In its favor, though, is its sheet metal: This Buick is a lot more stylish than any minivan.

Indeed, lined up against premium-branded rivals like the 2011 Acura MDX and 2011 Lexus RX 350, the Buick Enclave still looks good in terms of performance, luxury features and style. Some of the buyers who patronize other premium brands might sniff at the Buick's hard-to-shake old-man image and sometimes inconsistent cabin materials. More mainstream shoppers might consider the 2011 Ford Flex, 2011 Hyundai Veracruz and 2011 Mazda CX-9, all of which have their own strengths. Overall, though, the Buick Enclave stands as a solid choice for families looking for space, style and luxury at a price that won't break the bank.

The 2011 Buick Enclave is a large crossover SUV that comes in CX, CXL1 and CXL2 trim levels. All have a standard seven-passenger seating configuration via second-row captain's chairs and a third-row bench seat. An optional second-row bench seat, available at no extra charge, increases capacity to eight.

Even the base CX is nicely equipped out of the box with 19-inch alloy wheels, bi-xenon headlights, foglamps, a power liftgate, heated outside mirrors, an auto-dimming rearview mirror and cloth upholstery. Other standard features include partial power front seats, a tilt-and-telescoping leather/wood steering wheel, tri-zone automatic climate control, Bluetooth, OnStar and a six-speaker CD/MP3 audio system with an auxiliary audio jack and satellite radio.

On the CX, you can add the Bose stereo, back-up camera and rear parking sensors as options. For the CXL trims, you can additionally add a rear-seat entertainment system and a navigation system (with back-up camera display). Other Enclave options include a dual-pane "SkyScape" sunroof (not available on CX), a second-row storage console with a 12-volt power outlet (also not available on CX) and towing preparation.

The 2011 Buick Enclave offers a choice of front-wheel drive or all-wheel drive. Either way, the power plant is a 3.6-liter V6 that pumps out 288 horsepower and 270 pound-feet of torque. A six-speed automatic transmission is standard.

EPA fuel economy estimates stand at 17 mpg city/24 mpg highway and 19 mpg combined for front-wheel-drive models, while all-wheel-drive versions rate 16/22/18. With the optional trailering package, the Enclave can tow up to 4,500 pounds.

Stability control, front-seat side airbags and full-length side curtain airbags are standard on every 2011 Buick Enclave. In brake testing, the Enclave came to a stop from 60 mph in 139 feet. This is a somewhat long stopping distance for this segment, and both the Ford Flex and Mazda CX-9 perform better.

In the government's new, more strenuous crash testing for 2011, the Enclave earned a top five-star rating for overall performance, with four out of five stars given for front-impact protection and five stars for side-impact protection. In Insurance Institute for Highway Safety testing, the Enclave earned the best score of "Good" in frontal-offset and side-impact crash tests.

The Enclave's cabin has an upscale vibe thanks to its stylish dash and wood-grain inlays. There's chrome trim everywhere, though, which means blinding reflections when the sun is at certain angles. Two other downsides include small and indistinct buttons for the audio and climate controls, and outward visibility that's more compromised than that of competing vehicles.

On the bright side, the Enclave is one of the roomiest crossover SUVs on the market. There are 19 cubic feet of usable space behind the third-row seat, 68 cubic feet with the third row's 60/40 sections folded into the floor and an enormous (though not quite minivan-grade) 116 cubic feet with the second row folded. Third-row access is facilitated by a tilt-and-slide function for the second-row seats; however, some agility is still required to get back there, and the Enclave's third row is more claustrophobic than the Ford Flex's.

"Carlike" is a term often applied to crossover SUVs. It doesn't quite apply to the gargantuan 2011 Buick Enclave, which tips the scales at close to 5,000 pounds with all-wheel drive; indeed, we've noted that the Enclave feels bigger and more ponderous on the road than some rival crossovers.

Nonetheless, the Enclave's 3.6-liter V6 is plenty powerful in most situations, and while the handling is neither lively nor inspiring, it's stable and secure. The 2011 Buick Enclave also shines on road trips thanks to its quiet ride and compliant suspension.