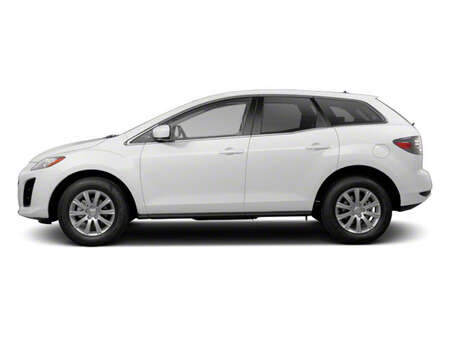 Thanks to a sharp design and peppy powertrain, the 2010 Mazda CX-7 brings some much-needed fun to an otherwise practical but mostly bland segment.

For 2010, the Mazda CX-7 gets a refresh that brings a new SV trim level, a new base engine, higher fuel economy for the turbocharged engine, a revamped interior and a new face that shows off Mazda's bigger, happier grille.

As the car company that produces such four-wheeled fun as the Mazdaspeed 3, Miata and RX-8, Mazda tries to infuse every vehicle it makes with a sporty personality. Peppy acceleration, precise handling and a feeling that you're confidently connected to the road are hallmarks of the brand. And with the 2010 Mazda CX-7 small crossover SUV, it's no different. With its sleek lines, pumped-up wheel-opening flares and tapered roof line, the CX-7 certainly looks like it belongs to a sports car family.

The CX-7 debuted back in 2007 and this year it receives its first batch of significant updates. For 2010, in addition to updated front and rear styling and some shuffling of the standard and optional features, the CX-7 gets a new "SV" base trim level as well as a new 2.5-liter, naturally aspirated four-cylinder engine that develops 161 horsepower. The turbocharged 244-hp 2.3-liter engine is still available, and this year Mazda raised the turbo engine's fuel economy a bit by making a few engineering tweaks.

Alas, none of these changes address one of the CX-7's more notable drawbacks -- cargo capacity and rear passenger room. Compared to segment leaders like the Honda CR-V, Toyota RAV4 and the redesigned Chevrolet Equinox, the Mazda simply can't carry as much, and it isn't as comfortable for people sitting in back. But none of these vehicles approaches the Mazda in terms of athleticism.

For something similarly sporty, you might want to check out the Acura RDX, Mitsubishi Outlander, Subaru Forester XT and VW Tiguan. The turbocharged Acura is more upscale but it's also more expensive. The Outlander offers greater utility, but can't match the Mazda when it comes to styling and build quality. Subaru's Forester is also available with a turbocharged engine, and it edges out the CX-7 when it comes to legroom and cargo capacity, but it's not as sporty as it once was. Volkswagen's Tiguan, meanwhile, has sharp handling but comes up short in terms of power and value.

There is a lot to choose from in the small crossover segment, and the decision process can get overwhelming. But we think the updated 2010 Mazda CX-7 remains a very good choice for those who need the practicality of a five-passenger crossover and want the sporty looks and performance that are the brand's trump cards.

Many of the upper trims' features can be had on the lower trims via several option packages.

The i SV and i Sport models come with a 2.5-liter inline-4 making 161 hp and 161 pound-feet of torque. It's paired to a five-speed automatic transmission with manual shift control. The s Touring and s Grand Touring come with a turbocharged 2.3-liter four-cylinder boasting 244 hp and 258 lb-ft that's paired with a six-speed automatic transmission (also with manual shift control).

Despite the fact that a loaded s Grand Touring AWD model weighs in at nearly 2 tons, this CX-7's performance is still relatively brisk -- acceleration from zero to 60 mph takes just 7.7 seconds. Fuel economy estimates from the EPA for the new 2.5-liter engine are 20 mpg city/28 mpg highway and 23 mpg combined for a FWD model. This year's turbo CX-7 is a little better than last year at 17/23/19 mpg with AWD, but it's still one of the thirstier small SUVs out there.

Antilock disc brakes, stability control, front-seat side airbags and side curtain airbags come standard on all trim levels. In crash testing by the National Highway Traffic Safety Administration, the 2010 Mazda CX-7 did great, garnering a top five-star rating in both front and side collisions. Similarly, the Insurance Institute for Highway Safety awarded the CX-7 its highest rating of "Good" for both frontal-offset and side-impact crashworthiness. In our own braking testing, the CX-7 s performed excellently for a compact crossover, with fade-free stops from 60 mph in just 113 feet.

The CX-7's sporty styling carries over to the inside, where the edgy yet functional cabin provides a more visually stimulating environment than one might expect from a crossover SUV. A sporty three-spoke steering wheel is reminiscent of the one found in the Miata, while the gauge cluster is similar to the RX-8's. Build quality and ergonomics are both very good, although some might find the location of the radio and climate displays unintuitive, since their locations atop the dash are separated from their respective controls.

Ample hip- and headroom keep CX-7 passengers comfortable, even with all five seats occupied. However, rear legroom doesn't measure up to that of chief competitors -- especially the Forester. There are about 30 cubic feet of cargo space behind the second-row seat. Maximum capacity stands at about 59 cubes -- more than 10 cubes fewer than the class-leading RAV4, Forester and CR-V.

When it comes to handling and braking performance, the 2010 Mazda CX-7 lives up to Mazda's sporty reputation. The steering is nicely weighted, and the effort increases in direct proportion to cornering forces. This crossover SUV feels stable in turns and changes direction quickly. The CX-7 rides a bit firmer than most competitors, but that's a livable trade-off for such performance. The base engine should be merely adequate, while the turbocharged engine is much more spirited. The latter, however, suffers from some turbo lag, which can make the power delivery feel somewhat abrupt to those used to cruising around in V6-powered crossovers.