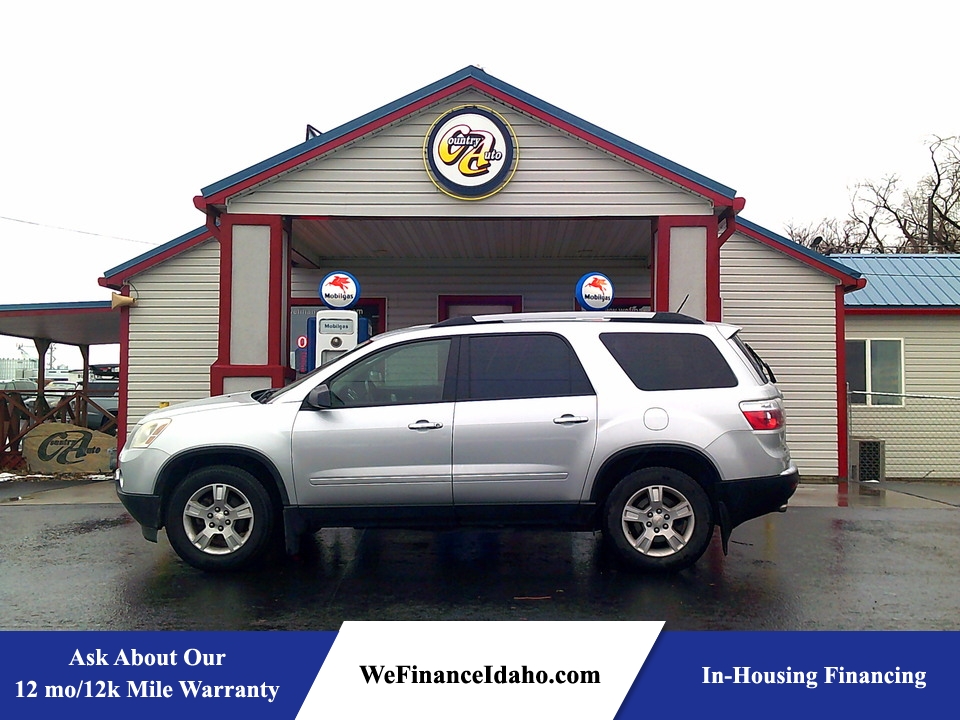 Like its platform-mates from Buick, Chevy and Saturn, the three-row 2010 GMC Acadia offers an enviable combination of comfort and cargo space, with decent performance to boot.

The 2010 GMC Acadia gets new "Cashmere" leather upholstery on upscale models, slightly revised trim levels, standard 20-inch wheels on the top-of-the-line model and a USB jack for the optional Bose stereo. The six-speed transmission has also been reprogrammed for quicker downshifts.

As one of four siblings, the 2010 GMC Acadia has its work cut out for it in standing out from the rest of the family. But the Acadia does have some attractive qualities relative to its platform-mates, even though we're not convinced that GM really needs to make four different versions of its large crossover SUV. The Acadia is less luxurious than the Buick Enclave, but it's cheaper, too, and its interior is nicer than the Chevy Traverse and Saturn Outlook.

In any case, the Acadia is every bit as capable as the others, which means it's one of the top choices among three-row large crossover SUVs. Blessed with unibody architecture as opposed to heavier and less carlike body-on-frame construction, the Acadia boasts superior handling, interior packaging and crashworthiness relative to traditional full-size SUVs. GMC's big crossover also offers a smooth and powerful direct-injected V6 engine and it's available with either front- or all-wheel drive. Its smooth ride is a boon for road-tripping families, as is its available rear-seat entertainment system. And unless you want a minivan, a Suburban is pretty much the only vehicle that can top the Acadia's whopping 117 cubic feet of maximum cargo space.

Like any vehicle, the 2010 GMC Acadia has its share of drawbacks. First of all, while the interior is attractively designed, its materials leave something to be desired. Also, the third row isn't as comfortable as that of the Ford Flex (an issue endemic to GM's crossover-SUV quartet), nor is its outward visibility as good as the Flex's. Lastly, some of our editors have panned the Acadia for feeling a bit ponderous on the road relative to nimbler (but smaller) rivals.

There are lots of crossover flavors available, though, so make sure you sample some others, too. The Flex, Hyundai Veracruz and Mazda CX-9 are all worth test-driving, and if you're open to the idea of a minivan, Honda's Odyssey is the best of its breed. Don't forget about the Acadia's GM siblings, too: They're similar enough that superior incentives could be the deciding factor. Overall, though, the 2010 GMC Acadia's strengths greatly outweigh its weaknesses, and it certainly belongs on your short list of large crossover SUVs.

The 2010 GMC Acadia is a large crossover SUV offered in four trims: base SL, SLE, SLT-1 and SLT-2. Seven-passenger seating is the default configuration, while eight-passenger seating (substituting a fold-flat second-row bench for the standard fold-flat captain's chairs) is optional on all but the SL.

The options list is headed by a rear entertainment system (SL excluded), which includes a rear-seat DVD player with a flip-down display, a 115-volt power outlet, a surround-sound version of the Bose stereo and -- for the SLE -- rear audio controls and tri-zone automatic climate control. The SLT-1 and SLT-2 get an even fancier entertainment package that throws in a navigation system (unavailable on SL and SLE). Additional options, depending on the trim level, include a second-row center console, a dual-pane "SkyScape" sunroof, heated and cooled front seats and a Technology package with a head-up display and xenon headlamps.

The 2010 GMC Acadia is available with either front-wheel or all-wheel drive. Power comes from a 3.6-liter V6 that cranks out 288 horsepower and 270 pound-feet of torque. A six-speed automatic transmission is standard, and it's been updated for 2010 with noticeably more responsive downshifts. The front-drive Acadia is EPA-rated at 17 mpg city/24 mpg highway and 19 mpg combined, while all-wheel drive lowers those numbers a smidge to 16/23/19. The Acadia's towing capacity is a useful 4,500 pounds when properly equipped.

Standard safety features on the 2010 GMC Acadia include antilock disc brakes, stability control, front-seat side airbags and full-length side curtain airbags. In crash tests, the Acadia ran the table, scoring a perfect five stars in government frontal- and side-impact testing as well as the top "Good" rating in the Insurance Institute of Highway Safety's frontal-offset and side-impact testing.

The Acadia's attractive dashboard layout features sensible controls and decent build quality, though signs of lower-grade plastics and questionable assembly can be found. A third-row seat is standard along with second-row captain's chairs, all of which fold flat. The optional 60/40-split second-row bench expands seating capacity to eight. Access to the third row is facilitated by the wide rear doors and a sliding second-row seat. Overall third-row roominess is pretty good as large SUVs go, though the Ford Flex does hold an edge on comfort for two adult passengers.

Maximum cargo capacity in the Acadia is an enormous 117 cubic feet available with all seats down -- not quite minivan-grade, but more than enough for most consumers. There's a respectable 24 cubic feet behind the third-row seat alone, so many hauling duties can be handled without folding any of the seats.

The 2010 GMC Acadia is pleasant enough to drive, but it feels big -- and it is big, with a curb weight not too far south of 5,000 pounds. However, most people will probably forgive the Acadia's somewhat ponderous handling given its capacious interior. The optional 19- and 20-inch wheels look great (well, except for the chrome ones), but they hurt the Acadia's otherwise comfortable ride. We have no complaints about the smooth and powerful 3.6-liter V6.