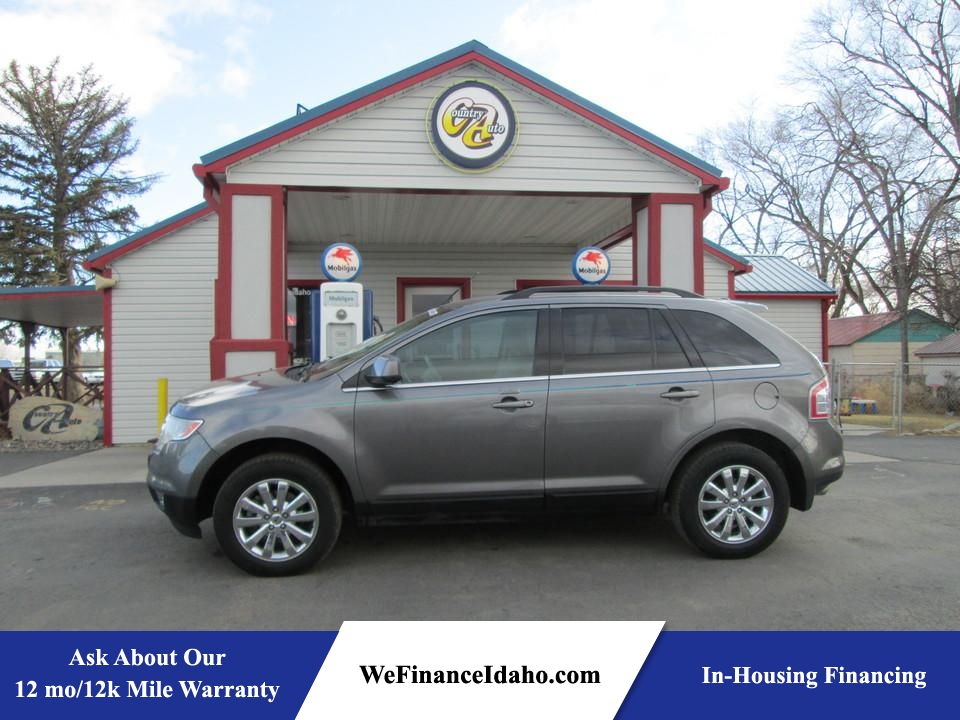 The 2010 Ford Edge is a solid entry in the midsize crossover SUV category, but it wouldn't be our first choice.

There are only minor appearance and trim changes for the 2010 Ford Edge.

The 2010 Ford Edge is like the poor guy waiting at a busy restaurant, watching anxiously as party after party gets seated before him. "It'll only be a few more minutes," says the hostess, but "a few" keeps changing to mean 30 or 40. Well, the Edge has been standing idly by for the past couple years as many of its Ford siblings have received a slew of much-needed updates and upgrades. The Edge's name can't be called soon enough, because a few tweaks here and there could dramatically improve this midsize crossover SUV's standing in an increasingly competitive segment.

The Edge at least starts with a solid foundation. It has ample room for five passengers, plus a cabin that is class-leading in terms of comfort and noise isolation. Its chassis is stout, providing an agreeable balance between ride and handling. It can also be packed with an abundance of standard and optional equipment, including Ford's latest Sync and Sirius Travel Link technologies, which aren't offered by other manufacturers.

As such, the 2010 Edge wouldn't be a bad choice, but as mentioned before, there are some issues that should be addressed. First of all, we've found the brakes to be lacking in our tests, as stopping distances are mediocre at best and worse than the bigger, heavier Ford Flex. Second, the interior is lackluster, suffering from some low-quality materials and Ford's antiquated stereo/climate controls that have been exorcised from recently updated models. Finally, the transmission lacks responsiveness, and some sort of manual override would be appreciated.

The 2010 Ford Edge has a lot of potential. Until some of its shortcomings are rectified, though, we think five-passenger competitors like the Nissan Murano and Toyota Venza are better choices. Seven-passenger entries like the Chevrolet Traverse, Ford Flex, Hyundai Veracruz and Mazda CX-9 are also worth considering given their similar fuel economy, performance and price. So Mr. Edge, please have a seat; your table will be ready in just a few more minutes.

The 2010 Ford Edge is powered by a 3.5-liter V6 that produces 265 horsepower and 250 pound-feet of torque. A six-speed automatic transmission is standard. All trim levels come standard with front-wheel drive, and all but the SE can be equipped with all-wheel drive. With the latter, power flows to the front wheels until wheel slippage occurs, in which case power is sent to the wheels with optimum traction. In performance testing, a front-drive Edge went from zero to 60 mph in an unremarkable 8.1 seconds. When properly equipped, the Edge can tow 3,500 pounds.

Antilock disc brakes, stability control (with rollover avoidance logic), front-seat side airbags, full-length side curtain airbags and blind spot mirrors are all standard. In government crash tests, the 2010 Ford Edge scored five stars (out of five) for the driver and four stars for the passenger in frontal impact tests, while it earned five stars in side impact testing for both front and rear passengers. In Insurance Institute for Highway Safety crash tests, the Edge scored the highest possible rating of "Good" in both frontal offset and side impact testing.

In the past, the Edge suffered from truly appalling braking distances. A more recent switch in tires improved matters, and the Edge's 60-0 stopping distance is now a tolerable 134 feet. We still noticed significant fade after multiple panic stops, though, which is hardly confidence-inspiring. Opting for the Sport model with its bigger wheels and grippier tires improves these stopping distances, but stiffens the ride in the process.

In contrast to the exterior, the 2010 Edge's cabin is rather ordinary and not smartly designed. The cruise control buttons aren't intuitive, and the center stack air vents don't offer enough range of adjustability. Many interior materials are low quality, and the standard radio faceplate is ugly, placed far away and not particularly up to the task of operating satellite radio and Sync. The excellent optional touchscreen navigation system improves matters, though it still requires an uncomfortable reach.

Certain features like a telescoping steering wheel, numerous storage bins and reclining rear seats help make up for the Edge's shortcomings, and the optional glass Vista Roof imparts an airy feel, though it impinges on rear headroom. Without the power feature, the Edge's rear hatch can be hard for shorter drivers to close, but cargo capacity is a respectable 32 cubic feet with the backseat in use. Folding down the second row opens up a not-so-flat cargo floor and a max capacity of 69 cubes. That's more than a Nissan Murano can manage, but less than the Toyota RAV4 and considerably less than the Ford Flex.

The 2010 Ford Edge is most notable for its comfortable ride, which sops up road irregularities well without feeling floaty in the process. Though its steering doesn't provide much road feel, the Edge feels solid and provides commendable handling that instills confidence.

Acceleration from the standard V6 is strong, but the six-speed automatic transmission it's attached to can be painfully slow to downshift, often requiring a full foot-to-the-floor pedal stomp to coax it into providing a lower gear. Unfortunately, there is no manual override -- simply an "L" gear that drops the transmission into an inappropriately low gear. The brakes are another issue, with longish stopping distances and a mushy pedal feel.