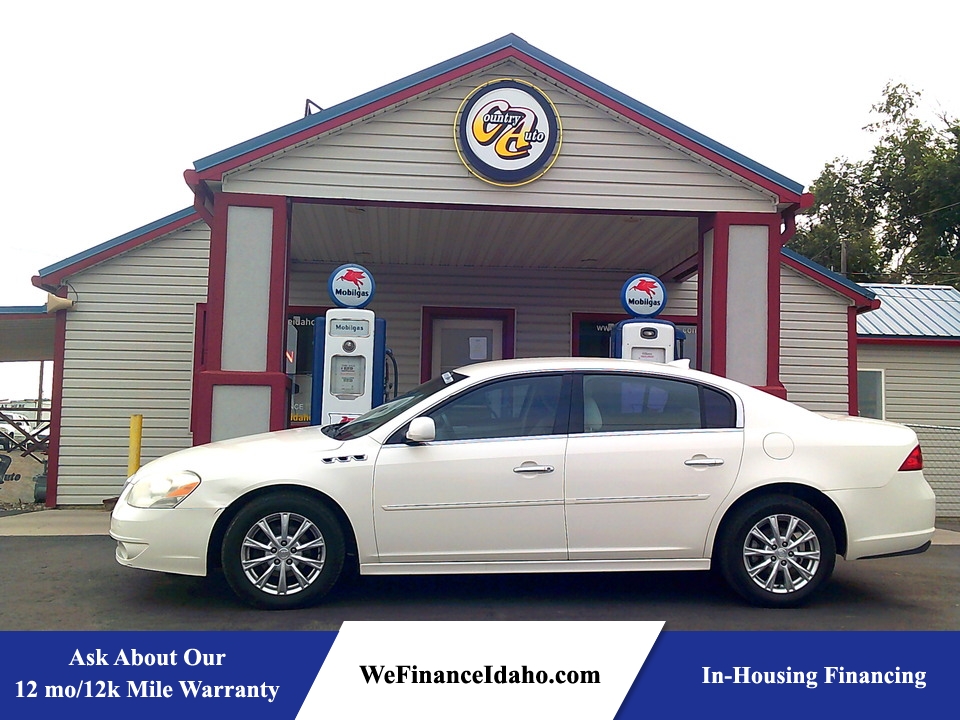 While the 2010 Buick Lucerne looks good and offers the cushy ride quality of a traditional American full-size luxury sedan, many of its competitors offer better performance, amenities and safety features.

The 2010 Buick Lucerne gets mostly cosmetic changes, including new foglight and rocker panel designs, backlit gauges, and a new 18-inch chrome alloy wheel option on Super models. Bluetooth is also now offered as an option on the entry-level CX model.

Just as the clothes don't make the man, so the stylish sheet metal surrounding the 2010 Buick Lucerne doesn't make it a thoroughly modern automobile. You see, once you get past its crisp design, you'll realize that the full-size Lucerne is an old-school American luxury sedan through and through. Whether that's a good thing or not depends on your perspective.

If you're a fan of vintage Buick models like the Electra and Roadmaster, the Lucerne will likely appeal. If, on the other hand, you're simply looking for the best full-size sedan on the market today, well, you're liable to find the Lucerne lacking. For starters, the Lucerne's powertrains don't quite measure up to those of its competitors. Both the V6 and V8 engines are a little anemic by comparison and hampered by an outdated four-speed automatic transmission that detracts from both overall performance and fuel economy.

To its credit, the Lucerne does ride quite comfortably, and its cabin is hushed at highway speeds. But that's about where this Buick runs out of charm. Take into account the imprecise steering, a huge turning circle and inexcusably poor braking performance and you have a car that doesn't inspire much confidence behind the wheel.

With all that in mind, it should come as no surprise that we suggest test-driving Buick's four-door flagship back to back with other large sedans, including the Chrysler 300, Ford Taurus, Hyundai Genesis and Toyota Avalon. Buick's new LaCrosse is another highly regarded model to consider. All of these models will offer more sprightly performance, better fuel economy and a more refined overall demeanor. While we're sure that there are a few buyers for whom the 2010 Buick Lucerne will be a good fit, just be certain that you try a few other models on for size before making up your mind.

The 2010 Buick Lucerne is a full-size luxury sedan that's offered in three basic trim levels: CX, CXL and Super. However, the CX and CXL models are broken down into multiple variations.

There are no fewer than five different CXL variants, ranging from CXL1 to CXL5. The CXL1 gains leather upholstery, heated front seats, driver memory settings and a power front passenger seat. Moving up through the CXL ranks will get you a few extra niceties such as perforated leather upholstery, a heated leather- and wood-trimmed steering wheel, ventilated front seats, a nine-speaker Harman Kardon audio system and lane-departure and blind-zone alert systems.

Step up to the top-of-the-line Super model and you'll get several performance-oriented upgrades including a V8 engine, the Magnetic Ride Control adaptive suspension and 18-inch alloy wheels. Inside are a few more luxury touches including suede-trimmed perforated leather upholstery, a power tilt-and-telescoping steering wheel, an auto- dimming rearview mirror with a compass and the Harmon Kardon audio system with a six-CD changer.

The options list varies by trim level and includes a sunroof, the lane-departure and blind-zone warning systems, a navigation system with real-time traffic updates and the upgraded audio system with a CD changer. CX and CXL models can also be had with a front bench seat that bumps seating capacity to six people.

The 2010 Buick Lucerne is offered with two different powertrains. CX and CXL models get a 3.9-liter V6 that makes 227 horsepower and 237 pound-feet of torque. The top-of-the-line Super features a 4.6-liter V8 that puts out 292 hp and 288 lb-ft. Both engines send their power to the front wheels via a four-speed automatic transmission. In acceleration testing, a Lucerne Super took 7.7 seconds to reach 60 mph; most competing sedans offer better performance.

Standard safety features across the 2010 Buick Lucerne lineup include antilock disc brakes, traction control, side impact airbags for front-seat passengers and full-length side curtain airbags. While electronic stability control and brake assist are standard on upper CX and CXL variants and the Super model, these features are an extra-cost option on the entry-level CX and CXL trims and the CXL Special Edition.

In government crash tests, the Lucerne earned a five-star rating (out of five) in frontal collisions and four stars for side impacts. The Insurance Institute for Highway Safety rated the Lucerne "Good" (the highest of four) in frontal-offset crash tests and "Acceptable" (the second highest) in the side-impact test. In Edmunds 60-0-mph brake testing, the Lucerne required a disappointing 137 feet to come to a stop.

Take a seat behind the Lucerne's steering wheel and you'll find an attractive dash layout with easy-to-read gauges and simple, straightforward controls. Large A-pillars at the edges of the windshield create annoying blind spots, however. The leather upholstery on upper trim levels is soft, but a few low-grade plastics and fit-and-finish issues take away from the upscale feel.

Head off down the road and you'll discover the cabin is a quiet place, all the better to enjoy the optional 280-watt Harman Kardon audio system. Seating is comfortable, and the backseat gets high marks for its adult-friendly room. An available front bench seat makes this one of the few sedans on the market that can seat six passengers. Out back, the large trunk offers a healthy 17 cubic feet of cargo room. Unfortunately, the rear seatbacks don't fold down, making carrying longer items a bit of a challenge.

If you seek plush ride quality and a hushed interior, the 2010 Buick Lucerne is bound to satisfy. Even the sportier -- and we use that term very loosely -- Super model is all about coddling its occupants while motoring down the highway. Exit that interstate onto some curvy side roads, however, and the Lucerne doesn't look quite as good. Handling is sloppy on CX and CXL models, and even the Super's adaptive suspension makes only a modest improvement. The steering is slow and imprecise on CX and CXL models and overly sensitive on the Super, thanks to its magnetic variable-assist design. With the V6 under the hood, acceleration is adequate at best. The V8-powered Super is gutsier, particularly at higher speeds, but neither engine's performance impresses compared to competing models.