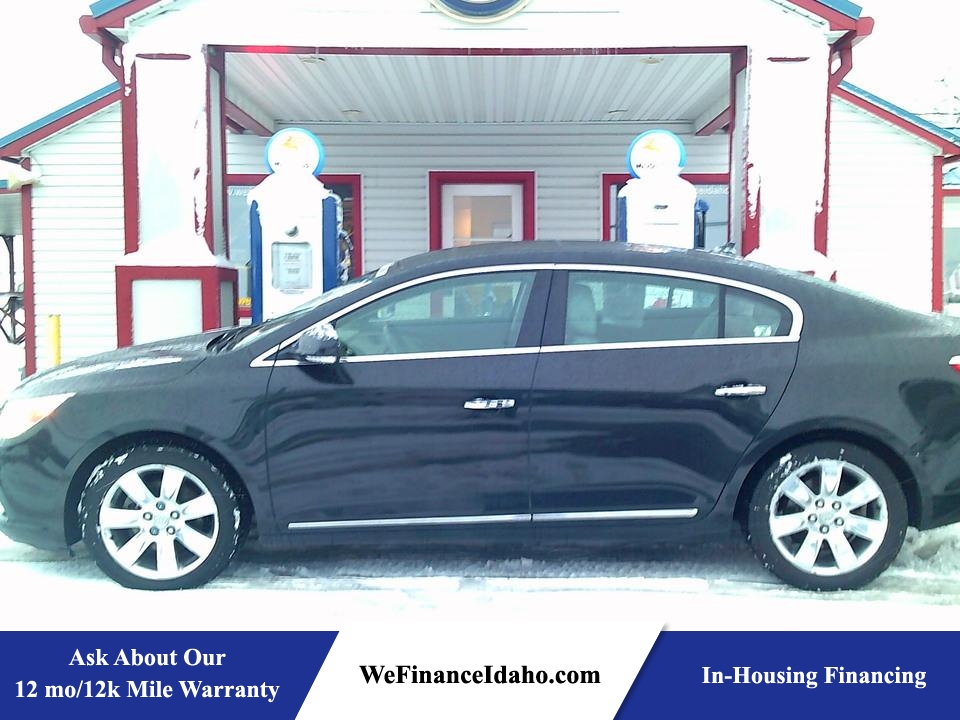 The Buick LaCrosse has been redesigned inside and out for 2010. Highlights include new styling, sharper handling, available all-wheel drive and a revised engine lineup that now includes a fuel-efficient four-cylinder engine.

The 2010 Buick LaCrosse has been reinvented, reshaped and reinvigorated. Gone are the previous generation's ovoid styling cues and bulbous body. The new LaCrosse looks sharper and edgier, and it now sports a truly attractive and modern cabin. Compared to its predecessor, the new LaCrosse is just about the same size aside from a couple extra inches of height, but the vast expanses of new sheet metal give it a much more substantial appearance. It even drives nicely by segment standards. Given the lack of official fanfare accompanying its debut, the 2010 LaCrosse is one of the most pleasantly surprising GM products in recent memory.

Besides the fresh exterior, the new LaCrosse has shed many other demons that plagued its predecessor. Handling is much sharper now -- this LaCrosse is almost engaging and fun. The new midlevel 3.0-liter V6 is far more pleasant than the old LaCrosse's ancient pushrod 3.8-liter V6, and there's also a base four-cylinder (which is frankly a little overmatched considering the LaCrosse's size) and an uplevel 3.6-liter V6. The front seats are comfortable, roomy and supportive, and the rear seats now have an abundance of legroom. Finally, the interior is not just better this time around, it's downright elegant, with materials that look and feel top-notch.

Naturally, it's not all wine and roses for the 2010 LaCrosse. For one thing, the new model's thick roof pillars and unusually tall rear deck lid restrict rear visibility. Note to buyers: You'd be well-advised to spring for the rear parking assist option. Additionally, the previous LaCrosse's available six-passenger seating and V8 engine option are no more, though the capable 3.6-liter V6 does its best to fill the V8's shoes. We're also not impressed by this big Buick's meager 13-cubic-foot trunk, which is more like what you'd expect from a compact sedan.

Overall, though, we've come away impressed by Buick's newest sedan. Previously, the best we could say about the LaCrosse was that golden-agers would likely find comfort in the Buick nameplate and quiet ride. Now, however, the LaCrosse is a fully viable choice for an upscale midsize or large sedan, especially if you're smitten with the car's design. Naturally, you'll still want to check out established models like the Acura TL and Lexus ES 350, as well as new entrants like the Ford Taurus and the Hyundai Genesis. We're not completely convinced that the 2010 Buick LaCrosse can stand out from such stiff competition, but it can certainly run confidently with the pack.

The 2010 Buick LaCrosse is a midsize sedan that is offered in three trim levels: CX, CXL and CXS. The base CX includes 17-inch steel wheels, a power driver seat, a tilt-telescoping steering wheel with audio controls, full power accessories, OnStar and a seven-speaker audio system with a CD/MP3 player, an auxiliary audio jack and satellite radio. Options for the CX include 17-inch alloy wheels and a Comfort and Convenience package that adds dual-zone automatic climate control, an auto-dimming mirror, Bluetooth, driver power lumbar support, a power front passenger seat and remote vehicle start.

The range-topping CXS trim level includes all standard and optional features listed above plus 19-inch alloy wheels. A Touring package is optional for the CXS and includes different 19-inch wheels and adjustable shock absorbers. Other optional CXS extras can also be had on CXL models and include a hard-drive-based navigation system with a rearview camera and a rear-seat entertainment system with dual headrest displays. Also available is a Driver Confidence package that includes blind-spot alerts, adaptive xenon headlights and a head-up display.

Initially, the 2010 Buick LaCrosse CX model will come standard with a 3.0-liter V6 that produces 255 horsepower and 217 pound-feet of torque. Later in the model year, a 182-hp 2.4-liter inline four-cylinder will take over as the standard engine on the front-wheel-drive CX trim level. CXL models will feature the 3.0-liter V6 as the standard engine and will be available in either front- or all-wheel drive -- a plus for those in snowy climates. The CXS is only available in front-wheel drive with a 3.6-liter V6 that churns out 280 hp and 259 lb-ft of torque. All LaCrosse models feature a six-speed automatic transmission.

In our instrumented testing, a LaCrosse with the 3.0-liter engine accelerated from zero to 60 mph in 8.4 seconds -- more than a second slower than the competition, but adequate for most drivers nonetheless. At the time of this writing, official EPA fuel economy figures had not been published for the four-cylinder and 3.6-liter V6 power plants, but Buick estimates 20 mpg city/30 mpg highway for the four and 17 mpg city/27 mpg highway for the big V6. As for the 3.0-liter V6, the EPA rates it at 17 mpg city/26 mpg highway and 20 mpg combined, with AWD cutting 1 mpg from each number.

One of the most striking features of the 2010 Buick LaCrosse is its elegant and contemporary interior, designed in GM's Chinese design studio. The front seats are enveloped by a graceful dashboard arc that stretches from door to door, and the tastefully integrated simulated wood accents contribute to the decidedly upscale feel. At night, passengers are bathed in a soothing blue glow from the ambient lighting with gauge lighting to match. The center stack controls look a bit busy, but operation of the audio, climate control and navigation systems is for the most part simple and intuitive.

Notable among the LaCrosse's many new features is the optional head-up display, which projects pertinent information onto the windshield, allowing drivers to keep their eyes on the road. Despite the more substantial body styling, however, trunk space drops to 13 cubic feet, significantly smaller than the trunks of competing sedans. The trunk is fairly deep, but the lack of height and width may be problematic for bulky items.

From the driver seat, the 2010 Buick LaCrosse exhibits an enjoyable blend of luxury and engagement. The cabin remains blissfully quiet without becoming a sensory deprivation chamber, as there's just enough wind and road noise to remind you that you're not sitting on your couch. Considering all the marshmallowy Buicks of the past, the LaCrosse's handling ability is a surprise -- the car responds confidently to inputs and is certainly more engaging to drive than the Lexus ES 350.

As for power, the base 3.0-liter engine is adequate, but the 3.6 is the more competitive choice. We'd steer clear of the four-cylinder engine -- it does theoretically deliver eco-friendly fuel economy, but real-world gas mileage will likely suffer since the engine must work considerably harder than the V6s to keep up with traffic.

One aspect of the new LaCrosse that we're not fond of is its compromised rear visibility. The short rear window is mounted high on an already tall rear deck lid and flanked on both sides by thick roof pillars. Without the optional back-up camera (which you can only get with the navigation system), drivers will likely feel a twinge of anxiety when backing into a parking spot, even with the audible rear parking sensors (which aren't available on the base CX).