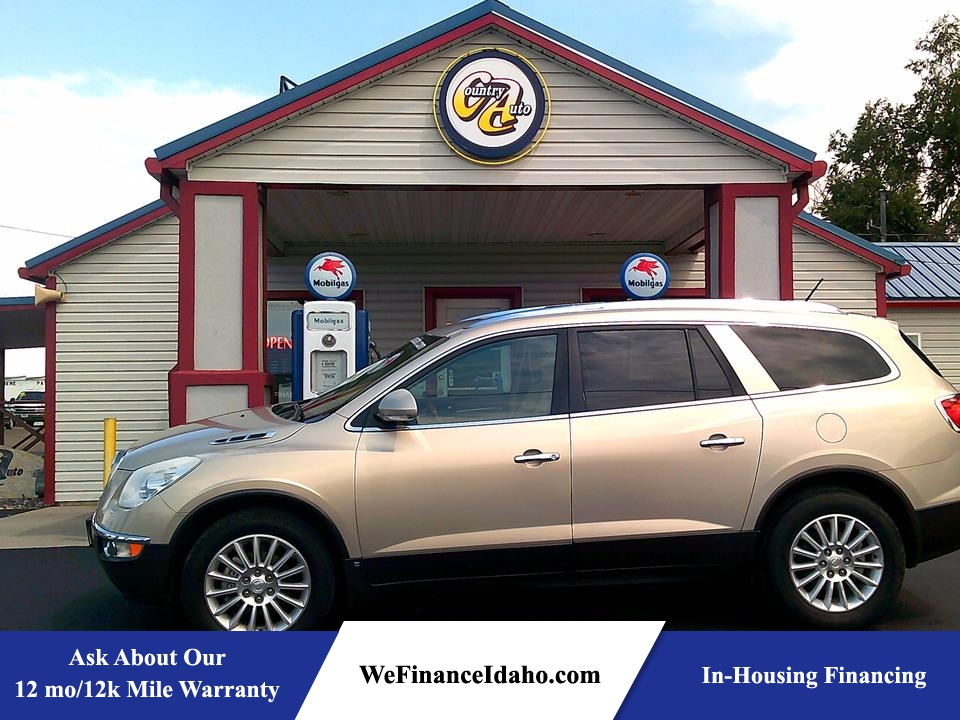 The three-row 2010 Buick Enclave crossover SUV is an excellent choice for families who want minivan-lite functionality along with classy styling and a luxurious interior.

Sleek design inside and out, smooth and quiet ride, all three rows are spacious, ample cargo space, top crash-test scores.

General Motors spent much of the past year in corporate turmoil, but you wouldn't know it from the 2010 Buick Enclave. Now entering its third year of production, Buick's three-row crossover SUV continues to be one of the most appealing large crossover SUVs available. The Enclave rides on the same unibody platform as the Chevrolet Traverse, GMC Acadia and Saturn Outlook, but it's more than just a badge job. The Enclave has a certifiably luxurious interior, and its slick exterior styling further distinguishes it as the upscale offering of this quartet.

Among the Enclave's principal strengths are its quiet and comfortable ride, capable 3.6-liter V6, handy 116 cubic feet of maximum storage space and top crash-test scores. The versatility of its seven- or eight-person seating layout is another plus: The standard 60/40-split fold-flat third-row seat accommodates three in a pinch, and buyers can choose either twin captains' chairs for the second row (standard) or another three-person bench. Add the Enclave's luxurious interior and curvaceous body to the mix and it's easy to see why we've consistently praised this crossover in reviews since its introduction.

Minivans like the Honda Odyssey are still preferable if functionality is your top priority, but consumers these days are increasingly willing to trade some cargo space and ease of access for a dollop of style. If you're among them, the Enclave remains a top choice. The Enclave is also an intriguing alternative to luxury crossovers from Acura, BMW, Lexus and Mercedes-Benz, though deep-pocketed buyers may have trouble looking past the Buick's sometimes questionable cabin materials and dowdy old-man image. We'd also recommend checking out the Ford Flex as well as the Hyundai Veracruz and Mazda CX-9, which are smaller but more maneuverable. Overall, though, the 2010 Buick Enclave is an excellent all-around choice for families in search of space, style and luxury at a price that won't break the bank.

On the options list, the Bose stereo can be added to the base CX, but there are three high-tech packages that are only offered on CXL1 and CXL2 models -- a rear-seat entertainment package (including Bose audio, a DVD player, rear audio controls and an 8-inch flip-down screen), a navigation package (Bose, rear audio controls and a navigation system with back-up camera display), and a package that combines the two. The CX can, however, be outfitted with the back-up camera, rear parking sensors and remote ignition. Other Enclave options include a dual-pane "SkyScape" sunroof (not available on CX), a second-row storage console with a 12-volt power outlet (also not available on CX) and towing preparation.

The 2010 Buick Enclave offers a choice of front-wheel drive or all-wheel drive. Either way, the power plant is a 3.6-liter V6 that pumps out 288 horsepower and 270 pound-feet of torque. A six-speed automatic transmission is standard, and it's been updated for 2010 with noticeably more responsive downshifts. EPA fuel economy estimates stand at 17 mpg/24 mpg highway and 19 mpg combined for front-wheel-drive models, while all-wheel-drivers drop to 16/22/18. With the optional trailering package, the Enclave can tow up to 4,500 pounds.

Stability control, front-seat side airbags and full-length side curtain airbags are standard on all 2010 Buick Enclaves. In brake testing, the Enclave came to a stop from 60 mph in a long 139 feet with noticeable fade after multiple stops -- the Flex and CX-9 perform better. In government crash tests, the Enclave scored a perfect five stars for both frontal and side impacts. In Insurance Institute for Highway Safety testing, the Enclave earned the best score of "Good" in frontal-offset and side-impact crash tests.

The Enclave's cabin has an upscale vibe thanks to its stylish dash and wood-grain inlays. There's chrome trim everywhere, though, which means blinding reflections when the sun's at certain angles. Two other downsides include small and indistinct buttons for the audio and climate controls and outward visibility that's more compromised than that of other competing vehicles.

On the bright side, the Enclave is one of the roomiest crossover SUVs on the market. There are 19 cubic feet of usable space behind the third-row seat, 68 cubic feet with the third row's 60/40 sections folded into the floor, and an enormous (though not quite minivan-grade) 116 cubic feet with the second row folded. Third-row access is facilitated by a tilt-and-slide function for the second-row seats; however, some agility is still required to get back there, and the Enclave's third row is more claustrophobic than the Ford Flex's.

The 2010 Buick Enclave tips the scales at close to 5,000 pounds with all-wheel drive, so it would be a stretch to call this gargantuan vehicle "carlike," a term often applied to crossover SUVs. Indeed, we've noted that the Enclave feels bigger and more ponderous on the road than some rival crossovers. Nonetheless, its 3.6-liter V6 is plenty powerful in most situations, and handling is uninspiring but secure. The Enclave also shines on road trips thanks to its quiet ride and compliant suspension.