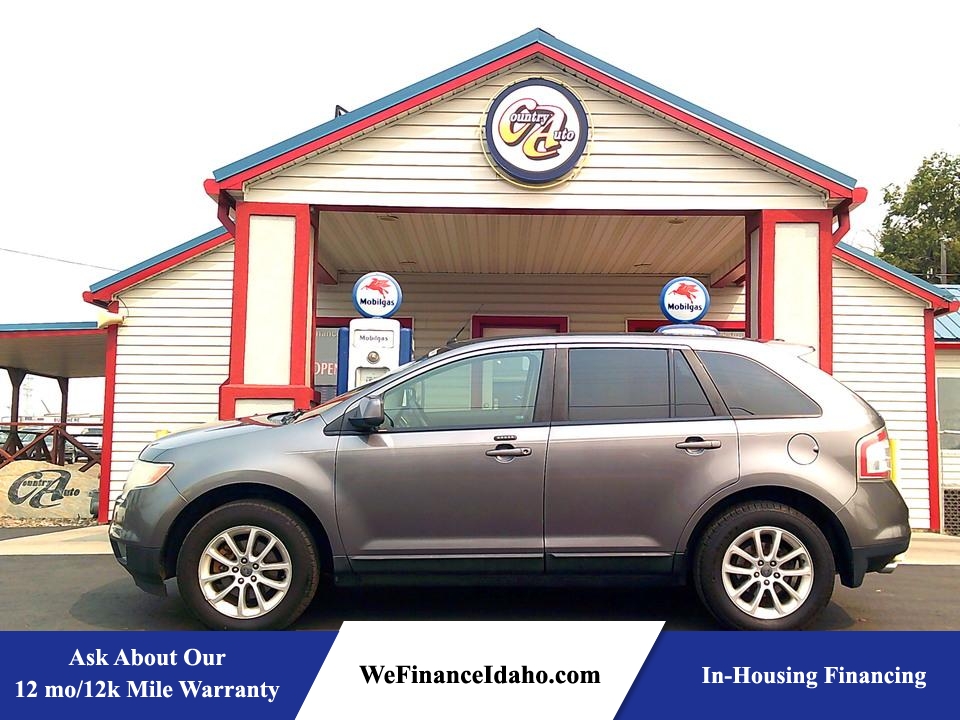 The 2009 Ford Edge is not our first choice among midsize crossover SUVs, but it is a solid entry nonetheless. It is comfortable and spacious and offers confidence-inspiring handling, while its engine provides a good mix of power and fuel economy.

A Sport model debuts in the Ford Edge lineup for 2009. Features include unique exterior and interior styling cues and larger wheels and tires. All trim levels get blind spot mirrors and Ford's SOS Post-Crash Alert system, which activates the horn and emergency flashers if the airbags are deployed. The latest Ford navigation system, which includes Sirius Travel Link, is added to the Edge along with a few other standard and optional items.

Competition seems to get stiffer every year in the midsize crossover segment. Even with fluctuating fuel prices and economic uncertainty, many families are still choosing to ditch their big SUVs for more moderate choices in terms of size and fuel economy. The five-passenger 2009 Ford Edge throws its hat into this competitive ring with handsome looks, a relatively roomy cabin and a punchy 265-horsepower V6 engine.

For 2009, a Ford Edge Sport trim level joins the lineup. It includes unique bodywork, standard 20-inch wheels and Alcantara seat trim, all of which give it a more aggressive look over the other trim levels. Giant 22-inch wheels and performance tires are also available for those who subscribe to "DUB" or who enjoy a rock-hard ride. Also new throughout the range are blind spot mirrors integrated into the large side mirrors that are a simpler and more useful solution than more complicated blind spot warning systems. Ford's latest navigation system and Sirius Travel Link can also be had on the Edge for 2009, the latter providing real-time traffic, weather and sports score information.

Overall, the 2009 Ford Edge is a solid choice in the midsize SUV segment. However, cabin design and quality are a step behind many competitors, and the brakes don't instill confidence. We think there are better choices available, including the Nissan Murano, our top pick in the five-passenger crossover segment. Others to consider would be the all-new Toyota Venza, the value-oriented Hyundai Santa Fe and the sporty Mazda CX-7. Larger crossovers like the Chevy Traverse and the excellent Ford Flex should also be considered. In other words, the competition isn't getting any easier for this pleasant crossover SUV.

Major options for the SEL and Limited include a panoramic glass roof with a power front sunroof and a fixed rear skylight, 18- or 20-inch chrome wheels, a rear entertainment system, and a voice-activated navigation system with Sirius Travel Link, digital music storage and a single-CD player that replaces the six-disc changer. Although the factory DVD entertainment system cannot be combined with the Vista Roof, Ford dealers can install a dual-screen system that mounts the displays in the front headrests. Class II towing preparation is available on all Ford Edges.

Powering the Edge is a 3.5-liter V6 that makes 265 hp and 250 pound-feet of torque. A six-speed automatic transmission is standard. All trim levels offer a choice of either front-wheel or all-wheel drive. On AWD models, power flows primarily to the front wheels until wheel slippage occurs, in which case nearly all the power can be redirected to the rear. EPA fuel economy estimates for front-wheel-drive versions are 17 mpg city/24 mpg highway and 19 mpg combined. Four-wheel-drive models get 15/22/18 mpg.

The Edge is about average in terms of acceleration, with the front-wheel-drive version going from zero to 60 mph in 8.1 seconds. The Edge's braking performance used to be truly appalling (something to consider for buyers seeking a used Edge), and although the brakes have been improved, they remain a detraction. Properly equipped, the Ford Edge can tow up to 3,500 pounds, which is average for the segment.

Antilock disc brakes, stability control (with rollover avoidance logic), front-seat side airbags, full-length side curtain airbags and blind spot mirrors are all standard. In government crash tests, the 2009 Ford Edge nearly had a perfect sweep. It scored five stars (out of five) for the driver and four stars for the passenger in frontal impact tests, while it earned five stars in side impact testing for both front and rear passengers. In Insurance Institute for Highway Safety crash tests, the Edge scored the highest possible rating of "Good" in both frontal offset and side impact testing.

In contrast to the exterior, the cabin of the Edge is rather ordinary and not smartly designed. The cruise control buttons aren't intuitive, and the center stack air vents don't offer enough range of adjustability. Many interior materials are low quality, and the standard radio faceplate is ugly, placed far away and not particularly up to the task of operating satellite radio and Sync.

However, certain features, like the telescoping steering wheel, numerous storage bins and reclining rear seats help make up for the Edge's shortcomings, and the optional glass Vista Roof imparts an airy feel. Without the power feature, the Edge's rear hatch can be hard for shorter drivers to close, but cargo capacity is a respectable 32 cubic feet with the backseat in use. Folding down the second row opens up a not-so-flat cargo floor and a max capacity of 69 cubes. That's more than in a Murano but less than the "compact" RAV4 and considerably less than the Ford Flex.

The 2009 Ford Edge is most notable for its comfortable ride and quiet cabin. Acceleration from the standard V6 is strong, and shifts from the six-speed automatic are smooth and well-timed, although we wish there were better manual access to gears (you're limited to "D," "O/D off" and "L"). Despite its vague, numb-on-center steering, the Edge provides solid handling that instills confidence. The same can't be said for the brakes, which remain mushy and susceptible to fade -- although they are dramatically improved from those of past model years.