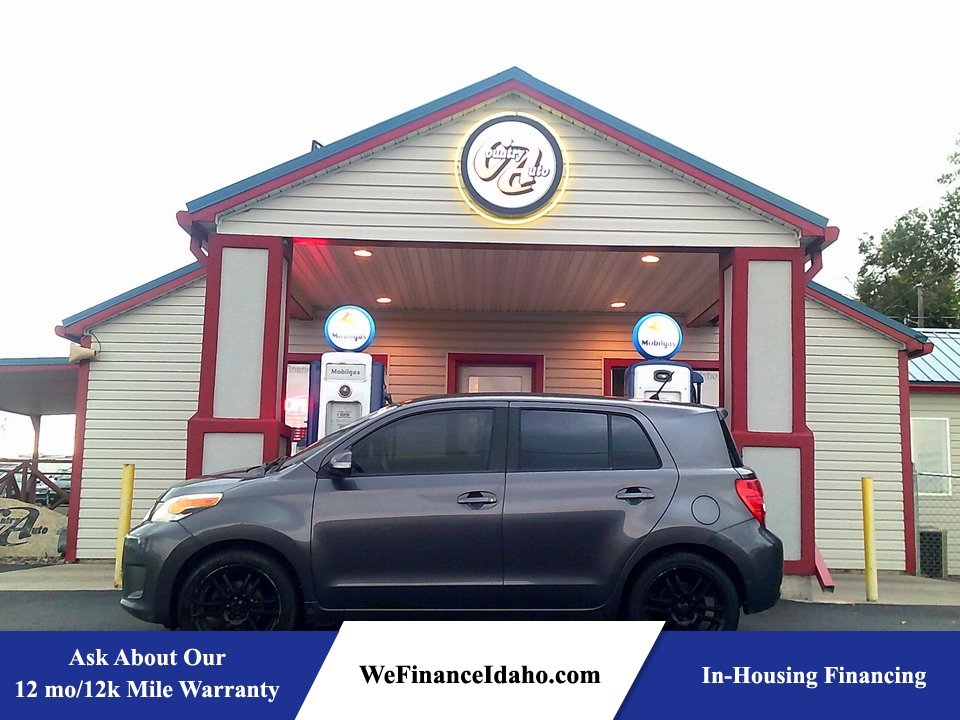 A stylized exterior and an impressive features list should attract buyers to this cool compact hatch, but some competing models offer more utility, driver comfort and fun.

The 2008 Scion xD is an all-new model that replaces the xA at the bottom of Scion's lineup. This four-door hatchback features distinctive styling, peppy performance and an impressive list of standard features and personalization options.

No, that's not a rhinoceros, it's the 2008 Scion xD. Not exactly the ideal animal to be compared to (wide-mouth grille, Scion logo instead of horn), but at least the xD is distinctive. After all, being different is the raison d'etre at Scion, Toyota's spin-off brand known for its youth-oriented focus and long list of dealer-installed customizing features for the Pimp My Ride generation.

Just as the boxy xB captured a certain type of buyers' hearts when it first debuted, Scion hopes that the xD's interesting visage will collect its own cult following. All-new for 2008, the xD has been designed with American customers in mind. In both price and lineup positioning, it replaces the xA hatchback, a vehicle that never seemed quite cool enough for the Scion brand.

Heavier and more substantial-feeling than the xA, the new xD shares its basic underpinnings with the latest Toyota Yaris hatchback. One significant difference, however, is that the xD comes with a more powerful 128-horsepower, 1.8-liter four-cylinder engine. In testing, we've found that this is enough to allow the xD to out-accelerate competing subcompacts from Honda and Nissan while also returning similar fuel economy.

In addition to its engine and National Geographic front end, the 2008 Scion xD distinguishes itself with a lengthy list of standard equipment and dealer-installed extras -- especially the audio options. While other automakers have made auxiliary input jacks standard equipment, Scion has gone one step further with a regular aux jack and a dedicated iPod port that provides power and stereo head unit control. We haven't had a chance to test the regular head unit, but the upgraded stereo provides a user-friendly interface and large screen to toggle through playlists, artists and songs. The xD is also one of the least expensive vehicles to currently offer an integrated navigation system.

There are some downsides to the 2008 Scion xD. Compared to popular choices in this segment like the Chevrolet Aveo, Honda Fit and Nissan Versa, it falls short in terms of maximum cargo space (with both the rear seats raised and lowered). Its interior is also hampered by odd-looking gauges and a lack of front legroom. Nor is the xD particularly engaging to drive. But it does have a clear advantage in the intangible X-factor category. Its "unique" styling, customizable features, impressive stereos and overall funky character are the types of things that will attract plenty of buyers in their teens and 20s. And for that reason, we think the new xD is certainly worth checking out.

The 2008 Scion xD is a four-door subcompact hatchback available in one trim level. Standard equipment is plentiful for this price range, with 16-inch steel wheels with a choice of three covers, air-conditioning, cruise control, full power accessories, a tilt steering wheel and a thumping six-speaker Pioneer stereo with single-CD/MP3 player and both an auxiliary MP3 jack and a dedicated iPod port that allows one to control iPod playback through the head unit controls.

Naturally, the xD is available with a long list of dealer-installed extras for those who want to personalize their car. These include multiple alloy wheels, a rear spoiler, LED taillights, a silver-leather-wrapped steering wheel, a variety of shift knobs, a security system and interior mood lighting in a choice of four colors. An optional premium audio system has a more user-friendly control interface that allows for downloading images and video onto the head unit display. Other options include TRD performance parts, a choice of satellite radio providers and a touchscreen navigation system.

Scion's new xD is motivated by a 1.8-liter four-cylinder engine that produces 128 hp and 125 pound-feet of torque. Estimated fuel economy is a very competitive 27 mpg city/33 mpg highway with the five-speed manual and 26/32 mpg with the four-speed automatic. In our testing, an xD with the manual went from zero to 60 mph in 8.4 seconds, while stopping from 60 in a short 123 feet.

The new xD sports a functional, well-built and certainly hip interior design. Unlike the new xB and the outgoing xA, the gauges are where they belong -- in front of the driver instead of in the dash center -- but the speedometer and tachometer are placed in the same circular pod and run toward each other. Imagine a clock where the minute and hour hands move in opposite directions. The tach in particular is hard to read and we once again must say to Scion: "We understand being different is your thing, but just leave the gauges alone." Other controls are the model of simplicity.

The optional navigation system makes audio control even simpler (and safer) by utilizing the touchscreen to create crystal-clear functions that mirror those on the iPod itself. The standard speakers aren't fantastic, but Scion makes it simple to take them out and replace them with aftermarket units.

The xD has the same upright seating position as the Yaris and a driver seat that's short on legroom. Plus, the steering column adjusts only for rake, and when released, drops to its bottom-most position like an anchor. Headroom is quite good, though, and two rear passengers should find plenty of space with a seatback that reclines. Although not as voluminous as other compact hatches, the xD provides enough cargo room (35.7 cubic feet with the rear seats folded) for the active lifestyles Scion envisions its customers leading.

In a comparison test of the xD and the Honda Fit, we found that the Scion feels like a more substantial car than the tiny Honda, despite being slightly smaller on the outside and significantly smaller inside. Credit the xD's high beltline, heavier curb weight and stronger engine for making it feel less like a toy -- particularly on the highway when large SUVs and big rigs can make compact hatch drivers feel like they're in a paddleboat stuck in the Norfolk Navy Yard. The xD's electric steering feels very much like the Yaris's -- extremely artificial at lower speeds -- but it does weight up nicely and offers decent feel at higher speeds. No one will ever confuse the 2008 Scion xD for a hot hatch (in looks or performance), but its comfortable ride, solid feel and reassuring stability control make it a good choice for those who don't put a premium on driving fun.