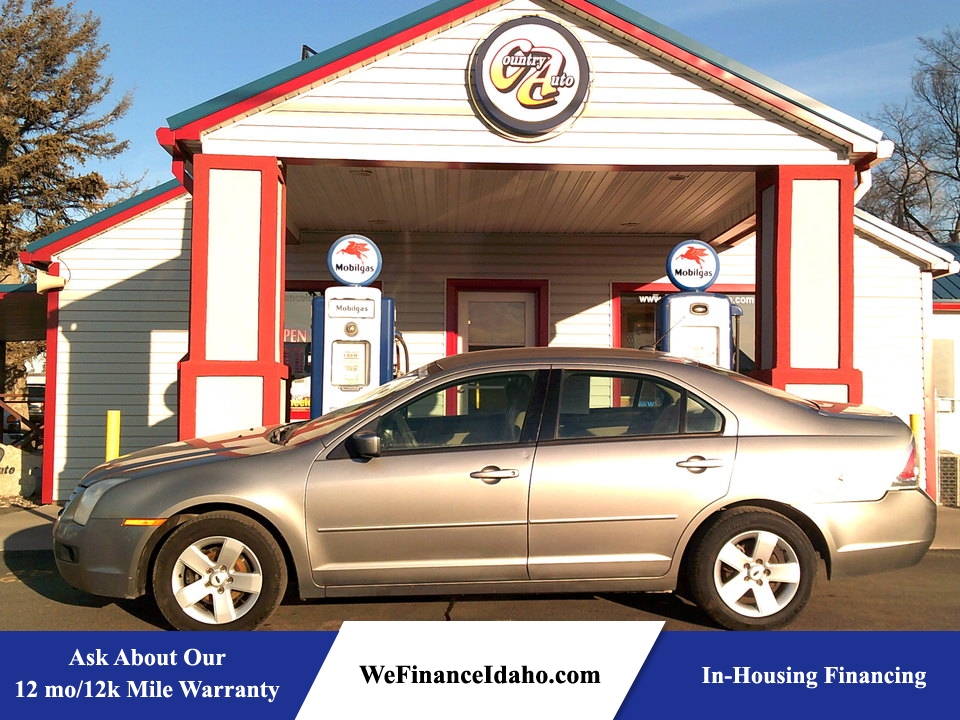 Although the 2008 Ford Fusion gives up some speed and refinement to the class leaders, this midsize family sedan is worth considering if you're looking for a roomy and sporty sedan with styling that doesn't get lost in the crowd.

The 2008 Ford Fusion gains a number of standard and optional features. Among the former are antilock brakes for all trims and a keyless-entry keypad for the SEL version. New options include a reverse parking sensor, the late availability of the Ford "Sync" system (which integrates devices such as cell phones and MP3 players into the vehicle's controls), upgraded interior ambient lighting (also late availability) and a Sport Appearance package that adds 18-inch wheels, a sport-tuned suspension and special interior and exterior trim.

Ford's midsize family cars have typically been comfortable and safe, although not up to the class leaders in terms of performance and refinement. A few years ago, the company brought the Fusion to market, intent on improving its competitiveness in the segment. Based on a larger version of the Mazda 6 platform, the Fusion combined the 6's athleticism with more passenger room than its Japanese cousin.

As such, the 2008 Ford Fusion is defined by its handsome styling, sporty handling character and spacious cabin. The availability of all-wheel drive gives it an advantage for those who live in climates prone to frequent rain and snow. There are a few upgrades for '08 to be aware of as well. Notably, the Ford Sync (no, it's not the carmaker's in-house boy band) is a system that integrates personal devices into the Fusion's center stack controls and display. With Sync, drivers and passengers can access and operate their cell phones, PDAs, USB storage devices, iPods or other MP3 players using voice commands. The cell phone's address book is also wirelessly and automatically transferred to the vehicle.

However, a couple of weak areas continue to keep the Fusion from getting to the head of the class. Stability control, a key safety feature, is not offered. And although decent performers, neither the base four-cylinder nor the optional V6 can challenge the competition in terms of all-out acceleration and refinement. As such, all-star sedans like the Honda Accord, Nissan Altima and Toyota Camry are still better and more polished cars. But they do cost more. When compared to more similarly priced models like the Chevy Malibu, Chrysler Sebring, Hyundai Sonata and Saturn Aura, the 2008 Ford Fusion ranks quite well and breaks Ford out of its midsize sedan funk.

Option highlights for the Fusion include a moonroof, leather upholstery, a Scion-like interior ambient lighting scheme (late availability -- it allows one to switch among seven colors for the footwells and console's cupholders), heated front seats, the Ford Sync system (also late availability), an upgraded eight-speaker stereo, a DVD-based navigation system, satellite radio and a rear spoiler.

Standard on all Fusions is a 2.3-liter, 160-horsepower four-cylinder engine that runs so clean that it meets Partial-Zero Emissions Vehicle certification in California. A five-speed manual transmission is standard and a five-speed automatic is optional. The SE and SEL trims offer a 3.0-liter, 221-hp V6 whose sole transmission choice is a six-speed automatic. Although the latter provides an impressive number of gears, it doesn't allow the driver to shift manually -- there are only two forward-gear gates ("D" and "L"), neither of which has much effect on the tranny's behavior.

Front-wheel drive is standard on all Fusions, while V6 trims also offer optional all-wheel drive. For a midsize sedan, the Fusion puts up respectable fuel economy numbers. The four-cylinder/automatic 2008 Fusion posts 20 mpg city and 28 mpg highway, while the V6 version rates 18 and 26, respectively. The V6 with AWD earns one mpg less in each category.

Antilock disc brakes, front-seat side airbags and side-curtain airbags are standard on all Fusions. Traction control is optional on front-wheel-drive V6 models, but stability control is not available at all. A reverse parking sensor is optional.

Inside the stylish cabin, ergonomics are a mixed bag. Most controls are easy to use, but the instruments are a bit small and there's no display for the automatic transmission, forcing the driver to look down at the shifter to confirm gear selection. Depending on the trim level, accents of faux carbon-fiber, wood tone and piano black are sprinkled throughout, and the SEL model offers leather seating with contrasting stitching, an analog clock and steering-wheel-mounted audio and climate controls.

Although the upholstery is neatly tailored and build quality is above average, some of the interior's plastics feel cut-rate. The standard "brick" stereo faceplate with its tiny green readouts is outdated and looks cheap. In its favor, the Fusion's spacious cabin offers plenty of room for all passengers. A pair of adults will be content in the back of a Fusion, and storage space is adequate. An unexpected measure of utility is provided by the Fusion's 15.8-cubic-foot trunk, split-folding rear seat and fold-down front-passenger seat (SE and SEL models only), allowing bulky items to be transported inside the car.

With its responsive steering and refined ride, the 2008 Ford Fusion is one of the more entertaining vehicles in the family sedan segment. Wind and road noise are muted at highway speeds, and both automatic transmissions perform competently. Unfortunately, neither engine offers much off-the-line grunt, and both get a little noisy at higher rpm. More horsepower and an automatic transmission with manual-shift capability would certainly lend support to the Fusion's sporty aspirations, but thanks to its communicative steering and well-planted demeanor, it's still an enjoyable car to drive by family sedan standards.