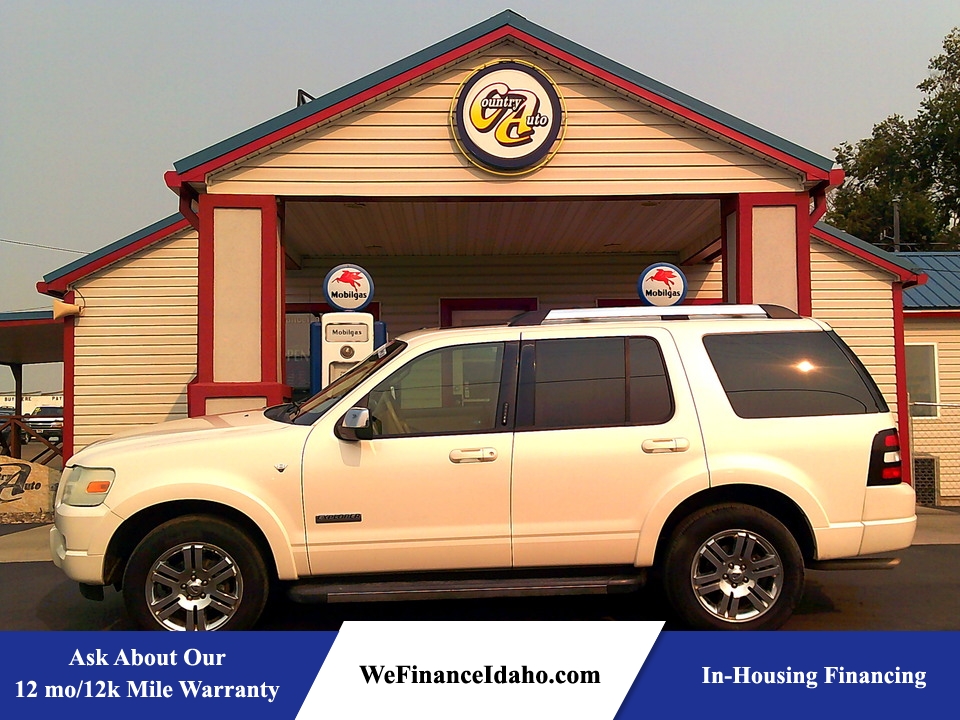 Although engine performance is mediocre, the midsize 2008 Ford Explorer deserves consideration from anyone shopping for a traditional SUV with substantial towing and hauling capabilities. But for those who just need a family cruiser, newer seven-passenger crossovers provide more space, superior driving dynamics and slightly better gas mileage.

Side curtain airbags are now standard on all Explorers, as is a capless fuel filling system (though availability is delayed until midyear on the latter). Also available on the Explorer for 2008 is Ford's new Sync system, the hands-free electronics integration technology co-developed with Microsoft. The optional navigation system includes voice activation this year. Kings of bling will be pleased to hear that they can option the Explorer with 20-inch wheels later in the '08 model year.

The king has fallen. For more than a decade, the Ford Explorer was the undisputed ruler of the SUV kingdom and an elemental reason for the sport-utility craze that is still going on. But in recent years the Explorer has been dethroned by several other SUVs, falling precipitously in the sales rankings amidst high gas prices and the success of crossovers. While the 2008 Explorer is the best yet, its truck-based underpinnings are starting to make it look like a dinosaur amongst the new species of crossover SUVs.

This doesn't mean the 2008 Ford Explorer wouldn't be a good choice, especially if you need three rows of usable seating in a midsize SUV body. Ford made substantial upgrades to the Explorer for the 2006 model year that refined its already impressive road manners. We consider it one of the best-handling truck-based SUVs on the market, and its smooth, quiet highway ride makes it a natural road trip candidate. Plus, its truck-based, body-on-frame chassis can handle greater towing loads than crossovers can, and the dual-range gearing of four-wheel-drive models provides a bit more off-road ability.

For 2008, Ford adds its innovative Sync system to the Explorer. This technology, co-developed by Microsoft, allows drivers to control communication and entertainment devices like cell phones, PDAs, iPods and other MP3 players via voice commands. It is a potentially revolutionary technology and a considerable selling point for the aging Explorer. Later in the model year, all Explorers gain a capless fuel-filling system, which cuts gasoline vapor leaks and eliminates the embarrassment of driving off without re-capping your gas tank.

Although the 2008 Ford Explorer has plenty to offer in the way of utility and technology, compared to other traditional, truck-based SUVs, it's lacking in power. The base V6 engine makes only 210 horsepower. Not only is this a low number for this hefty class of vehicles, it's also 53 hp south of Ford's smaller Edge crossover. The optional V8 is smoother and puts up a more impressive 292 hp, but it still lacks the low-end pull of competitors' V8s and, increasingly, their V6s as well.

For buyers who aren't concerned about having the quickest SUV on the block, the Explorer is an impressive package. It's comfortable enough to serve carpool duty, yet rugged enough to handle a 7,000-pound camper or the dirt trail leading to your secluded mountain hideaway. Those last two points are important, because truck-based SUVs like the Explorer are best suited to people who really need them. For family-minded buyers who just need copious amounts of cargo and passenger space, a crossover SUV or minivan is apt to be a better fit.

The Ford Explorer's base engine is a 4.0-liter V6 good for 210 hp and 254 lb-ft of torque. Optional on all models is a 4.6-liter V8 engine with 292 hp and 300 lb-ft of torque. A five-speed automatic transmission is standard with the V6 engine, and the V8 comes matched to a six-speed automatic. Either engine can be equipped with a choice of two-wheel-drive or a four-wheel-drive system with a push-button transfer case. Properly equipped, a V8 2WD Explorer can tow 7,300 pounds. When it comes to acceleration, a 4WD Explorer equipped with the V8 takes a mediocre 9 seconds to reach 60 mph. For comparison, a V8-equipped Nissan Pathfinder does the same run in 7 seconds flat.

All major safety equipment is standard on the 2008 Ford Explorer, including antilock disc brakes, stability control, front-seat side airbags, and first- and second-row side curtain airbags. The stability control system includes an important feature called Roll Stability Control (RSC), which uses a gyro sensor to calculate the SUV's roll speed and angle. If RSC determines a rollover is imminent, it activates the regular stability control to help avoid it. A reverse parking sensor system is standard on the Limited and optional on other trims.

The Explorer earned a perfect five stars in all frontal- and side-impact crash tests conducted by the National Highway Traffic Safety Administration, as well as the top rating of "Good" in the Insurance Institute of Highway Safety's frontal-offset crash testing.

Despite incremental improvements over the years, the Explorer's materials quality remains mediocre and its design rudimentary, though sharp two-tone color schemes make this workaday SUV feel a little more upscale. It's feasible to carry two adults in the third-row seats, but choosing the third-row option slightly reduces the available cargo space and results in a not-quite-flat load floor. Seven-passenger Ford Explorers max out at 83.7 cubic feet of cargo space, while five-passenger versions offer 85.8 cubic feet. Notably, the 60/40 sections of the second-row bench seat recline only if your Explorer has a third-row seat. The "quad seating" option on Limited models drops passenger capacity to six and places reclining captain's chairs in the second row with a storage console between them.

Any 2008 Ford Explorer is a relative joy to drive compared to other truck-based SUVs like the Dodge Durango and Chevy Trailblazer. Taking much of the credit for this praise is the rear independent suspension, which provides a smooth ride and keeps the wheels planted on rough pavement. Steering is surprisingly responsive and the brakes inspire confidence through a firm and progressive pedal. Power from either the V6 or V8 engine is adequate, though most buyers will prefer the V8's extra helping of low-end torque and refinement.