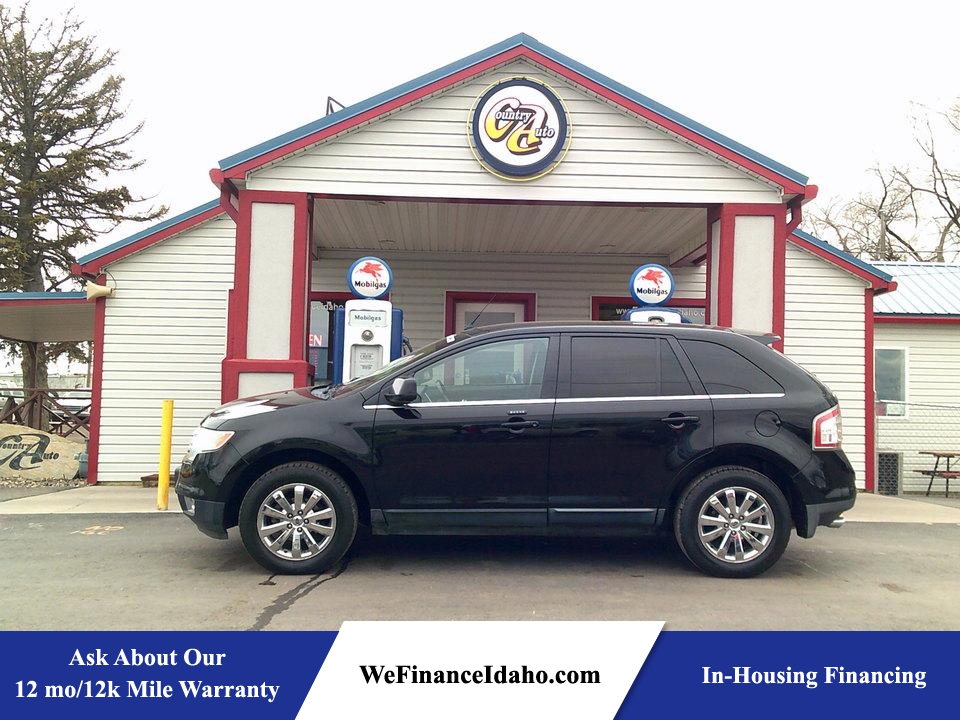 Midsize crossover SUVs are fast becoming the family car of choice. Offering carlike ride and handling along with a more reasonable size and fuel economy than traditional truck-based sport-utilities, these crossovers have found appeal with a wide range of shoppers.

Ford's entry for this segment is the Edge. Debuting just last year, the five-passenger Edge boasts handsome looks and a punchy 265-horsepower V6 engine. Inside, the cabin is sufficiently roomy and comfortable for daily use. A third-row seat, an increasingly popular feature for this vehicle segment, isn't available, though its usefulness in competing vehicles is debatable. If you're truly in need of a six- or seven-passenger vehicle, the larger Taurus X is probably a better choice anyway.

This year's Edge receives a few new thoughtful features. Among them are the available "Sync" system (which allows integrated and voice-controlled operation of all kinds of personal electronics such as cell phones and MP3 players), an optional power liftgate and a voice-activated navigation system. There is also a new Limited trim level and optional 20-inch wheels.

Overall, the 2008 Ford Edge is a solid pick for the would-be midsize-SUV buyer. But there are a couple things to note. Its overall cabin design and quality is a step behind many competitors, and in testing we've found that its brakes lack the power we would expect from this class of vehicle. If these prove to be turn-offs for you, models like the Hyundai Santa Fe, Mazda CX-7, Nissan Murano and Toyota RAV4 V6 might prove more appealing.

The SE doesn't offer a whole lot in terms of options. Major options for the SEL and Limited include the Vista Roof (consists of a power front sunroof and fixed rear skylight), a power liftgate, 18- or 20-inch chrome wheels, the aforementioned Sync system, an upgraded nine-speaker sound system, a voice-activated navigation system and a rear entertainment system. Although the factory DVD entertainment system cannot be combined with the Vista Roof, Ford dealers can install a dual-screen system that mounts the displays in the front headrests. Satellite radio and Class II towing preparation are available on all Ford Edges.

The Edge comes with a 3.5-liter V6 rated for 265 hp and 250 pound-feet of torque. A six-speed automatic transmission is standard. All trim levels offer a choice of either front-wheel or all-wheel drive. On AWD models, power flows primarily to the front wheels until wheel slippage occurs, in which case nearly all the power can be redirected to the rear.

The Edge is quick, with a 0-60-mph time of just 7.4 seconds (front-driver version). Shifts from the six-speed automatic are smooth and well-timed, though we wish there was better manual access to gears. (You're limited to "D," "O/D off" and "L.") Properly equipped, the Ford Edge can tow up to 3,500 pounds, which is average for the segment.

Fuel economy estimates for 2008 are a mixed bag, with the Edge's city figure at 16 mpg on the low side, while the highway number of 23 is about average. Those are for the FWD version; the AWD Edge rates 1 mpg lower on the highway.

Antilock disc brakes, stability control (with rollover avoidance logic), front-seat side airbags and full-length side curtain airbags are all standard. Rear parking sensors are optional on SEL and Limited models.

In contrast to the exterior, the cabin of the Edge is rather ordinary and not smartly designed. The cruise control buttons aren't intuitive to use, for instance, and the center stack air vents don't offer enough movement. Many of the interior materials are of low quality as well. Features like a telescoping steering wheel, numerous storage bins and reclining rear seats ensure long-haul comfort, at least. The optional glass Vista Roof imparts an airy feel. Without the power feature, the Edge's rear hatch can be hard for shorter drivers to close, but cargo capacity is a respectable 32 cubic feet with the backseat in use. Folding down the second row opens up a not-so-flat cargo floor and a max capacity of 69 cubes. That's more than a CX-7, but less than the "compact" RAV4 and considerably less than a Murano or Santa Fe.

Out on the road, the 2008 Ford Edge is one of the quicker SUVs in its class and manages to provide both sporty handling and a smooth, quiet ride. As with most of its peers, off-roading is not really within its grasp, but equipped with AWD, it should make a fine winter-weather vehicle. Unfortunately, the Edge has one major weakness: its brakes. Pedal feel is solid, but stopping distances are much longer than they should be in panic situations. An Edge we tested needed 152 feet to stop from 60 mph. That's a foot longer than a Ford F-450 Super Duty pickup we tested, and much longer than other midsize crossovers, which tend to stop in the 130s.