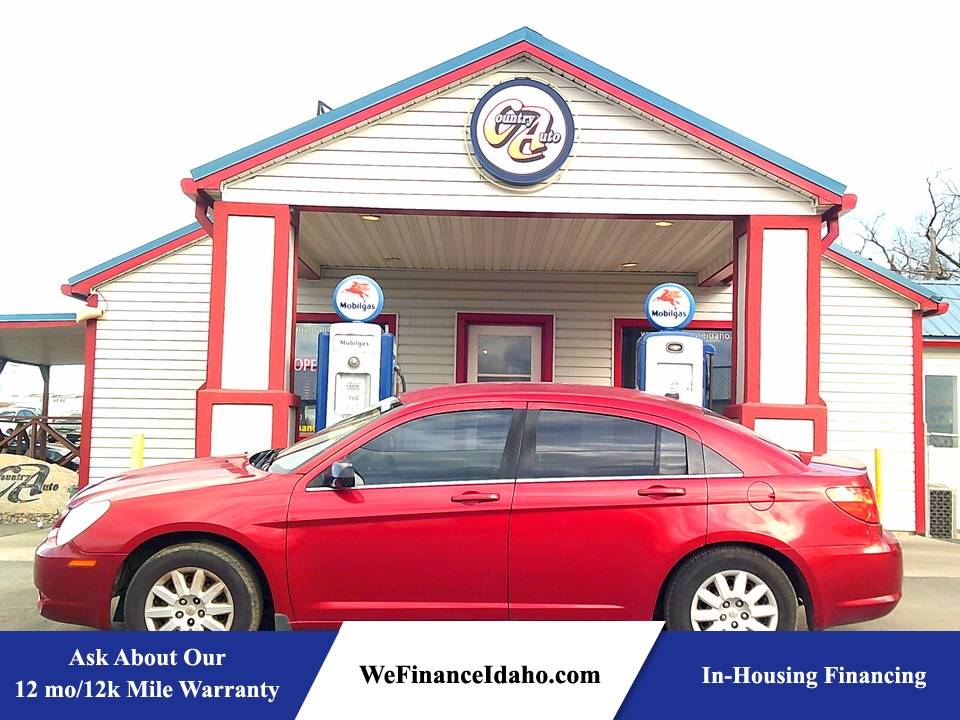 The 2008 Chrysler Sebring is an improvement over its predecessor, especially with the convertible's available retractable hardtop. While that convertible makes a case for itself, the sedan is outdone by just about every other vehicle in its class.

Joining the Sebring sedan is a convertible model available in soft- and hardtop body styles. The latter is a first for the Sebring and better provides all-season protection for America's best-selling convertible. All Sebrings gain standard satellite radio and an in-dash CD changer.

Whether you've just left the Enterprise Rent-a-Car desk at Tampa's airport or you're a regional manager for a paper supply company in Scranton, Pennsylvania, the Chrysler Sebring convertible has always served as comfortable top-down transportation with a touch of luxury. Debuting more than a decade ago, it has been one of America's most popular convertibles in terms of sales. With its redesigned 2008 Sebring convertible, Chrysler is hoping to maintain that supremacy by upping the comfort and luxury quotient with a longer equipment list and an available retractable hardtop.

The new Sebring convertible, as well as the redesigned sedan body style introduced last year, are based on a stretched and widened version of the platform also used for the mediocre Dodge Caliber compact. And like the Caliber, the Sebring's driving experience leaves much to be desired, with subpar handling and unrefined engines. Although the optional 3.5-liter V6 is fairly powerful, its gas mileage is poor. In all-wheel-drive form, it gets 15 mpg city and 24 mpg highway -- worse than a Chevrolet Corvette.

More attractive for consumers is the convertible's choice of either a retractable hardtop or conventional soft top. The optional retractable hardtop successfully hushes cabin wind noise and creates a more all-season-friendly car. The standard soft top is offered in vinyl or cloth, depending on the trim level, and comes with a large glass rear window. Although it may not be as trendy or all-weather capable as the $2,000 hardtop, it does maintain a nice-looking roof line.

In our tests of the Sebring midsize sedan, we've come away disappointed. It's rather bland and offers nothing special in terms of performance or interior design. In what is arguably the most hotly contested car segment, the Sebring ranks far behind practically everything, from the Honda Accord and Nissan Altima to the Saturn Aura and Hyundai Sonata. We recommend looking elsewhere.

The Sebring convertible, however, makes a more compelling case. Partly, this is because there isn't as much competition (Honda doesn't make an Accord convertible, for instance) and partly because there's just more to like. The Sebring's closest competitor is the Toyota Camry Solara, and compared to that aging vehicle, the Sebring offers a steel roof option, better driving dynamics and more interior features. The Pontiac G6 convertible also has a standard retractable hardtop and is sportier, but it's neither as elegant nor as spacious. Therefore, the new 2008 Chrysler Sebring convertible is a pleasing middle-ground choice. Just don't be surprised when you start to see it showing up in a Florida rental car lot or in Michael Scott's parking space on The Office.

Both Touring body styles add 17-inch wheels and a lengthier options list, while the Touring sedan adds the upgraded cloth and six speakers. The range-topping Limited sedan adds leather upholstery, a leather-wrapped steering wheel, automatic climate control, an auto-dimming rearview mirror and an upgraded Boston Acoustics sound system. The Limited convertible includes a cloth top. All of these items are optional on the Touring.

The Sebring's lengthy options list available on the Touring and Limited models includes heated front seats, Bluetooth (known as UConnect), heated/cooled front cupholders and remote start. A rear-seat entertainment system and sunroof are available on the sedan. The most interesting option available is a Harman Kardon-designed navigation/audio system (known as MyGIG) with real-time traffic updates and a 20GB hard drive that allows owners to rip their own CDs or download MP3 files from a jump drive using a USB port.

The convertible's retractable hardtop is an option on the Touring and Limited levels. A button on the remote fob that retracts the roof and windows is also an option.

The Chrysler Sebring sedan is available with either front-wheel or all-wheel drive. All Sebring convertibles are front-wheel drive. The standard engine is a 2.4-liter inline-4 that produces 173 horsepower and 166 pound-feet of torque. The Touring can be upgraded with a 2.7-liter V6 making 189 hp and 191 lb-ft of torque. Both of these engines come with a four-speed automatic transmission. The Limited features an optional 3.5-liter V6 that produces 235 hp and 232 lb-ft of torque and is coupled to a six-speed auto. All-wheel drive is only available with this latter engine and the Limited sedan trim level.

The four-cylinder 2008 Chrysler Sebring sedan has an EPA fuel economy rating of 21 mpg city/30 mpg highway, while the 2.7-liter V6 gets 19/27 mpg. The front-wheel-drive 3.5-liter V6 in both body styles is below many other top V6 sedans with a 16/25 rating, and all-wheel drive drops those figures down by 1 mpg.

The Sebring convertible comes standard with antilock brakes and side seat-mounted airbags, while the sedan offers full-length curtain airbags. Stability and traction control are standard on the Limited AWD sedan, optional on the front-wheel-drive Touring and Limited trims, and not available on the LX trim levels. In government crash testing, the Sebring sedan scored five out of five stars in frontal protection as well as front seat side protection. It scored three stars in rear seat side protection. In crash testing conducted by the Insurance Institute for Highway Safety, the Sebring convertible scored the best possible rating of "Good" in frontal-offset and side impact testing.

Like the pictures on a McDonald's menu, the Sebring's interior looks far better than it really is. Despite its ergonomically friendly art deco design that says Chrysler Building more than Chrysler car, materials are below average, with cheap plastics and hard surfaces. Opting for the pricier trim levels and luxury options helps the situation somewhat, but there's no escaping the general cost-cutting feel.

The Sebring convertible generally comes off as more luxurious than its four-door competition. It offers more backseat space than the Pontiac G6 or Volkswagen Eos, adding up to decent room for four. Like almost all hardtop convertibles, the bulky folded steel and glass panels take up significant space in the trunk, but the Sebring offers one of the most commodious top-down cargo holds, with room for two golf bags. In the G6, you'd only have enough space for two golf balls and a couple of tees.

Although the base four-cylinder delivers the best fuel economy (which isn't saying much), we think most buyers will be put off by its sluggish response and coarse power delivery. A better choice for most people is the 2.7-liter V6 available on the Touring. Still, the 3.5-liter V6 is far and away the best power plant in the lineup, but it comes at the expense of fuel economy. Ride quality is among the Sebring's strong points, as it's smooth and composed at high speeds. Handling is average as midsize sedans go, and no one will ever describe a Sebring as "fun."

The 330 pounds the convertible has gained over its predecessor is readily noticeable. This is especially true when the optional steel hardtop is folded away in the trunk, as the tail bobs up and down on undulating pavement. Handling is also compromised by all that weight over the rear wheels. The upside of the hardtop is that, when in place, it significantly cuts down on wind noise.