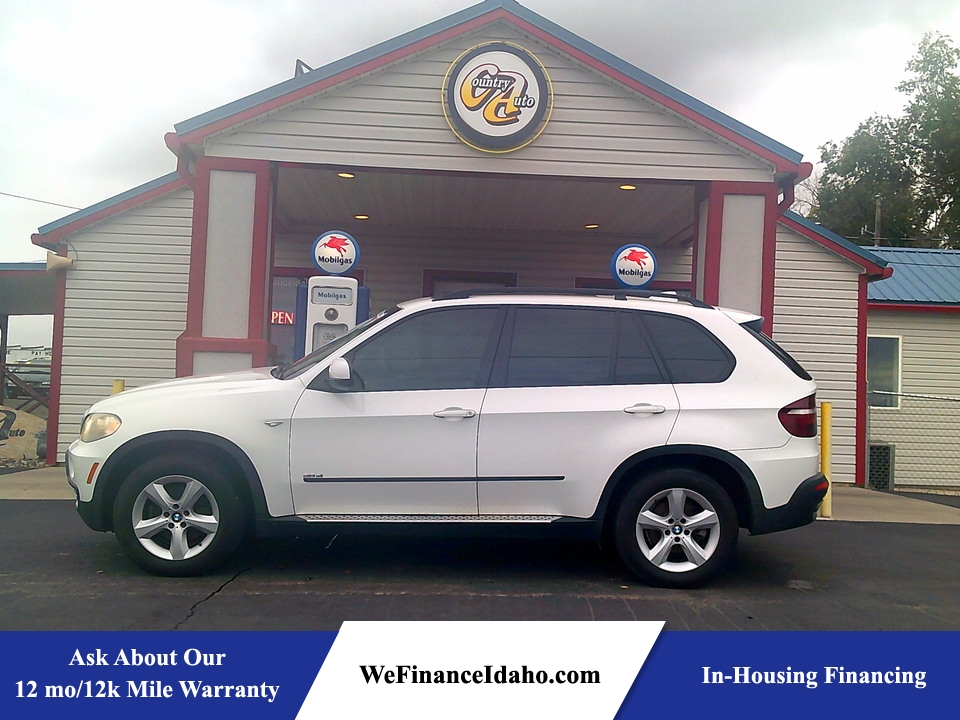 In the crossover luxury SUV segment, the 2008 BMW X5 sets the standard for handling and performance. In terms of value and utility, however, many competitors are better.

After a complete redesign last year, the BMW X5 has only minor changes to standard and optional equipment for 2008. Most noteworthy is that the sunroof is now standard, while a power tailgate option debuts.

Ten years ago, the idea of a performance SUV would have been sillier than the thought of a hit TV show featuring Wayne Newton and Marie Osmond dancing about in evening wear to Dolly Parton music. Okay, maybe not sillier, but still pretty eyebrow-raising. Yet the BMW X5 has quelled the notion that SUVs have to be sloppy-handling behemoths. Now in the second year of its second generation, the X5 has a lot more competition than it originally did, as a slew of premium automakers have followed BMW's suit with their own entries that pay more attention to "sport" than "utility."

Last year's complete redesign gave the X5 an added dose of both sport and utility. In terms of the latter, it grew in size (to distance itself from the X3), gaining more cargo capacity and enough space for a third-row seat. (Mind you, that optional folding third row is best suited for children and gymnastically inclined members of the Lollipop Guild.) The interior also can be equipped with BMW's latest selection of high-tech goodies, from optional 20-way power ventilated front seats to HD radio. Of course, the words high-tech and BMW cannot be uttered without a mention of the much-maligned iDrive electronics control interface -- yes, it's better than before, but it's time for BMW to swallow its pride and design a more intelligent system.

In terms of sport, the latest X5 boasts a completely new front suspension design for enhanced handling agility and a refined set of six- and eight-cylinder engines. As wonderfully as the first X5 drove, this second-generation one drives even better. There's more suspension compliance over bumps and harsh pavement, yet the vehicle is still quite agile and responsive when driven aggressively.

For Bimmer-philes and driving enthusiasts needing and/or wanting a midsize SUV, the 2008 BMW X5 is an obvious choice. However, the Acura MDX and Infiniti FX35 (on the lower end in terms of price) and Porsche Cayenne (on the high side) are also SUVs that will elicit plenty of grins around twisty roads. If handling isn't a priority, there are also several other crossovers in the X5's price range that offer a lot more value and utility. But if you can swing the price tag and can live with a little less space, then buying an X5 makes a whole heap more sense than watching Scary Spice rumba across a dance floor.

The 2008 BMW X5 is a midsize luxury SUV available in two trim levels: 3.0si and 4.8i. Standard equipment on the 3.0si includes 18-inch wheels, adaptive xenon headlights, cruise control, a panoramic sunroof, dual-zone climate control, 10-way power front seats with driver memory, a power tilt-telescoping steering column, vinyl "leatherette" upholstery, the iDrive electronics interface and a 12-speaker sound system with two subwoofers, CD player and an auxiliary audio jack. Aside from its larger engine and the addition of leather upholstery, the 4.8i is pretty much identical.

The X5 comes standard with antilock brakes, traction control, stability control, brake drying and standby features, a rollover sensor, front side airbags and side curtain airbags for the first and second rows. A rearview camera and front and rear parking sensors are optional. The Insurance Institute for Highway Safety gave the 2008 BMW X5 its highest score of "Good" for both the frontal-offset and side impact crash tests.

The new X5's interior is one of the most elegant BMW has ever built. The dash is gently curved, with handsome wood inlays, generously sized air vents, oversized instrumentation and a truly gorgeous soft-feeling top that unifies the whole design. The only sour notes are the all-in-one iDrive controller and the optional third-row seat. Despite recent improvements, the iDrive system still annoys many drivers with its complexity, and the third-row seat is acutely lacking in spaciousness, even compared with those in other midsize crossover SUVs. Although not a deal-breaker, the electronic gear selector is also rather odd, resembling a joystick found on the bridge of the starship Enterprise. With the second- and third-row seats folded, the X5 has 75 cubic feet of cargo space available, which is about average for this class of vehicle.

The 2008 BMW X5 is simply one of the best-handling midsize luxury SUVs you can buy. Some competitors offer more utility and many are more adept off-road, but the X5 does an amazing job of taking the sensations and talents of BMW's legendary sport sedans and translating them over to the SUV world. This is particularly true when it is fitted with the optional active dampers and stabilizers. The optional active steering system does indeed ease parking maneuvers as it sharpens the steering ratio considerably at low speeds, though the downside is reduced steering feel. The X5 has an agreeable ride quality, but those looking for a Lexus-like comfy-couch ride may find this Bimmer a little harsh.