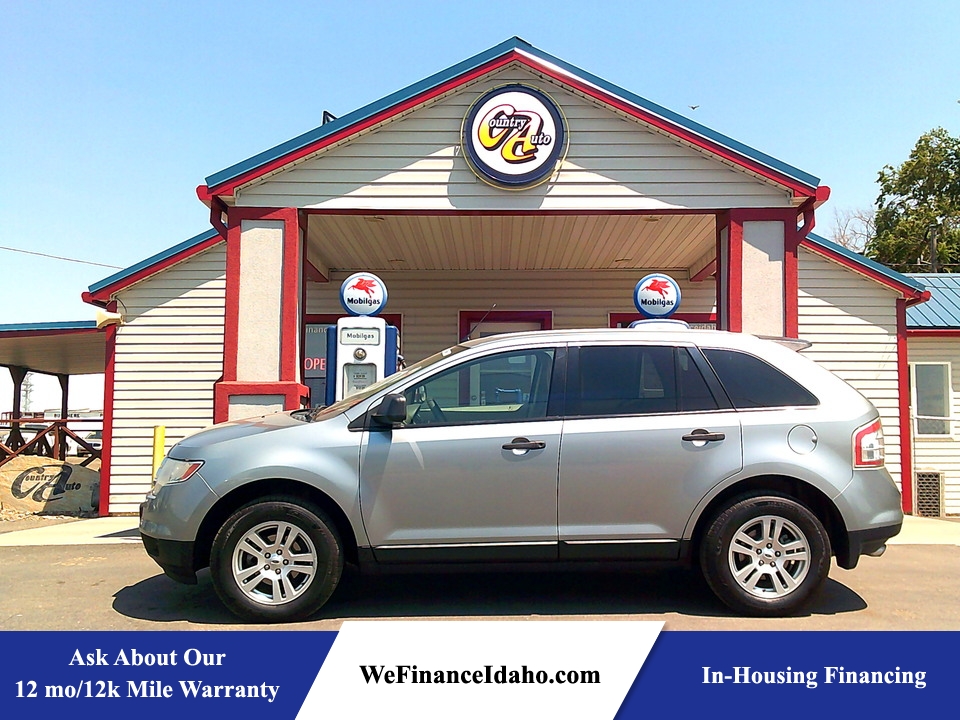 With ample power under the hood, balanced handling and spacious passenger quarters, the new 2007 Ford Edge stacks up well against the other midsize crossover SUVs in its price range. Unfortunately, underpowered brakes sully its otherwise impressive credentials.

The 2007 Ford Edge is an all-new midsize crossover SUV with seating for five. A 265-horsepower V6 is standard.

The midsize crossover SUV segment is fast becoming as important as the midsize sedan segment, as more and more families are discovering the useful compromise of utility and efficiency these vehicles provide. Ford's first midsize crossover, the Freestyle, didn't go over too well with this audience, however, as its weak V6 engine and conservative styling sent its coolness meter plunging to minivan levels. But we think it will be different for the 2007 Ford Edge, which seats only five passengers but offers a powerful V6 and a striking exterior design that could never be called uncool.

Ford's new midsize SUV shares most of its mechanicals with the Mazda CX-9, including its new double-overhead cam 3.5-liter V6 rated for an impressive 265 horsepower. However, the Edge has a different six-speed automatic transmission than the Mazda, along with a simpler, viscous-coupling all-wheel-drive system. Additionally, with only two rows of seating, the Ford rides on a slightly shorter wheelbase and is 14 inches shorter nose to tail. Passenger room is generous in both the front and rear seats, and features like a telescoping steering wheel and reclining rear seats ensure long-haul comfort. The overall interior design is fairly bland, but families will find it functional day-to-day, and a full set of side airbags keeps everyone safe. Out on the road, the Ford Edge is one of the quicker SUVs in its class and manages to provide both sporty handling and a smooth, quiet ride. As with most of its peers, off-roading is not really within its grasp, but equipped with AWD, it should make a fine winter-weather vehicle. Unfortunately, the Edge has one major weakness: its brakes. Pedal feel is solid, but stopping distances are much longer than they should be in panic situations.

Aside from that, the 2007 Ford Edge offers a solid package for the would-be midsize-SUV buyer who doesn't need a third-row seat. Its cabin furnishings aren't as upscale as those of peers like the Honda Pilot, Hyundai Santa Fe and Toyota Highlander, but the Ford offers much better driving dynamics. That leaves the Mazda CX-7/CX-9, Mitsubishi Endeavor and Nissan Murano as its closest competition. While the Edge can't match the hard-core athleticism or interior style of the Mazdas, it offers a solid all-around package, combining equal parts comfort, power and space in one attractive body. As likable a vehicle as the Ford Edge is, it's hard for us to recommend a mainstream family vehicle with questionable brakes. We hope Ford will see fit to address this issue soon.

Major options for the SEL and SEL Plus include the Vista Roof (a power front sunroof and fixed rear skylight), an upgraded nine-speaker sound system, a DVD-based navigation system and a rear entertainment system. The factory entertainment system cannot be combined with the Vista Roof; however, Ford dealers can install a dual-screen system that mounts the displays in the front headrests. Satellite radio and Class II towing preparation are available on all Ford Edges.

Every Ford Edge comes with a 3.5-liter V6 rated for 265 hp and 250 pound-feet of torque. A six-speed automatic transmission is standard. All trim levels are available with either front-wheel drive or all-wheel drive. On AWD models, power flows primarily to the front wheels until wheel slippage occurs, in which case nearly 100 percent of it can be redirected to the rear. Gas mileage is average for a midsize crossover SUV, with an 18 mpg city/25 mpg highway rating for the front-drive Edge and a 17/24 mpg rating for the AWD. Properly equipped, the Ford Edge can tow up to 3,500 pounds.

All major safety equipment is standard on the 2007 Ford Edge, including antilock disc brakes, stability control (with rollover avoidance logic), front-seat side airbags, full-length side curtain airbags and a tire-pressure monitor. Rear parking sensors are optional on SEL and SEL Plus models.

Ford's designers didn't take many risks with the Edge's interior, and the result is a rather ordinary-looking decor with average materials and a sea of look-alike buttons from the Ford parts bin. Still, it's a functional and well-organized setup. The telescoping steering wheel offers a huge range of adjustment, allowing drivers of any size to get comfortable. The rear seats recline, making it easy to stretch out on long road trips, and the optional Vista Roof imparts an airy feel. Cargo space is a healthy 32 cubic feet with the backseat in use. Folding the seats opens up a not-so-flat cargo floor and a max capacity of just under 70 cubes -- considerably less than most competitors.

The new 3.5-liter V6 won't blow you away with its low-end response, but once it revs up a bit, the 2007 Ford Edge feels pretty quick. Shifts from the six-speed automatic are smooth and well-timed, though we wish there was better manual access to gears. (You're limited to "D," "O/D off" and "L.") Although the Edge isn't tuned to be a serious athlete, its reflexes are nonetheless impressive for a 4,300-pound vehicle. Body roll is predictable, and the steering feels right whether you're blasting down the highway or entering a tight turn. Ride quality is smooth and composed, and the cabin stays very quiet in most situations. The brakes are the major disappointment: Pedal feel is progressive, but during instrumented testing conducted at our test track, a 2007 Ford Edge test vehicle needed 152 feet to stop from 60 mph. Its competitors stop in the 120s.