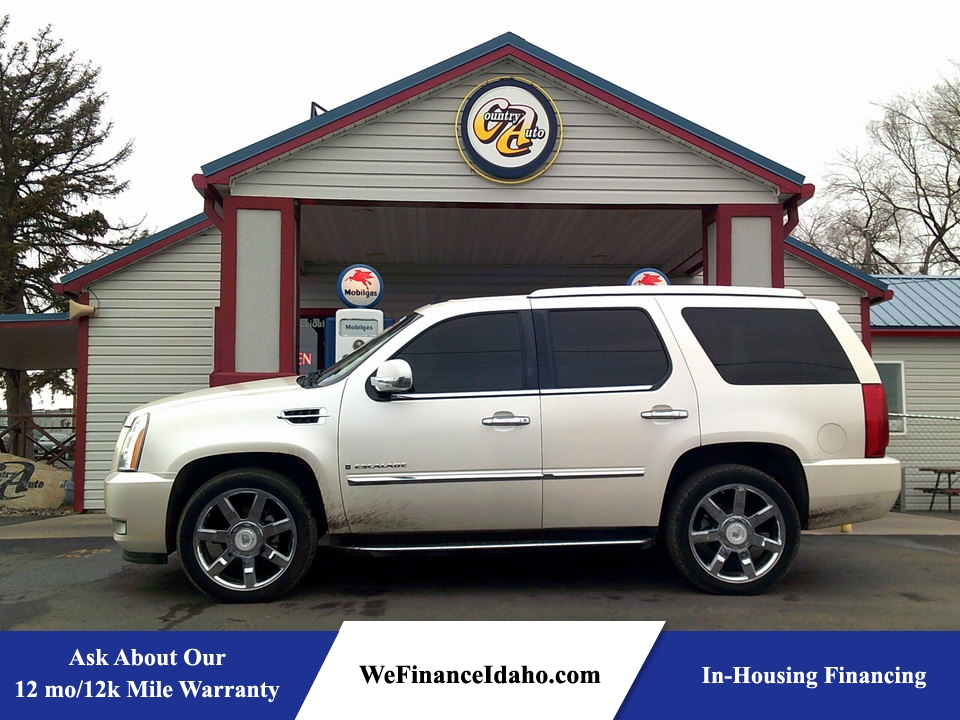 With many key improvements, the popular 2007 Cadillac Escalade should remain a fixture in the luxury SUV segment.

The Cadillac Escalade is completely overhauled for 2007. The most notable changes include a more spacious cabin with upgraded materials, a more powerful 6.2-liter V8, a six-speed automatic transmission and available power-folding second-row seats and head curtain airbags. In addition, the powertrain warranty is extended to 5 years/100,000 miles.

After its humble debut back in 1999, Cadillac's Escalade hit its stride in 2002 when the second generation bowed. Just on its own, the truck was impressive thanks to its brash styling, plush seats and powerful V8 engine. The Escalade also received plenty of celebrity-influenced media exposure, which further bolstered its status with consumers. For 2007, a fully redesigned Cadillac Escalade debuts with the promise of more performance, more luxury and more bling than the 2006 model.

Like its lower-line siblings, the Chevrolet Tahoe and GMC Yukon, the 2007 Cadillac Escalade is built on General Motors' all-new, full-size SUV platform. Increased frame stiffness and rigidity, a new suspension design with coil-over shocks up front and a five-link setup out back, and rack and pinion steering (which replaces the old recirculating ball system) make for more composed handling and a smoother ride than before. A 6.2-liter V8 and a six-speed automatic transmission are also new this year. GMC's Yukon Denali also gets this drivetrain, but the Escalade gets an exclusive, high-output version of the V8 good for 403 hp. On the outside, the new Escalade maintains its angular styling, but the overall look is sharper, more cohesive and bears more of a family resemblance to other Cadillac models. Interior fit and finish has also been addressed. The 2007 Escalade's interior is of higher quality than last year's model, and is notable by its soft-touch materials, tight gap tolerances and stylish design.

Considering what's important in the luxury SUV segment -- style, luxury, features, power -- the 2007 Cadillac Escalade excels. Like-priced competitors such as the Infiniti QX56 and Lincoln Navigator may edge it out in one area or another, but overall the Escalade is a superior vehicle. In our opinion, paying a lot more money for a Lexus LX 470 or Land Rover Range Rover is an exercise in diminishing returns. Unless you're an avid off-roader, these vehicles provide little if any worthwhile benefit over the Escalade.

The Cadillac Escalade is a full-size luxury SUV. There is only one trim level, and it's packed with standard equipment. In addition to the usual array of features, the Escalade has a power liftgate, an automatic road-sensing suspension, park assist and even a heated windshield washer fluid feature. Inside, one will find triple-zone climate control, power-adjustable pedals, heated first- and second-row seats, remote starting and OnStar. A Bose 5.1 Surround Sound audio system with 10 speakers, XM Satellite Radio and an in-dash six-CD changer is also standard. Optional are cooled front seats, a heated steering wheel, power-folding second-row seats, a navigation system, rearview camera, moonroof and rear-seat DVD entertainment system.

The 2007 Cadillac Escalade comes standard with a 6.2-liter V8. It pumps out 403 hp and 417 lb-ft of torque and is one of the most powerful engines available in a luxury SUV. Making the most of the new engine's broad power spread is a new six-speed automatic transmission that offers a manual-shift mode. The Escalade is available with rear-wheel drive or all-wheel drive. All-wheel-drive versions feature a default 40/60 front/rear power split. Escalades seldom go off-road, so there is no dual-range transfer case. Towing capacity for the AWD model is 7,400 pounds.

Stability control (dubbed "StabiliTrak") with a rollover sensor is standard, as are four-wheel antilock disc brakes, side curtain airbags for all outboard occupants, a tire-pressure monitoring system and the OnStar telematics system.

The Escalade's two-tone dash has graceful lines that easily accommodate a large, colorful navigation screen and faux walnut inlays (although at this price, they should be real wood). The nav screen has a user-friendly touchscreen interface, and all controls are easy to find and use. Soft-touch surfaces are everywhere, as they should be in this class, but there are still a few cheap plastics in the rear of the vehicle. The Escalade can be equipped to accommodate six, seven or eight occupants. To improve third-row access, there is a power fold-and-flip option for the second-row seats. The third-row seat still doesn't fold into the floor as in the Lincoln Navigator or Infiniti QX56. This is a result of packaging constraints: The Escalade has a solid rear axle while the Navigator and QX56 have independent rear suspensions that provide more room between the rear wheels. The Escalade still leads the class in cargo capacity -- 60.3 cubic feet with the third-row seats removed and 108.9 cubes with the second row folded.

With all that power on tap, the 2007 Cadillac Escalade is quick for a big SUV. Zero-to-60-mph estimates are pegged at less than 8 seconds. And with six gears in the transmission, there is always a surge of power underfoot for swift passing and merging maneuvers. Tuned for a luxurious ride, the Escalade makes no pretense at being sporty. The handling is composed, but this truck's reflexes are muted. Around town, a relatively tight 39-foot turning circle makes parking a bit easier. Aimed for the horizon on an interstate, there aren't many better cruisers, as the ride is notably quiet and the supple suspension smothers the bumps without feeling sloppy when the turns come up.