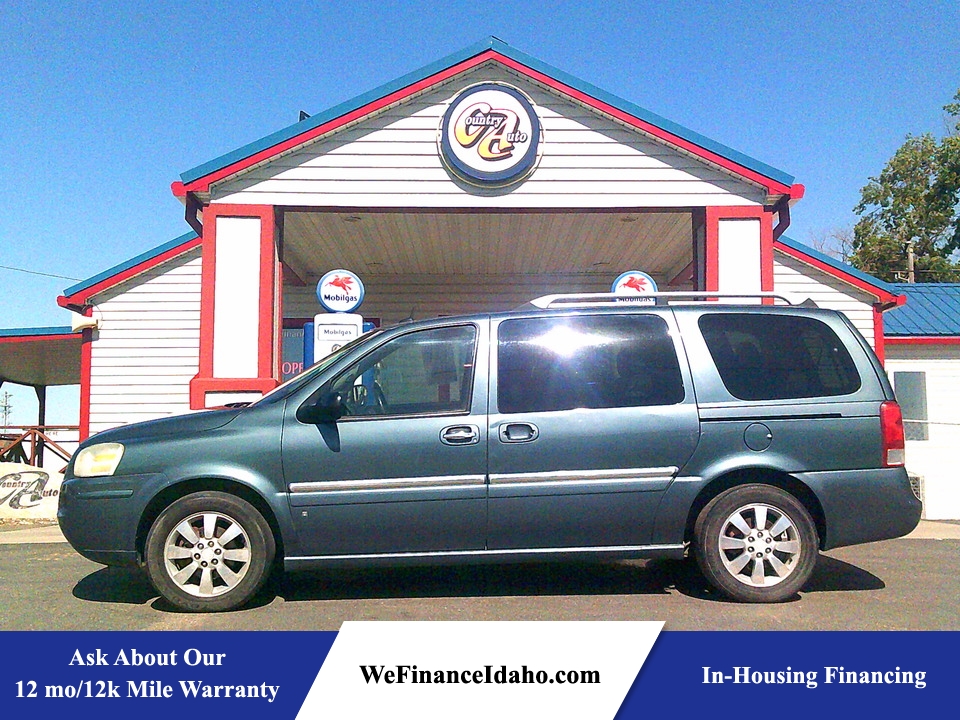 Although the 2007 Buick Terraza features a well-designed interior and distinctive styling, it can't match the leaders in the minivan class in terms of on-road finesse.

The 3.9-liter V6 is now the standard engine on the Buick Terraza, and the all-wheel-drive version has been discontinued.

With Buick branding itself as an upscale division, it was only a matter of time before the company tossed its hat into the luxury family mover ring. Striving to avoid the soccer mom image and capture the one engendered by the SUV, Buick calls its modified minivan a "luxury crossover sport van." With its taller stance and proud nose, the Buick Terraza aims to avoid the snub-nosed school of people-mover design. Honestly, we still think of it as a minivan with a big nose. But whatever you want to call it, this type of vehicle still makes more sense for carrying six or seven people in comfort than a less space-efficient (and usually larger and thirstier) SUV.

Sharing its platform with GM's other minivans, the 2007 Buick Terraza does have a few distinctions in addition to exterior styling tweaks that are designed to foster an upscale feel. An abundance of nicely finished leather and wood trim in the top versions provide a level of opulence not seen in the Terraza's more down-market cousins. Stability control and first- and second-row side airbags are standard, but most competitors now offer side airbag protection for all three rows.

This year, the four-wheel-drive version is dropped, as is the 3.5-liter V6. Though the 3.5-liter V6 performs reasonably well in other GM applications, it was simply outmatched by the Terraza's 2-ton-plus mass. Now, the bigger 3.9-liter V6 that was previously optional is standard, making the Terraza more competitive with the likes of the Odyssey and Sienna. Although it's easy to be wooed by the Terraza's luxury ambience, thoughtful amenities and now-respectable performance, it still lags behind the class standouts that offer a little more in the way of responsive driving dynamics and safety features. We suggest taking a look at the class-leading minivans before settling on the Terraza.

A 3.9-liter V6 with 240 horsepower and 240 pound-feet of torque is standard on all Terrazas, and it puts this Buick on equal footing, power-wise, with the class leaders. A four-speed automatic transmission is standard. For 2007, all Terrazas are front-wheel drive.

Standard safety features on all Terraza trims include stability control, four-wheel antilock disc brakes and traction control. The CXL also has seat-mounted side-impact airbags for the first two rows that provide both head and torso protection in side impacts. Most competitors also offer head protection for third-row passengers, however. In NHTSA testing, the 2007 Buick Terraza earned five out of five stars for its protection of the driver and front passenger in frontal impacts. In the frontal offset crash testing conducted by the IIHS, the Terraza earned the top score of "Good." NHTSA side-impact testing (on a Terraza without side airbags) resulted in a four-star score for front-passenger protection and five stars for rear passengers. In stricter IIHS side-impact testing, however, a Terraza with side airbags rated "Marginal" (second lowest on a scale of four). In addition, the second-row seat came unbolted from the floor during the test, a problem that GM is currently investigating.

The Terraza can accommodate up to seven people. To carry cargo, its second- and third-row seats fold down to provide up to 137 cubic feet of volume. The cabin looks and feels luxurious thanks to convincing faux wood trim, and the double-stitched leather seats with contrasting piping are particularly elegant. One handy feature is a modular roof rail system that allows one to adjust components such as the standard DVD player and storage compartments. Also included are folding center trays between the first- and second-row seats. A rear-seat DVD entertainment system is standard on all Terrazas, and optional is a PhatNoise digital media system. An available remote vehicle start system allows one to heat up or cool down the cabin before getting in, a nice feature for those who live in extreme climates.

Although the Buick Terraza weights nearly 4,500 pounds, the 3.9-liter V6 is up to the task of providing respectable acceleration around town and ample power for merging and passing on the freeway. The suspension strikes an agreeable balance between ride comfort and responsive handling, but competitors like the Honda Odyssey and Toyota Sienna offer sharper reflexes and a smaller turning radius. The Terraza's braking distances are also longer than they should be. Despite Buick's QuietTuning technology, cabin noise levels are not as hushed as expected and are above average for the class.