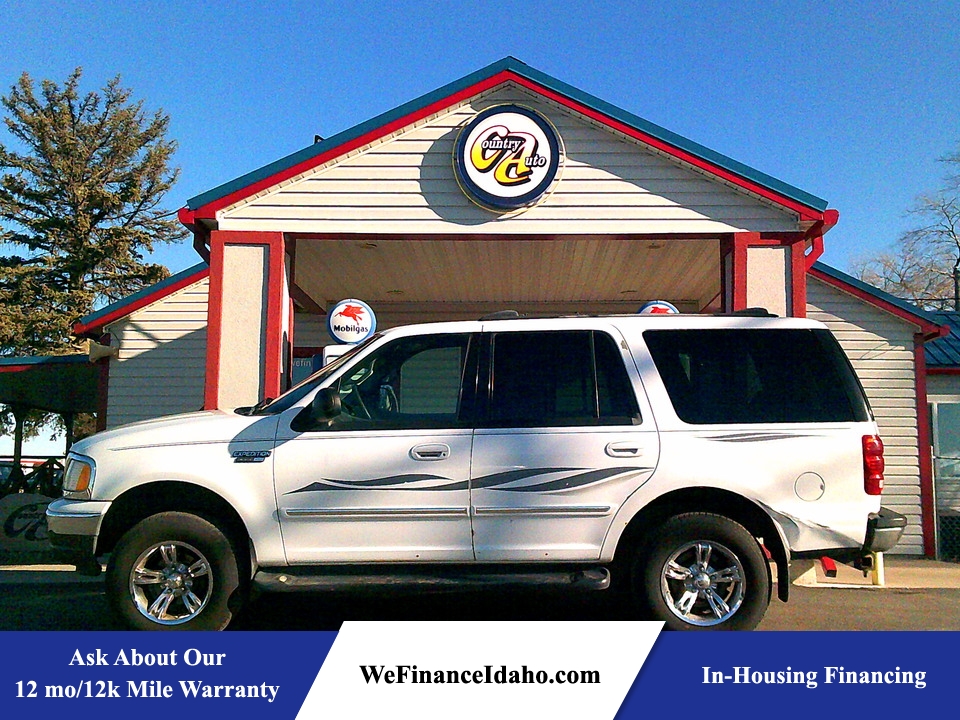 The all-new 2003 Expedition looks to be class leader in the large SUV segment.

Ford's full-size SUV sports changes inside and out. Outside, the Expedition looks bigger and bolder. Some of its new styling cues, such as the egg-crate grille and raised hood, are from its little brother, the Explorer. Inside you'll find fold-flat second- and third-row seats, with a power-folding option for the third row. The second row is split-40/20/40 enabling the middle section to slide forward. The Eddie Bauer package has an in-dash six-disc changer (optional on the XLT) and steering wheel-mounted stereo and climate controls, as well as an optional DVD player, navigation system and heated-cooled seats.

But the big changes are the ones you can't readily see. Underneath the skin a double-wishbone independent rear suspension system and a rack and pinion steering configuration improve road handling. AdvanceTrac stability control, along with ControlTrac four-wheel-drive system and an increased width of 1.7 inches should help keep the rubber down and the shiny side up.

A general sense of dissatisfaction spread over Fordland in the mid-'90s when it realized that GM held a monopoly on full-size SUVs with its Chevy Tahoe and Suburban. With SUV sales booming and consumer trends pointing toward a desire for bigger and more powerful vehicles capable of hauling as many as nine passengers or more than 100 cubic feet of cargo, Ford found itself without a competitive edge in a hot market niche. When the redesigned F-Series pickup debuted for 1997, Ford engineered a proper large SUV on its platform. The Expedition was introduced with much fanfare that same year, finding favor among buyers whose only other choices were GM SUVs built on the decade-old C/K pickup frame. The Expedition was stiffer, powered by more modern overhead cam engines, and sized to slot nicely between the SUV twins from Chevrolet and GMC. Instantly popular, the Expedition became one of Ford's hottest sellers. But when GM redesigned the Silverado and Sierra pickups for 1999, new Tahoes, Yukons and Suburbans were also released into the marketplace. The revamped Chevys and GMCs could all carry nine, and as an added benefit, the rearmost seats in the Tahoe and Yukon were easier to remove because they were split and lighter in weight. Additionally, the GM pushrod V8 engines were tweaked for more power and refinement, and were worlds ahead of the comparatively weak Ford power plants. Then Toyota entered the fray with the eight-passenger Sequoia SUV, powered by a creamy-smooth, Lexus-sourced 4.7-liter V8 engine. Based on the Tundra pickup, the Sequoia wore a sticker with a price premium, but consumers wanted that virtual guarantee of reliability that comes along with the Toyota nameplate, and they lined up to buy the hulking new SUV. Shortly after the debut of the Tundra, Expedition sales were propped up with lease subsidies and rebates. Special-edition trim packages were also offered to spawn interest. It was, at just four years of age, the oldest design in its segment. But Ford was already hard at work on creating a replacement. The 2003 Expedition is almost entirely new, carrying over only parts that the buyer cannot see. Bigger, more comfortable, more refined and easier to drive, the redesigned Expedition competes favorably with the SUVs from General Motors and Toyota, offering creature comforts not found in competing vehicles. If the new Expedition has an Achilles' heel, it is that the powertrains are virtually carried over from the previous model with no power upgrades. Still, there is plenty to like about the new super-sized SUV from Ford, and those shopping for such a vehicle will certainly want to take it under consideration.

Four trim levels are available. The base model, the XLT Value is your basic, no-frills workhorse that comes with a CD player, air conditioning, a flip-up rear hatch window and power-adjustable pedals. The Popular package will add running boards, rear-seat climate controls and auto-dimming mirrors. Step up to the Premium package to get power seats covered in leather and a floor console. To go hog wild, choose the Eddie Bauer package with a trip computer, automatic climate control, a reverse sensing system and an in-dash six-disc CD changer. Most of these items are available as stand-alone options. Other goodies include a CD-based navigation system, DVD entertainment system, a power fold third-row seat, heated-cooled front seats and tire-pressure monitors. All four of these trim levels can be had with the 4.6-liter or 5.4-liter power plants, whose power can be delivered to the two front or all four wheels.

The Expedition's standard 4.6-liter V8 makes 232 horsepower and 291 pound-feet of torque. Step up to the bigger 5.4-liter mill, and you'll be rewarded with 260 horsepower and 350 lb-ft of torque. Numerous refinements for 2003 render both engines extremely smooth and quiet, but they still lack the punch of GM's more powerful Vortec V8s. A four-speed automatic continues as the sole transmission. A heavy-duty rear differential gives the Expedition a maximum tow rating of 8,900 pounds, the highest in its class.

Last year's Expedition received double five-star ratings in front crash tests, so we expect that this year's will score the same. All Expedition's come standard with four-wheel ABS-equipped disc brakes enhanced with Electronic BrakeAssist and Brakeforce Distribution. Optional safety systems include a tire-pressure monitor system, and a class-exclusive Safety Canopy System that provides side- and head-impact protection for both the first- and second-row passengers. Eddie Bauer and FX4 models also offer the AdvanceTrac stability and traction control system.

You can choose to equip your Expedition with second-row captain's chairs, which will seat eight or the bench seat to accommodate nine. Choosing the bench seat will allow you to scoot the middle section forward due to the 40/20/40-split configuration design. Most of the gee-whiz features, like the power-folding third-row seat and the entertainment and navigation systems, are available on the Premium trim and Eddie Bauer edition only, but getting either of those is a lot more economical than springing for a Lincoln Navigator.

The all-new independent suspension and rack and pinion steering system have dramatically improved the Expedition's handling dynamics. It still feels like a big SUV, but the excessive body roll and numb steering of last year's model are gone. The stiffer frame and body shell combined with the reworked suspension and reduced noise levels makes this Expedition a very comfortable cruiser. The 5.4-liter engine still lacks punch, but noise and vibration levels are down there, too, so at least it feels more refined underfoot. It's not as nimble as the Sequoia or as fast as the Tahoe, but it's smooth, quiet and capable enough to make a great family vehicle.